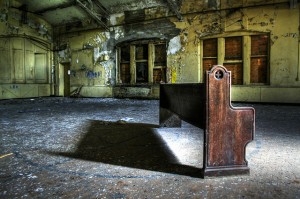 Recently, a somewhat opaque term found its way onto the front page of The Immanent Frame in the title of Daromir Rudnyckyj’s piece on “post-secular development.” This term, “postsecular,” also came up a few months ago in Nathan Schneider’s interview with Simon During as well as a string of other entries in this blog over the past few years. A group of contributors to The Immanent Frame, including its founding editor Jonathan VanAntwerpen and editor-at-large David Kyuman Kim, are even involved in editing a volume called The Post-Secular in Question. Apparently the term is quickly becoming a keyword for scholars of religion and public life. So, what is it all about?

The concept is not just all over The Immanent Frame. It has also appeared in the titles of about forty books, most in English and German, the majority of which were published within the past five years. Additionally, the concept features prominently in seventeen dissertations indexed by ProQuest, which largely reflects dissertations completed at North American universities. More than half of these dissertations were deposited after 2007. And that is to say nothing of the dozens of articles in scholarly journals that are an important part of the discussion of the postsecular, or the approximately half-dozen academic conferences held on both sides of the Atlantic in the last three years. These numbers indicate that both established and emerging scholars are staking their work on the concept of the postsecular. Finally, illustrating a broader trend in intellectual debate, significant interventions in the discussion have also appeared online, especially at Eurozine, ResetDOC, and on this very blog.

For over a decade now, the concept has been appearing at an ever increasing rate in academic debates in a number of different areas. The watershed event for several of these debates was a speech given by the renowned German philosopher and sociologist Jürgen Habermas on the occassion of his being awarded the Peace Prize of the German Book Trade, in October 2001. However, Habermas’s speech, called “Faith and Knowledge,” is not the only impetus behind these discussions. In fact, some uses of the postsecular predate his speech, and they range across a wide variety of literatures. A few months ago, I tried to get as comprehensive an overview as possible and found that the concept has been used in cultural and literary studies, theology, philosophy, sociological theory and the sociology of religion, political theory, postcolonial thought, feminist thought, and even in urban studies. Reflecting the challenging reality of interdisciplinary work, some of the recurring themes in discussions of the postsecular are exploration, mapping, positionings, going “beyond” something, or being “between” two things. In what follows, I want to briefly summarize some of the recurring themes in these explorations.

In his 2001 speech, Habermas reflected on the tensions between secular society and religion—a reflection prompted, first and foremost, by the terrorist attacks on U.S. soil a few weeks before, on September 11, 2001. The question of religion came up for two reasons: first, because the perpetrators of the attacks were motivated by religious convictions; and second, because the event had religious resonances in western publics as well. Noting that fundamentalism and the means it employs are thoroughly modern, Habermas used Ernst Bloch’s concept of nonsynchronicity (Ungleichzeitigkeit) to account for the disconnect perceived by many living in the Islamic world. Social and cultural development, he noted, are out of sync in the parts of the world where modernization was particularly rapid. Even in Europe, where processes of social change were much slower and gentler, secularization evokes ambiguous emotional responses, as evidenced by controversies surrounding genetic engineering.

In order to bridge the rift introduced by this nonsynchronicity, a common language must be developed, as Habermas put it, “beyond the silent violence of the terrorists or the missiles.” This “rift of speechlessness” does not only run along the dividing line between the Islamic world and the West, but through European societies as well. Thus, westerners will only know how to respond to terror perpetrated by nonwesterners if they gain an understanding of their own “postsecular societies.” In order to foster such understanding, the conception of secularization as a “zero-sum game” between science and technology, on the one hand, and church and religion, on the other hand, must be abandoned. A vision mediating between the triumphalist, scientistic view of secularization and the pessimistic evaluation of secularization as cultural decline must be found—a position Habermas calls “democratically enlightened common sense.” For religious believers this means reflexively coming to terms with the reality and authority of pluralist society, scientific knowledge, and the constitutional state. The liberal state, on the other hand, must engage with all voices in the public and not allow secular majorities to silence those who voice moral reservations in religious terms. The liberal vocabulary of contractualism, rational choice, and utility maximization is not sufficient to articulate a social bond. Here, Habermas followed Ernst-Wolfgang Böckenförde, who famously posed the dilemma of the liberal state thus: “The liberal secular state lives on premises that it is not able to guarantee by itself.” Habermas went on to argue that for this reason, a translation of religious positions is necessary. Habermas cited Kant’s postmetaphysical ethics as an example for the approach he envisioned, since it recognizes the limitations of enlightened self-interest.

But the concept of the postsecular was in circulation even before Habermas’s now-famous speech. In the pre-2001 period, it was used most often by theologians affiliated with postmetaphysical or postliberal theology or with Radical Orthodoxy. As such, it was often associated with other “posts,” especially postmodernism. Often the concept was used to refer to the inconsistencies of secularist epistemology or the limitations of secular reason. Finally, the concept was sometimes used in association with secularization and the persistence or revival of religion in modern society. Thus, Habermas, in choosing to use this concept in his October 2001 speech, opted for a concept that was already laden with associations.

Sociological theory and the sociology of religion

Almost immediately following Habermas’s speech, sociologists in Germany began to discuss his concept of “postsecular society” as part of a popular genre called soziologische Gegenwartsdiagnose (sociological diagnosis of the present). Throughout this discussion, which later spread to English-language sociology publications as well, the question recurred, whether an epochal shift really had occurred. While few accepted this proposition without qualification, the concept of postsecular society found its way into numerous areas of sociological research, framing empirical studies much in the way that concepts like postindustrial society or information society have.

The question of secularization theory and whether it should be abandoned forms an important part of this discussion. Only sociologists allowing that classical secularization theory is in disarray find the concept of the postsecular to have any value. Whether or not one grants as much generally hinges on scholars’ views regarding the purported “return of religion” or “religious resurgence” in contemporary public life. Some, like Detlef Pollack, completely deny that this is happening in a way that would challenge orthodox secularization theory; others, like Bryan Turner, do not deny such a return, though they have reservations about the consumerist character of the booming religiosity; still others, like Hans Joas, practically take the continued relevance of religion for granted.

Philosophers writing about the postsecular tend to emphasize ethics. They consider the conditions of possibility of ethics in pluralist societies, and whether or not postsecular societies hold any new sources of ethical commitment in store. These questions were first debated in the work of William Connolly, most famously in his book Why I Am Not a Secularist (1999). In addition, philosophers debating the postsecular also consider epistemology, for instance, with reference to Radical Orthodoxy’s critique of sociology and its reductionist logic of explanation. This is true of Philip Blond’s volume Post-secular Philosophy and John Milbank’s Theology and Social Theory. In response, a recent volume pushes back against what it perceives is a one-sided “theologization of philosophy.” Finally, ontological concerns are also subject to debate, for instance in discussions of the “vibrant” nature of matter and other vitalist philosophies in the line of Spinoza or Deleuze.

The parallel discussions in literary studies and theology often appear like two sides of the same coin. Literary scholars challenge the view that late-modern cultural production is thoroughly secularized, pointing out that writers like Thomas Pynchon or Richard Powers either have spiritual themes in their work or fuse the secular with the religious through the use of intertextuality. Theologians, meanwhile, emphasize the growing indistinction between religious and secular forms, leading the German Catholic theologian Hans-Joachim Höhn, for example, to suggest using the term “postreligious” alongside “postsecular” to refer to the kinds of religious forms manifest in late-modern society. In the cultural studies as well as the theological literature, there is a recognition that culture and religious forms mix and mingle freely; they do not exist in mutually exclusive watertight compartments. As a result, the classical assumptions of both disciplines have been unsettled.

Questions of politics, especially on the presumed future trajectory of liberal-democratic states, play an important role in discussions of the postsecular. They were at the forefront of Bill Martin’s largely ignored work on Derrida and postmodernity, in the early 1990s, in which he attempted to provide the groundwork for a “postsecular socialism,” which would withstand the corrosive effects of bourgeois secularism on human communities. More recently, the concept has featured in Simon During’s Exit Capitalism and Ananda Abeysekara’s The Politics of Postsecular Religion, as well as the work of Rosi Braidotti, who states that a “postsecular turn” has taken place in feminism. In addition, the concept also appears in more conventional fora for political theory, such as the journal Constellations.