On the call from outside 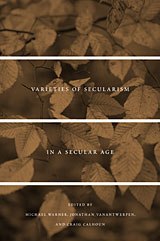 In Akeel Bilgrami’s contribution to Varieties of Secularism in a Secular Age, “enchantment” refers to the historical belief that God or his divine expression is accessible to the everyday world of “matter and nature and human community and perception.” Correspondingly, “disenchantment” refers to that shift in perspective (encouraged by early modern science and its mechanistic model of nature) by which God was exiled from nature. Bilgrami’s ultimate aim is to “reenchant” the secular age by affirming the “callings” of a world laden with “value elements.” I will say more below about this interesting notion of a call from outside and its role in ethics; let me point out now that the processes of “enchantment” and “disenchantment” are for Bilgrami, as for Charles Taylor, essentially shifts in theological orientation, different views of the relationship between God and nature.

This, of course, is not the only way to understand enchantment and disenchantment, which could also be figured in the first instance as a mood or affect circulating between human bodies and the animal, vegetable, and mineral forces they encounter. This is the approach I took in The Enchantment of Modern Life (and developed in Vibrant Matter), where enchantment is associated with the feeling of being simultaneously fascinated and unnerved in the presence of something truly wild or Other. The point here is that enchantment is not so much a belief as it is an energetic current produced by the encounter between two sets of active materialities, one set congealed into a “self” and one into what is often called the “objects of experience” but is better described, I think, as a set of nonhuman “actants.” Following Bruno Latour, I say actants rather than objects in order to acknowledge the extent to which these external bodies are lively and active forces rather than passive or brute matter. These vibrant animals, plants, viruses, hurricanes, storms, pharmaceuticals, and other technological artifacts vie with, make demands upon, and impede and enable human agency. They make their presence known to us, or, to extend Bilgrami’s use of the term, make “calls” to which we are continually responding.

Bilgrami too seeks to displace the idea that the world is brute matter, but the ultimate source of its calling-capacity is for him cultural (and, as I will discuss later on, moral) to a more exclusive degree. “The point,” he writes, “is not that nature in some self-standing sense is to be understood as enchanted, but rather that the world, understood as nature in its relations with its inhabitants, and a tradition and history that grows out of these relations, comprises the external evaluative enchantment.” In contrast, the (nonmechanistic) materialism I endorse and invite Bilgrami to consider presents modernity as “enchanted” with with multiple modes and degrees of material (and not only human or cultural) agency. Absorbing and alienating encounters with electronic, pathogenetic, bacteriological, climatological, and other forms of nonhuman agency abound today, and thus the mood of enchantment most definitely survives the demise of the (premodern, European, Christian) experience of nature as directly inscribed with divine purpose. There is thus no need (contra Bilgrami) to “re-enchant” the secular world, though there remains the task of becoming more sensitized to the enchantments, the callings, already at work.

What, more explicitly, are the implications for ethics of the mood of enchantment? In the wake of Schiller’s critique of Kantian morality as too disembodied (echoed in Foucault’s work on ethical ascesis), I understand ethics as requiring both principled beliefs (and duties) and also a set of moods, sensibilities, and bodily comportments hospitable to carrying them out. My contention is that the intensity of the compound mood of enchantment (wonder/disturbance) could serve as one impetus to ethical action, insofar as it contributes the energy or motive force needed to render human bodies capable of jumping the gap between mere conviction that a course of action is good and the actual doing of the deed. What Spinoza called the “joyful” affects are needed to energize a body called upon—by habit, sympathy, or reason—to love, forgive, treat with compassion or minimized harm to (an ontologically diverse range of) others. In short, I think that, under the right circumstances, the mood of enchantment, which entails the experience of the outside as making a call, can be an important part of ethics.

Bilgrami, too, is interested in the ethical implications of enchantment. He begins with the intriguing claim that the call from outside serves as the very condition of possibility of human will and therefore agency: to desire to have or to do something is to experience that thing or activity as “desirable rather than as desired,” as, in other words, a response to an external call. What is more, the very experience of ourselves as moral subjects depends upon this experience of a world of outside objects: “in the very moment and act of perceiving values without, we also perceive ourselves within, as subjects rather than as objects. The experience of value without and agency within are not two different and independent experiences.” In short, “it is only because the world itself contains desirabilities (or values) that we perceive that our agency really gets triggered or activated. The very possibility of agency therefore assumes an evaluatively enchanted world.”

Based as it is upon an assertion of the constitutive interdependence of the notions of subject and object, this argument makes good sense. But it also reveals the extent to which Bilgrami and I have different views of human agency—what composes it, how it is activated and sustained. I think that human agency is best conceived as the effect of a perspicuous configuration of human and nonhuman forces. When humans act, they do not exercise exclusively human powers, but express and inflect the powers of a variety of “foreign” bodies internal to them, including bacteria in the human gut, heavy metals absorbed into flesh, words and sounds from human and nonhuman cultures, etc. There is a difference between these nonhuman actants and a human (compound) individual, but neither considered alone has real agency. The locus of agency is always a human-nonhuman collective.

Bilgrami himself makes a gesture toward the distributive quality of agency in his notion of an external calling from tradition and history, two complex assemblages formed by many different agents at work over different times and places. But these assemblages are not ones in which nonhumans qualify as real participants, though I imagine that Bilgrami would easily grant that climate, architecture, animals, vegetables, and minerals do serve as negative constraints or enabling contexts or environments for human action. Bilgrami steers clear of the kind of neo-animism I court: recall that “the point is not that nature in some self-standing sense is to be understood as enchanted, but rather that the world, understood as nature in its relations with its inhabitants, and a tradition and history that grows out of these relations, comprises the external evaluative enchantment.” This claim understates, I think, the degree of exteriority or “independence” at work in the call: the call of culture, while surely not as parochial as the “sympathies and moral sentiments” with which Bilgrami contrasts it, is not all that external. Bilgrami hints at, but does not explore, the possibility of nonhuman agency.

Another difference between us arises around the question of whether secular enchantment entails a world laden with “value.” Bilgrami clearly distinguishes his appeal to an external ethical source of value from Taylor’s position, which involves a transcendent source. I share Bilgrami’s nontheism, but the raucous world of vibrant matter I envision is somewhat at odds with the idea of intrinsic moral value. My “enchanted” materialism does council presumptive efforts to align ourselves with the complex, open system-quality of the universe. But it seems also more attentive than Bilgrami is to the fact that an emergent and generative universe is is not pre-designed to ensure human justice or happiness, is not fully predictable, and does not necessarily tend toward equilibrium. Thus Bilgrami’s quest for “a life of harmony between the demands of an external source and our dispositional responses to its demands” seems not quite right. A certain disharmony is built into the world at large and also into the mood of enchantment, which includes discomfort in the face of forms of material agency that one can neither master nor ignore. Thus it is that I find ethical utility in the experience of alienation, whereas Bilgrami seeks ways for secular moderns to live an “unalienated life.”

To summarize, then: Bilgrami figures the outside as a supra-individual field of human language, norms, customs—as, in short, a culture that precedes and exceeds us, and I conceive of the outside and its callings and threats as having a less exclusively human provenance, as the expression of material agency or what I’ve elsewhere described as “thing-power.” For me, these calls are what we actually can hear of the clamor of swarms of vibrant materialities, of technological and natural bodies in possession of what Spinoza described as the power to affect and be affected. I agree with Bilgrami that secular modernity is not a world of brute matter, that it is quite possible to speak of external calls without invoking or implying a transcendent, creator-God, and that learning how to discern, acknowledge, and appreciate such calls is an important part of ethics. But we have different understandings of what the call is and does.

Jane Bennett is Andrew W. Mellon Professor of the Humanities, in the Department of Political Science, at Johns Hopkins University. Her recent essays have appeared in Grain/Vapor/Ray (on Kafka's Odradek), Evental Aesthetics (special issue on Vital Materialism), and MLN (on mimesis). She is the author of Vibrant Matter: A Political Ecology of Things (2010); The Enchantment of Modern Life (2001); Thoreau's Nature (1994), and Unthinking Faith and Enlightenment (1987). Her latest book will appear in the spring of 2020 and is called Influx & Efflux: Writing up with Walt Whitman.