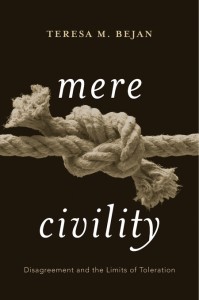 “At the height of the 2016 American presidential election, a colleague asked whether I was worried that my forthcoming book on civility might be overtaken by events. President Obama’s constant calls for Americans to “disagree without being disagreeable” now feel like an ironic epitaph to a bygone era of somewhat better feelings. With the inauguration of our new Incivilitarian-in-Chief, a man who has apparently elevated ad hominem to new heights of electoral success, surely the once perennial bloom is, at long last, off the “civilitarian” rose?”

So begins Teresa Bejan’s introduction to this forum on her new book, Mere Civility: Disagreement and the Limits of Toleration. Her important and timely new text explores, as she puts it, “our contemporary crisis of civility” by examining seventeenth-century debates about religious toleration. What still resonates from those early conversations? Whose theories can hold up in our modern day reality? By exploring the resonances between debates around civility and toleration, is there something new to learn?

In this series, scholars from various fields engage with Mere Civility, exploring these questions and more.

To continue reading the introduction to the series, click here. Or, find other responses below.

At the height of the 2016 American presidential election, a colleague asked whether I was worried that my forthcoming book…

George: This is what she said to me, “Can we change the subject?” Jerry: See, now that I don't care…

Mere Civility’s final rendering of the link between civility and the future is suggestive; it excavates a democratic ethos from…

As part of her argument in favor of mere civility, Bejan decisively rejects contemporary “civilitarian” claims that mutual respect and…

As an American teaching university in Canada, where the illiberal regulation of disfavored speech is increasingly common, I am tempted…

How to do things in with words

Bejan revisits early modern times of extreme verbal violence, sectarianism, and bloodshed with an eye on our own. Her brilliant…

"First, I must thank each of the contributors to this forum for their more than merely civil responses to my…