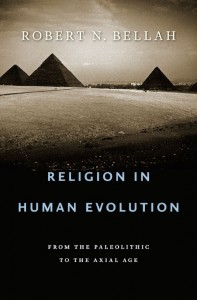 Thirteen years in the making, Robert Bellah’s Religion in Human Evolution reflects a lifetime of scholarship. Exhibiting a deeply interdisciplinary approach that makes use of biology, cognitive science, and evolutionary psychology—and that presents case studies of ancient India, China, Israel, and Greece—the volume seeks to unearth the historical and biological embeddedness of human religion. Bellah follows the evolution of human and religious culture from the Paleolithic to the axial age—mapping tribal, archaic, and finally axial religious forms—and sites the emergence of religion in the evolution of a range of cultural faculties and social arrangements that developed throughout this period.

While he states that this is “not a book about modernity,” Bellah holds that there are links “between past and present,” and that “nothing is ever lost.”

Where did religion come from?

When an interviewer for the Atlantic Monthly blog asked me “What prompted you to write this book?” I apparently replied,…

Weber for the 21st century

For almost one hundred years, all sociologists of religion have taken Max Weber’s great work on comparative religions as a primary point…

What should we now do differently?

Where religion comes from and leads us

In seeking to make sense of modernity in the classical tradition of sociology as a field, the body of Robert…

State of the Species

Human beings live in virtual worlds that define what they value, what they aspire to, and what they are able…

The return of the grand narrative

The subtitle of Bellah’s book, From the Paleolithic to the Axial Age, indicates that it is about religions between the…

When I first received my copy of Religion in Human Evolution by post, the initial impression was of its sheer…