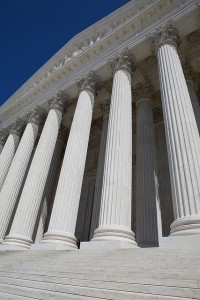 Secular law lost unanimously in the Supreme Court of the United States last week. The Americans with Disabilities Act (ADA) is a federal antidiscrimination statute that bars discrimination against employees on the basis of a disability. The ADA also contains an antiretaliation provision that prohibits employers from retaliating against employees who file charges under the statute. The statute itself does not exempt religious employers from liability. Nonetheless, the Court dismissed schoolteacher Cheryl Perich’s ADA retaliation lawsuit against Hosanna-Tabor Evangelical Lutheran Church and School on the grounds that Perich was a minister. Supporters of the decision are calling it a huge win for religious liberty; corresponding to that victory was a huge defeat for the ADA, antidiscrimination laws, employees of religious organizations, and, of course, Cheryl Perich.

Perich was an elementary school teacher at Hosanna-Tabor when she developed narcolepsy and went on disabilities leave. Although the school promised she would be able to return to her job, after Perich received a doctor’s clearance to return to work school officials asked her to voluntarily resign her position. She refused and threatened to file an ADA complaint with the Equal Employment Opportunity Commission (EEOC). Perich was then fired in direct retaliation for her threat to sue.

Perich’s case went to court only as a retaliation lawsuit; she and the EEOC did not sue for the underlying disabilities discrimination. Only late in the litigation did the church argue that it had religious reasons to fire Perich: because good Lutherans do not sue, Perich was spiritually unfit for her job. That theological position appeared to be at odds with the school’s employment manual, which expressed the Lutheran Church’s commitment to the antidiscrimination laws.

The potential religious dispute between Hosanna-Tabor and Perich over whether good Lutherans may sue set up an interesting contest between religious freedom and secular law: could religious employers keep their employees out of court if they had a religious doctrine against filing lawsuits? In my last post about this case, I phrased the legal question as whether religious institutions are allowed to disobey the law if it conflicts with their religious commitments. Does religious belief trump secular law?

Astonishingly, in dismissing Perich’s lawsuit, the Court handed an even more sweeping victory to religious employers than to give them license to fire employees solely for religious reasons. Instead, the First Amendment now gives religious employers freedom to fire their ministers for religious or non-religious reasons. According to Chief Justice John Roberts’ opinion for a unanimous Court: “The purpose of the exception is not to safeguard a church’s decision to fire a minister only when it is made for a religious reason. The exception instead ensures that the authority to select and control who will minister to the faithful—a matter ‘strictly ecclesiastical,’ [citation omitted]—is the church’s alone.” In other words, the First Amendment protects a religious employer’s absolute right to fire its ministers even when no religious controversy is involved.

The Court identified some possible situations where ministers might be able to sue, namely “actions by employees alleging breach of contract or tortious conduct by their religious employers,” but left the specific details of such cases for another day. Good lawyers are left to litigate what lawsuits remain to ministers as well as who qualifies as a minister. Unfortunately, many federal and state courts have repeatedly dismissed lawsuits by school teachers and principals, college and university professors, so presumably their claims will continue to fail now that the Court has given its imprimatur to the ministerial exception. Moreover, the concurrences by Justices Thomas, Alito, and Kagan make clear that some justices want the term minister to be broadly defined in a way that is extremely deferential to religious institutions’ authority to define their own clergy.

For now the hard question—at least for those of us who supported Perich and the EEOC—is to figure out why the decision was so sweeping and unanimous that not even one justice recognized an employee’s civil rights against a religious employer. Not even Congress, which frequently follows the political winds about religion, has so broadly exempted religious employers from the ADA’s coverage. Moreover, in the disabilities context, Congress’s actions made constitutional sense. Why give any employer the right to discriminate on the basis of disabilities? Perhaps the rare “We-Believe-God-Hates-the-Disabled Church” would pose a constitutional challenge, but why should a church that opposes disabilities discrimination be allowed to dismiss disabled ministers?

The answer from the Court is that ministers are different. History played a heavy role in the opinion as the Court reached back to Magna Carta to paint a dangerous English history of government-appointed ministers that the First Amendment was drafted to protect. The constant theme of the opinion is that “government appointment of ministers” was such a bad thing in the past that all ministers must lose the protection of the employment laws in the present.

The Court’s reasoning demonstrates the dangers of historical analogy and originalism in resolving contemporary problems. Absent from Hosanna-Tabor is any consideration of constitutional history suggesting that the First Amendment was designed to protect individuals from the powers of the churches as well as the states. Moreover, the idea that government appointment of ministers in Europe should resolve the case of a disabled elementary school teacher in Michigan lacks common, moral, and legal sense. Many of the ministerial exception cases have involved women clergy in Christian denominations in which women’s ordination was not even imaginable at the time of the nation’s founding. To conclude that their pregnancy discrimination cases should be automatically dismissed under a ministerial exception rule rooted in Magna Carta is unacceptable.

Also present in the Court’s opinion was a secondary argument about old case law holding that courts should not take sides in theological disputes. The Court falsely believes it stayed out of theological disputes; in fact it opted always to take the side of religious employers, even in non-theological disputes. This huge victory for religious freedom was freedom for the employer’s side only—and a loss for all the individuals who thought they enjoyed some First Amendment protection within their churches.

In its briefs and at the oral argument, the EEOC valiantly argued that the Court should resolve Perich’s case under the freedom of association protected by the First Amendment. The advantage to rooting the churches’ freedom in association, not religion, is that equal rights would be “enjoyed by religious and secular groups alike.” The Court vigorously rejected the EEOC’s argument as “untenable”:

It follows under the EEOC’s and Perich’s view that the First Amendment analysis should be the same, whether the association in question is the Lutheran Church, a labor union, or a social club. [citations omitted] That result is hard to square with the text of the First Amendment itself, which gives special solicitude to the rights of religious organizations. We cannot accept the remarkable view that the Religion Clauses have nothing to say about a religious organization’s freedom to select its own ministers.

Religious employees are now left to the moral obligations of their employers not to discriminate against them. But churches, like all the other institutions whose powers were limited by the Constitution, are not perfect. Secular legal systems are necessary whenever religious moral systems fail. The Framers of the Constitution understood that. The Court forgot that lesson of history when it decided Hosanna-Tabor.