Are religious institutions entitled to disobey the law? 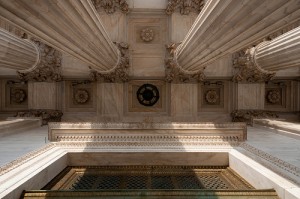 Oral argument was held at the Supreme Court on October 5 in the important First Amendment case of Hosanna-Tabor Evangelical Lutheran Church and School v. EEOC. Hosanna-Tabor involves a legal rule called the ministerial exception, a court-created doctrine that requires the dismissal of employment lawsuits against religious organizations. Religious employees never get their day in court on the grounds that the First Amendment prohibits any government intervention in employment disputes involving ministers. The churches ask the Court to defer to their determination of who qualifies as a minister. If the church identifies an employee as a minister, her case is automatically dismissed instead of being litigated on the merits.

In Hosanna-Tabor, Lutheran elementary school teacher Cheryl Perich was preparing for a new school year when she became ill at a summer church picnic. Although Hosanna-Tabor granted Perich a disabilities leave, school officials asked her to resign voluntarily after her doctor cleared her to return to teaching. Perich refused to resign and filed a disabilities discrimination claim with the Equal Employment Opportunity Commission (EEOC). Hosanna-Tabor then fired Perich in retaliation for filing the disabilities claim. Even though the school’s employment manual pledged its commitment to the antidiscrimination laws, Hosanna-Tabor argued that good Christians do not sue and that her EEOC claim disqualified Perich from being spiritually fit to teach at Hosanna-Tabor Evangelical Lutheran Church and School.

Perich then proceeded with a retaliation lawsuit against the school. The major civil rights laws, including the Americans with Disabilities Act (ADA), have antiretaliation provisions that prohibit employers from retaliating against employees who assert their protected legal rights. If the ADA applies, Perich should easily win her case; the school has already stated straightforwardly that it fired her because she filed a claim with the EEOC. That is direct evidence of retaliation. The Supreme Court must decide whether the ministerial exception blocks Perich’s claim or if she can have her day in court to prove the facts of the retaliation lawsuit.

At the oral argument, Justice Stephen Breyer shrewdly focused on the question of whether Perich was informed that good Lutheran employees may not sue:

JUSTICE BREYER: I mean, does anyone explain to her, which she might not have known, that this is a religious doctrine that you are supposed to go to the synod or whatever, and you’re not supposed to go to court? Of course they wanted to fire her because she threatened to sue them. But what I’m wondering is, is there anywhere before the motion for summary judgment where someone explains to her, our motivation here is due to our religious tenet?

Justice Breyer’s question is important because it focuses on employees’ reasonable assumptions that secular employment law should protect their rights. Supporters of the ministerial exception too easily assume that religious employees understand and accept that they abandon their legal rights at their employer’s door.

In contrast, schoolteachers like Perich, as well as the numerous teachers, principals, professors, organists, administrators, and music directors whose lawsuits for race, gender, age, disabilities, national origin, and equal pay discrimination have been dismissed under the ministerial exception, should be entitled to the protections of secular law. For that reason I filed an amicus brief on behalf of Cheryl Perich in this case.

Let me be clear. No one argues that the courts can force the Catholic Church to ordain women. That argument is a red herring. In the forty years that the ministerial exception has existed, I count only one court case of a Catholic woman who (unsuccessfully) sued to become a priest, but at least ten cases of Catholic women who knew with absolute certainty they were not priests. Yet those women were suddenly ordained ministers when they went to court to enforce their employment contracts against Catholic employers.

In Weishuhn v. Catholic Diocese of Lansing, for example, a case with a cert. petition currently pending before the Court, a Catholic elementary school teacher reported possible sexual abuse of a student’s friend to state authorities as required by Michigan law. Weishuhn was fired for not informing the school principal of her actions. In another case, a Catholic school principal was fired after complaining to the bishop that her priest-supervisor assaulted and battered her. The church successfully asserted that those teachers—who could never be ordained priests—were ministers whose claims could not be reviewed by secular courts. Cases of race and age discrimination, sexual harassment and hostile work environment, and disabilities discrimination and retaliation have met a similar fate. In such cases the ministerial exception protects discrimination instead of religious freedom.

The all-male Catholic priesthood can be protected easily by First Amendment freedom of association and/or a bona fide occupational qualification [BFOQ] in employment law. The Catholic Church teaches that women cannot represent the male person of Jesus Christ. That teaching seems easily to qualify for the expressive association protected by the First Amendment. It also offers a really strong argument for a BFOQ where gender is allowed to be a requirement for the job.

Creating the broad ministerial exception to deal with the issue of an all-male priesthood is like swatting a fly with a sledgehammer. It also distracts attention from the legal protection of women clergy in churches that do ordain women. In the very first ministerial exception case, a female Salvation Army minister sued for equal pay. In later cases, Baptist and Methodist ministers and Jewish rabbis have sued for pregnancy and disabilities discrimination. Male and female ministers have sued for sexual harassment, hostile work environment, and race and age discrimination.

The ministerial exception handles those cases with ease. It says simply: courts may not review employment cases involving ministers.

The ministerial exception asserts that clergy should fall completely outside the protection of the employment laws. Why? Why should women clergy be barred from bringing pregnancy discrimination suits? Or male and female clergy be prohibited from suing for disabilities discrimination and retaliation? In worrying about threats to an all-male priesthood the ministerial exception neglects to protect clergy who suffer unlawful treatment. It is troubling to think the First Amendment could be interpreted to rob clergy of the protections of secular law enjoyed by their fellow citizens.

The Court’s controversial decision in Employment Division v. Smith held that religious individuals must obey neutral and generally applicable laws. Now we wait to see if the Court will hold religious institutions to the same standard when it issues its opinion in Hosanna-Tabor.