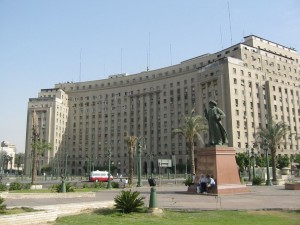 Since the resignation of former president Hosni Mubarak in 2011, Egypt has experienced significant turmoil, from temporary rule by the Supreme Council of the Armed Forces to the military coup that led to the election of current president Abdel Fattah el-Sisi. Mounting chaos in the region —including unrest in Egypt and fighting in Gaza-Israel, Iraq, Libya, and Syria—has forced Egypt to the forefront of the conflict with the Islamic State in Iraq and Syria (ISIS), as US Secretary of State John Kerry emphasized during a recent visit to Cairo. As a report in Al-Monitor attempts to explain, the “Islamic Caliphate” model touted by ISIS poses problems for Sisi’s plans for a hypernationalist, secular state. As he attempts to consolidate power at home, President Sisi also finds himself playing a key role as mediator of the resurgent conflict between Israel and Hamas in Gaza. A Foreign Policy analysis described the “Sisi Doctrine” as “based on repression and stability,” an “outgrowth of [Egypt’s] own domestic concerns about Islamism, militancy, terrorism, and instability.”

In the recent series on “The future of Egyptian democracy,” contributors to The Immanent Frame have tackled the various complexities of this situation. Many of our authors argued against the simplistic framing of Egyptian political forces as “Islamist vs. secularist.” Others highlighted the role of divine intervention and religious legitimacy in Egyptian politics, analyzed and critiqued democracy as a form of government, and reported on disturbing events in the aftermath of Sisi’s election, including the rise of the “deep state” and attempts to control mosques and pulpits. As part of a joint project with Religion Dispatches, contributing editor Austin Dacey has raised additional issues, including the exact role of secularism in the ongoing unrest and the Egyptian government’s crackdown on nongovernmental organizations.