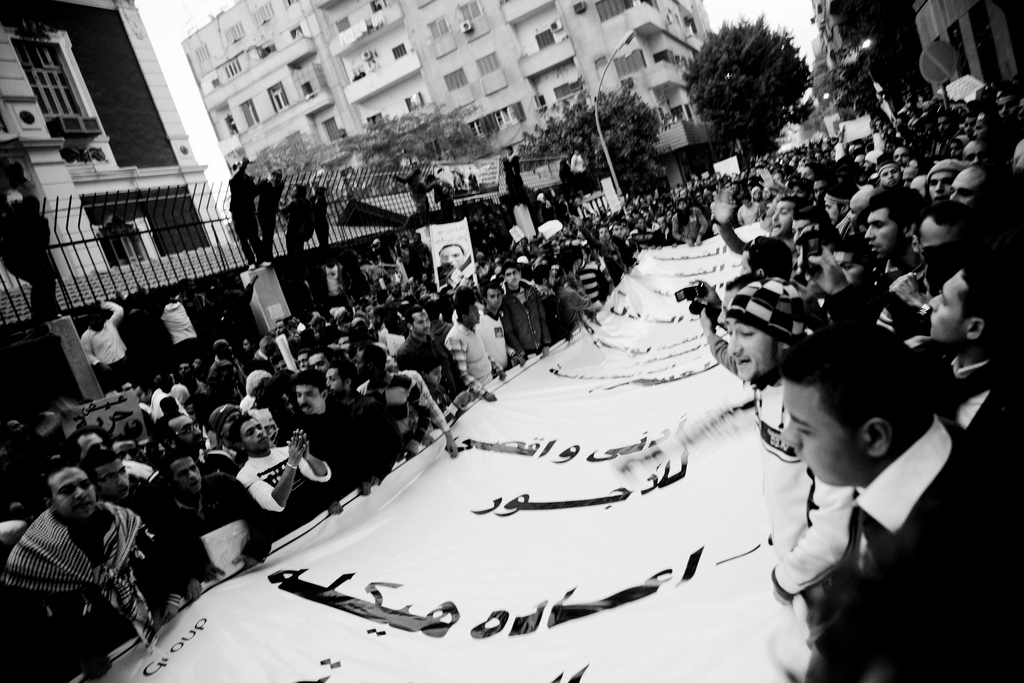 Carl Becker was right in his assessment of great events: they have an ability to create a new normal language of profound significance. Each era has few words that epitomize its worldview. The Arab Spring has been a momentous event of profound significance, but the systematic hampering of ideas into pre-packaged catalogs of binary grouping, as reflected in Mohamad Elmasry’s comment on my reflection on Egypt, has been a major obstacle in revealing the creative ideas of this unique event. This response is to transcend the binary framework in both Dr. Elmasry’s readings of Egypt and the wider discourse regarding the Arab Spring.

My reflection concerns ideas, not groups. Elmasry’s version of the story is the opposite. This is the dividing line between our two viewpoints. Both could be right in their incommensurable paths. As such, there is a conceptual trap in responding to his binary framing of the story. Since his version is a litany of claims for and against the Muslim Brotherhood, a response to them will by default put me in the opposite camp, which I abstain to join.

Egypt has a vibrant culture with a total population of 94 million people. The country has a lively intellectual life, which includes various daily newspapers and periodical journals and magazines (59 in Arabic, nine in English and two in French, according to the State Information Service) in addition to a sizable and historically well-established bureaucracy and civil society. For Elmasry to lump all opposing views into “Egypt’s political liberals,” “Egyptian liberals’ criticisms” and “anti-Brotherhood political forces,” is intellectually disingenuous. My response, therefore, will be to re-position the context of the original reflection in terms of looking at the limits of legitimacy and the extent of trust, highlighting the pitfalls of simplifying a complex and rich debate.

Dr. Elmasry has reduced the historiographical analysis of legitimacy to the following conclusions. He writes that I suggest “that former Egyptian president Morsi claimed legitimacy on religious grounds rather than democratic grounds.”  This is factually incorrect and there is no record of it in my essay. I have, in fact, described Morsi as a ballotcrate, accused of “reducing democracy to a notion of legitimacy that relies on electoral procedures,” which, to his opponents, was at the expense of political pluralism. However, I have written elsewhere about Morsi’s sense on religious legitimacy based on his political rhetoric and the author is welcome to comment on that content and context.

Equally incorrect is the claim associated with the reflection that “Islamists could not be trusted to respect Egypt’s democratic process.” There is no evidence of this claim in the reflection. My argument for the absence of trust among the competing Egyptian parties is based on recounted tales on the ground. The veracity of these claims as factual or measurable on their own is its own story. But their objective reality weighs squarely on the breadth of public trust. There is a large segment of ordinary people who do not trust Islamists based on their perception and observation of political turmoil in countries governed by Islamists such as the Sudan or regimes defied by strong Islamic oppositions as are the cases in Pakistan, Somalia and Yemen.

Finally, I would like to draw attention to three problematic statements in Elmasry’s conclusions because their methodological fallacies warrant some alterations.

The writer notes that “The political order created and codified in the 2012 constitution, while flawed, would not have allowed for a dictatorship, much less an Islamist dictatorship, to emerge.” This statement cannot be substantiated. Strong constitutions do not guarantee sustained democracies, nor do they shield societies from tyrannical onslaught. Modern governments of the Arab world and in many sub-Saharan African countries have generally espoused consultative constitutions in terms of civil liberties and human rights. But lived political freedom has remained dangerously low because of lack of constitutionalism or constitutional durability.

Elmasry’s statement that “the idea that the Muslim Brotherhood would never have yielded power is widespread among Egypt’s anti-Brotherhood political forces” does actually support my argument on the prevailing lack of trust among Egypt’s competing legitimacies. And it seems to me that for a newly adopted democratic experience to develop, the margin of political trust has to be evidently large in the absence of a manifested electoral mandate. It does not matter whether this trust is reality or imaginary. The mere existence of fear does intrude upon the preponderance of political trust.

In addition, Elmasry writes that, “Lo also intimates that Egypt’s 2012 constitution was not ‘agreed upon.’ It is difficult to understand this complaint given that this document was approved by 64% of voters, and also given the unwillingness of Egyptian liberal parties to participate in the constitution-building process.”

There are two problems with this. First, my concern is about the absence of an ‘agreed-upon’ document, not about the wedge politics that amounted to that unfortunate reality. My second concern in saying that Morsi’s opponents boycotted “the constitution-building process” as re-iterated by the author is truth and has contributed to cementing the problem. The citing of 64% of voters’ approval also supports the absence of agreed-upon argument. The number is valid, but it was 64% of a 33% voter turnout, which is unsatisfactorily low.

I should re-iterate my prevailing view about Islamists and democracies in the Arab Spring. Supporting Islamist parties not only is a valid ideological conviction for many, but could also be a convincing theoretical argument for a sustained, inclusive democracy for others. If democracy needs good governance, and good governance is conditional to an active civil society, as Alexis De Tocqueville told us, then we should not systematically exclude Islamists in the democratic process. They have proven through surveys and poll results to be resilient players in mainstream society. Therefore, no inclusive, active civil society can be sustained in their absence.

However, one should not let repeated disappointment or devotional allegiance lead to endorsing invalid conceptual frameworks to simplify the complexities of the process. Reducing the existing political intricacies into two feuding camps of Islamists and liberals is an unconscious reinforcement of the exceptionalism paradigm. The binary conception of Islamists vs. liberals does not fully and accurately capture the rich, diverse, and lived politics on the ground, which is the goal of my reflection.

Could a god-fearing Egyptian vote for Morsi without being an Islamist? Can a Nubian farmer in Aswan choose to vote for Hamdeen Sabahi without being labeled a liberal? Can a single mother of seven children living in Nasr City support Abdel Fattah el-Sisi out of her worry after witnessing the Syrian tragedy unfold?

Intellectual reductionism thrives within the uncivil discourse engulfing the Arab Spring. I have written previously that, like its politics, the discourse of the Arab Spring has been polemical about people and groups, and certainly has not always weighed ideas and their merits. Emad Abdullatif, a Language and Rhetoric professor at Cairo University, has critically lamented this intellectual deficiency in his 2012 Arabic book, The Eloquence of Freedom. His argument is that the Egyptian streets were wiser and more rational in articulating the problem than the intellectual, political elites. The eloquence is in polities formulated in the streets but expunged by the intellectual elites in their politics. This reductionism is what hampers development of reformist ideas and concepts at the grandiose level of the Arab uprising era. We must push for a much-needed plurality in ideas and imaginations. We must look beyond discursive duality into plurality in Egypt and beyond.

Mbaye Bashir Lo is Assistant Professor of the Practice of Asian & Middle Eastern Studies at Duke University. Dr. Lo’s research interests include the sociology of Islam, Arabic language and literature in Africa, and theories of civil society. He has served for six years as faculty director for the DukeEngage Egypt, a student civicengagement program in Cairo. He is also the co-director of Duke-In -heArab World academic program. His books include Muslims in America: race, politics and community building, civil society-based governance in Africa: theories and practices, and Understanding Muslim Discourse: language, tradition and the message of Bin Laden. He has recently published an article in the Journal of Religion and Popular Culture, “Challenging Authority in Cyberspace: Evaluating al Jazeera Arabic Writers.”