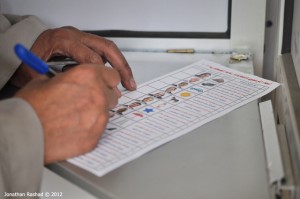 The ouster of Mohamed Morsi involved a dispute over legitimacy—what gave the Egyptian president the right to remain in power? Despite the arguments of some commentators to the contrary, Morsi’s claim to legitimacy was based in democratic norms, not religious ones.

An earlier article, “Egypt and the elusiveness of shar’iyyah,” published at The Immanent Frame, contains several problematic assumptions, which lead the author, Mbaye Lo, to a series of equally problematic conclusions. Lo suggests that former Egyptian president Morsi claimed legitimacy on religious grounds rather than democratic grounds and that Islamists could not be trusted to respect Egypt’s democratic process. Lo also seems to uncritically accept claims made about the Muslim Brotherhood by some of Egypt’s political liberals.

Lo suggests that Morsi’s claim to legitimacy was based in religious norms, not democratic norms. He argues that Morsi grounded his legitimacy in a combination of Islamic leadership and Islamic law, and that it was through this Islamic lens that his supporters saw him. Although this narrow understanding of legitimacy may characterize how some of Morsi’s hardline supporters viewed him, there is no evidence that this is a dominant understanding within Egypt’s anti-coup movement.

For Morsi supporters, and, indeed, for Morsi himself, discussions of legitimacy have focused mostly on electoral legitimacy and the fact that Morsi was a democratically elected president. In the lead-up to Egypt’s July 3, 2013 military coup, Morsi repeatedly emphasized the fact that he was “the elected president,” and it was in that context that Morsi talked about his legitimacy. Since the coup, the Muslim Brotherhood and others in Egypt’s anti-coup alliance have continued to emphasize the theme of electoral legitimacy.

Morsi and the Brotherhood have not been the only ones in Egypt to use the word “legitimacy” in this way. In fact, the Morsi/Brotherhood discourse on legitimacy can be seen as a response to 2012-2013 claims by anti-Brotherhood political forces that Morsi had “lost his political legitimacy.” The “lost legitimacy” discourse in Egypt took root only four months into Morsi’s term, in November 2012. It was propagated by the National Salvation Front and other anti-Brotherhood groups, and continued right up until the July 3, 2013 military coup. Both Morsi supporters and detractors spoke of legitimacy then, but the primary meaning among both camps was tied to democracy and secular politics, not Islamic law or some abstract notion of an Islamic emirate.

Lo also suggests that Islamists could not be trusted to respect the democratic process in Egypt. This is a problematic conclusion, both because there is little evidence to support it and because pro-coup Egyptian politicians have used this line of reasoning to justify last summer’s coup. This claim is also extremely ironic, given that it was the Brotherhood that adhered to the rules of democracy, while the mainstream of the secular and Leftist opposition jettisoned those rules by not accepting electoral results and by allying with the military to formally subvert the democratic process.

The idea that the Muslim Brotherhood would never have yielded power is widespread among Egypt’s anti-Brotherhood political forces, and the author seems to have internalized this belief. Lo speaks of the deep distrust of Islamists, and also questions the basis upon which trust may have been established in Egypt. Lo writes, “In societies like Egypt, going through transition with no recorded democratic experience or independent judicial system, what is the basis of this trust? How can competing parties believe that opponents will respect the limits of their temporary custodial powers and will return to the people to renew their trust when election time comes?”

Lo seems to be unaware of the rules of the political game put in place after the January 2011 uprising against Hosni Mubarak. The political order created and codified in the 2012 constitution, while flawed, would not have allowed for a dictatorship, much less an Islamist dictatorship, to emerge. The constitution greatly reduced presidential powers, most notably with respect to emergency law. It also created a prime minister as powerful as the president; stipulated a strong and independent parliament; allowed all Egyptians to form political parties and compete in elections; decreed strict term limits for elected officials; and provided all Egyptians the right to own newspapers without government permission. Importantly, the Brotherhood and other Islamists supported these checks and balances inside the constituent assembly.

There is no evidence that the Muslim Brothers were planning to subvert democracy at some point in the future. In any case, all that can be expected in the first year or two of a democracy is that democratic ground rules are established. Had the Brotherhood somehow held onto power after losing elections years down the line, or engaged in vote rigging in some future election, or sought to eliminate Egypt’s secular and liberal parties, or shown some serious inclination to do any of these things, then this alleged lack of trust would have been justified.

Lo also intimates that Egypt’s 2012 constitution was not “agreed upon.” It is difficult to understand this complaint given that this document was approved by 64% of voters, and also given the unwillingness of Egyptian liberal parties to participate in the constitution-building process even after agreeing to the precise composition of the constituent assembly. In a December 2012 event at the American University in Cairo, liberal constituent assembly member Mohamed Mohie El-Din argued that liberals bear the responsibility for problematic constitutional articles. Mohie El-Din located the problem in liberals’ unwillingness to participate fully in the constitution-building process, even before they withdrew officially. Mohie El-Din claimed that nearly all of the liberal members of the assembly regularly failed to show up for assembly sessions, thus subverting the democratization process that was in place and agreed upon by most Egyptians.

In one particularly telling sentence, Lo seems to uncritically accept many of Egyptian liberals’ criticisms of the Muslim Brotherhood. He writes, “There appears to be a focus on their earlier condemnation of the revolution, their secret negotiations with intelligence chief Omar Suleiman while the revolution was ongoing, their rejection of a new constitution before elections, their depiction of Egypt’s notorious police force as brothers in the revolution, and their characterization of revolutionary leaders as agents of foreign interests.”

In this sentence, Lo appears to uncritically accept claims made by Egypt’s anti-Brotherhood political forces, and does nothing to challenge them. Although the Brotherhood is guilty of compromising too much with Egypt’s deep state in the aftermath of the January 2011 uprising, most of the claims in Lo’s sentence are deeply problematic and distorting.

For instance, 50 revolutionary figures, including only two Muslim Brotherhood members and many more liberals, met with Omar Suleiman during the 18-day uprising against Mubarak. The meeting was not secret; it was reported in the global media. On February 6, 2011, The New York Times reported that the meeting was attended by “a group of about 50 prominent Egyptians and opposition figures, including officials of the small, recognized opposition parties, as well as a handful of young people who helped start the protest movement.” Kirkpatrick and Sanger wrote that only “two representatives of the Muslim Brotherhood” attended the meeting. There is no evidence that the Brotherhood participated in an attempt to subvert the revolution, as has often been suggested by some in Egypt’s liberal camp. In any case, the uprising continued for several more days and the Brotherhood never retreated from the revolutionary demand that Mubarak step down.

Lo also writes, “Egyptian feminist activist Nawal El Saadawi observed a turning point in the itinerary of the revolution after the military and Islamist blocs decided to hold elections before drawing up a new Constitution, contrary to the request of the revolutionary protesters at Tahrir.”

Here, the author implies that the only legitimate “revolutionary protesters” were the liberals who were opposed to holding elections before the writing of a constitution. The Islamists were also “revolutionary,” however. There were legitimate debates and perspectives about whether to hold parliamentary elections before the writing of a new constitution. The Islamists, including the Brotherhood, feared that the military would dominate the constitution-building process in the absence of an elected body to oversee the process, and thus favored elections first. The liberal perspective was also fair—they didn’t want a single group to dominate the constitution. In any case, a vote was held in March 2011 in the midst of widespread debate and polarization. A total of 77% of Egyptians sided with the Brotherhood perspective that elections should come first. Unless the “revolutionary protesters at Tahrir” represented very few people in Egypt, it is difficult to understand El Saadawi’s claim, which Lo uncritically accepts.

Lo also suggests that many of Egypt’s Islamist forces opposed the Brotherhood and supported the June 30 protest movement against Morsi. “If the opposition to Morsi’s government were solely from the military and the liberal elites, then the argument of collusion against democratic legitimacy might be valid. But the fact that all other Islamist blocs—from al-Azhar to the Salafis—and most revolutionary leaders agreed to delegitimize his government makes this discussion pertinent.”

Lo’s conclusion here is misleading. First, Al-Azhar leadership has historically been seen as part and parcel of Egypt’s deep state. Al-Azhar’s Fatwa Committee famously forbade protests against the Mubarak regime during the heart of the 2011 uprising. Second, the Nour Party was the only significant Salafist group to support the June 30, 2013 movement against Morsi, and they have lost popularity among Islamists as a result. All other Salafist parties, of which there were several, did not support June 30, and, in fact, are currently part of the anti-coup alliance. The fact is that almost all Islamist parties in Egypt were opposed to June 30, thus making Lo’s intimation deeply problematic.

The Brotherhood deserves serious scrutiny for critical mistakes made during Egypt’s turbulent post-Mubarak political transition. They do not, however, deserve to be held accountable for myths propagated by Egypt’s anti-Brotherhood opposition.

Mohamad Elmasry is a Visiting Scholar at the University of Denver’s Center for Middle East Studies, and an incoming Assistant Professor in the Department of Communications at the University of North Alabama. In 2009, Dr. Elmasry received his PhD in Mass Communication from the University of Iowa, where he was a Presidential Fellow. His PhD dissertation examined constraints on news production in Egypt. Dr. Elmasry held an assistant professorship at Qatar University from 2009 – 2011, and at the American University in Cairo from 2011 – 2014. His research has appeared in reputable refereed publications and focuses on the sociology of news, Arab press systems, and news coverage of the Israel-Palestine conflict. Dr. Elmasry is also a political and media analyst and has appeared regularly on international television news networks, including CNN, The BBC, and Al-Jazeera English.