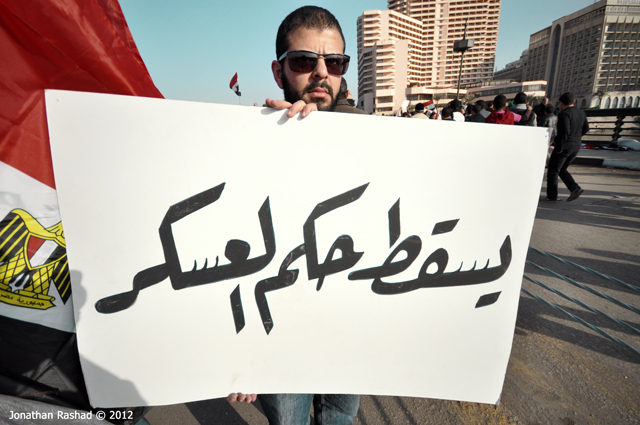 Field Marshal Abdel Fattah el-Sisi is the new Nasser, according to many Egyptians. The image of the military strong man currently leading Egypt is frequently put beside the picture of Gamal Abdel Nasser, who led a group of younger military officers in taking control of Egypt in 1952. The new government presents itself as saving Egypt from the religious fanaticism of the Muslim Brotherhood, just as Nasser liberated Egypt from imperialists and conservative forces. Since many secularists and self-identified liberals supported Sisi’s takeover of the government in July 2013, the subsequent political conflicts can appear to be a continuation of the battles between advocates of a secular modern polity and religious fundamentalists. However, viewing the current turmoil as being basically a conflict between religious and secular forces in the public arena can lead to conclusions that make real conflict resolutions more difficult. “Secular” versus “religious” is not the major battle. The goals of the protesters have been more basic: to gain control over their lives through improved economic opportunity and freedom from the surveillance and control of a dominating police state, whether that state is secular or religious.

The comparison of Sisi with Nasser raises questions that go beyond the immediate issues of the suppression of a politically active religious organization. Both Nasser and Sisi came to power as the result of military intervention in politics. The similarity raises the question of what the political role of the military should be. This issue was debated in the 1950s and 1960s and is being raised again in discussions of Egyptian politics. Writing from prison, Ahmed Maher, one of the leaders in the original Tahrir protests, argues that the current regime “has confirmed citizens’ fears of a military dictatorship.” Opposition to military rule is one theme in the current political conflicts.

A more general opposition to authoritarian rule, whether military or not, is a second important theme in populist Egyptian political activism. This provided much of the dynamism for the initial movement of protest, the Tahrir movement, which forced Hosni Mubarak from power in 2011. A third theme has been opposition to religious fanaticism and the possibility of theocratic rule. This theme became an important part of the conceptual repertoire of the second round of popular protests, which opposed the government created by the victory of the Muslim Brotherhood’s political party and presidential candidate, Mohamed Morsi, in the elections following the overthrow of Mubarak.

While there are religious dimensions in the protest repertoires of the three rounds of opposition—against authoritarian rule, against possible theocracy, and now against direct military rule—none of them is clearly definable as a clash between secular and religious forces in the public political arena. The common elements in these three movements of populist protest are opposition to an intrusive state, whether religious or secular, and demands for greater freedom in lifestyle and improved economic opportunities. In many ways, the protests are generational, with the younger generations expressing their frustration with the conditions created by decades of authoritarian rule.

The popular opposition to the Mubarak regime that was manifested in the Tahrir Square protests of 2011 was anti-authoritarian in the broad sense. It arose out of profound discontent with economic conditions and police state oppression. The April 6 Movement, which was an important participant in Tahrir, was initially a Facebook-based group supporting a strike in a major industrial center in 2008. Another Facebook page, “We are all Khaled Said” (Kullena Khaled Said), mobilized participation in the Tahrir protests. Its message was a reference to the outrage over the death of Khaled Said, a young computer programmer, who was beaten to death by police outside an Internet café.

By the twenty-first century, Mubarak’s regime was not a simple military dictatorship. He created a power elite that relied more on security police than on the military for domestic control. This elite dominated the economy and created highly visible economic inequalities. It was this authoritarian regime that was the target of the protests.

Religion played little direct role in the Tahrir protests. The organizers of various aspects of the demonstrations were neither secular in viewpoint nor were they advocates of particular religious programs. The founder of “We are all Khaled Said,” Wael Ghonim, had previously created a website, IslamWay.com, which was an effort to provide Muslims with a broad spectrum of moderate Muslim views on a wide range of subjects. Some, like Ahmed Maher, who was a co-founder of the April 6 Movement, supported Morsi, the Muslim Brotherhood candidate in the post-Tahrir elections, rather than vote for someone who had connections with the old regime.

Religious issues were clearly involved in the second round of protests, as the Morsi government moved rapidly ahead with its own political program rather than working with other major political forces. Soon the political opposition began to speak about the dangers of an emerging theocracy. This challenge coalesced around the demand for the political party of the Muslim Brotherhood to relinquish power and for the elected president to leave office. A giant petition campaign organized by a group called Tamarod led to a major public demonstration on June 30, 2013. This popular protest was followed by the political intervention of the military, removing Morsi from his office and subsequently outlawing the Brotherhood itself. These actions may have used fear of theocracy as a slogan, but the real target of the protests was the Muslim Brotherhood, not Islamists in general. Radical Egyptian Islamists, as represented by the Nour Party, in fact joined in the opposition to the Brotherhood and then became part of the coalition of groups supporting the military takeover of the government. The overthrow of President Morsi was not a victory of secularism over Islamism; it was a victory of a heterogeneous coalition of anti-Brotherhood groups ranging from the military and old elite capitalists to secularist intellectuals and Islamists. The broad popular support for this second round of protests continued to be based on the non-ideological visions of the Tahrir movement: freedom from an intrusive authoritarian regime and better opportunities for a good life.

In the public political arena now controlled by the military, a major polarization exists. The Tamarod group has split between those who have been jailed for criticizing the military’s suppression of opposition voices (whether Islamist or secularist) and those who support the consolidation of the authoritarian military regime as the only alternative to a Brotherhood-led theocracy. Similar divisions have emerged among other major interest groups as well.

In the current political situation, disagreements (and conflicts) between secularists and Islamists have little impact on actual political developments. The old debates over secularism seem like archaic remnants of past struggles. The real battles regarding religion and politics—both in the debates framing the wording in the various constitutions that have been recently written, and on the streets—are over the control of religious institutions and loyalties.

The efforts by the Brotherhood government to frame politics in the format of their particular version of Islamism could be identified by their opponents as the effort to create an Egyptian theocracy. While the military regime opposed this “theocracy,” the alternative that it has been creating is not a “secular” regime. Older established Islamic institutions in Egypt have often viewed the Brotherhood as a rival religious authority, and they provide support for the new military government. The military leaders mobilized prominent Islamic scholars like the former Grand Mufti Ali Gomaa to issue fatwas and statements supporting the use of deadly force against Brotherhood protesters. The military itself declared the Brotherhood to be a terrorist organization, and has assumed at least indirect control over religious institutions in Egypt. The Ministry of Religious Endowments, for example, has imposed “unified sermons” on mosques throughout the country, with punishments for imams who depart from the set sermons.

The Tahrir revolution opposed the old-style authoritarianism of Mubarak, and the June 30, 2013 movement opposed the possibility of an Egyptian theocracy. The current opposition faces a new style of military caesaropapism. In these conflicts, secularism plays a remarkably small role in shaping the attitudes and programs of the actors. The supporters of the Brotherhood and the new military regime are fighting out an important battle between religion-controlled state and state-controlled religion. Islamists and secularists are on both sides in this conflict.

This visible battle is between longstanding power interests in Egyptian politics and society. Organized Islamism in the form of the Muslim Brotherhood has been in conflict with authoritarian military regimes in Egypt for more than half a century. While relations between religion and state are central to this struggle, the clash is not basically about secularism. However, in the context of the Arab Spring and the subsequent protests, this old struggle itself seems disconnected from the populist themes of the recent movements protesting against police state repression and lack of opportunity for a good life. The old combatants appear to have imposed their causes and terminologies on the newer populist revolutionary enthusiasms.

Egyptians and analysts who view the current political tensions in Egypt as being primarily a struggle between Islamists and secularists create obstacles to conflict resolution. The populist activism that was manifested in 2010-2011, in the Tahrir movement, is opposed to authoritarian rule—whether theocratic, caesaropapist or secular. As long as the situation is presented as a choice between theocratic and military rule, the younger generation will not find either alternative satisfactory. This important part of Egyptian society will continue to find ways of resisting efforts at authoritarian control of lifestyles. The fundamental problems of economic inequality and elite domination were identified by the demonstrators in Tahrir. Islamists can be suppressed and military regimes overthrown, but until these basic problems are resolved, opposition like that expressed in Tahrir will continue.

John O. Voll is Professor of Islamic History and past Associate Director of the Prince Alwaleed bin Talal Center for Muslim-Christian Understanding at Georgetown University. He is a past president of the Middle East Studies Association and serves on numerous editorial boards, including the Oxford Islamic Studies Online. He is the author, co-author, or editor of a dozen books, including Islam & Democracy (with John Esposito), and more than one hundred articles on Islamic and world history.