Egypt after the coup 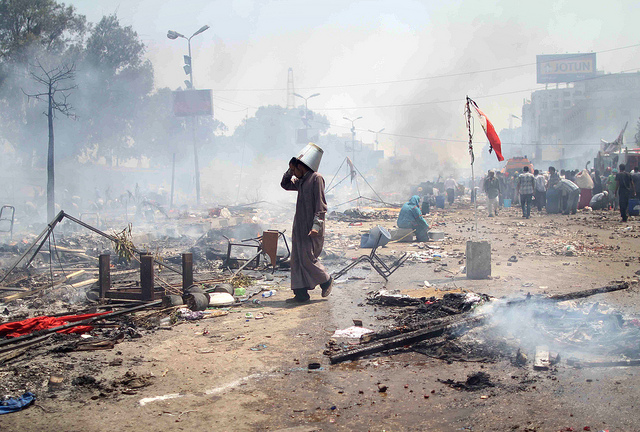 On July 3, 2013, after four days of intense public protests, Egyptian President Mohamed Morsi was removed, by force, from elected office. A violent backlash against Morsi’s party, the Muslim Brotherhood, quickly followed his ouster. Hundreds of protesters—perhaps thousands—were killed when Egyptian security forces raided a pro-Morsi sit-in at Rabaa al-Adawiya Mosque. Several news outlets sympathetic to the Brotherhood have been shuttered and journalists have been detained. Morsi himself is on trial on various charges filed after the coup, and has been kept in a soundproof cage during recent proceedings.

The backlash against Morsi and the Brotherhood reflects deep tensions in Egyptian society over the place of religion in politics and public life. Though the turmoil in the streets has subsided over the last eight months, debate has raged around Egypt’s new constitution, which was approved in a referendum in January 2014. Critics of the constitution focused, in particular, on a provision that bans parties formed “on a religious basis,” which could have consequences for opposition voices on both ends of the spectrum. As Marwa Yaha reports, though Islam remains the state religion, scholars of Egypt predict that Islamic parties will be banned, forcing them to move underground and narrow their focus to a “virtually singular goal: resistance to the military-backed government.”

Meanwhile, the government is expanding its crackdown to an “ever-widening list of enemies,” including Islamic charities, all the while blaming the Brotherhood for the unrest. Some commentators, notably Ashraf El-Sherif and Ed Husain, have argued that the Brotherhood must adapt if it hopes to reenter Egyptian politics, primarily by distancing itself from ultraconservative Islamic sects and moving to the center.

In addition, several observers have examined the “problem of religion” in Egypt. At openDemocracy, Egyptian scholar Amr Osman predicts that the fundamentally conservative scholars in Egypt’s “religious establishment” will draw closer to the military government, providing religious justifications for violence and repression. In her interview with scholar Saiyad Ahmad, Johana Bhuiyan details the use of fatwas for this purpose: 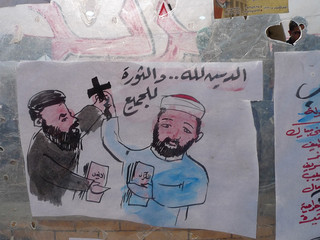 S.A.: Absolutely. How could they not? I think that people, both Muslim and non-Muslim, invariably commit an unintentional error when discussing and studying Islam and Muslims, and that is that even with the advent of modern times the vast majority of Muslims who do not live in the West simply do not separate politics and religion. They do not consider religion to be one compartment and politics to be another. For them, religion is politics, and politics is religion.”

Meanwhile, at Religion Dispatches, Asma Afsaruddin writes that all sides in the Egyptian conflict are guilty of exploiting religious rhetoric to advance their goals:

“The cynical use of religion to justify calculated political strategies is in fact disturbingly evident on both sides. Al-Sisi and his allies have declared Morsi’s supporters to be “terrorists” guilty of inciting violence against the government, drawing a ready equation between Islamism and terrorism.…

Certain members of the Muslim Brotherhood on the other hand claim to be carrying out a “jihad” against the military government and have been willing to register their moral outrage by risking death at the hands of the army.

Well-established Islamic political thought and history would prove both sides to be abusing Islamic legal terminology. From the viewpoint of classical scholarship, Muslims do not wage jihad against one another; the military form of it was reserved for external aggressors only.”

The crisis in Egypt has also proved thorny for U.S. policymakers, many of whom express disappointment in the apparent “failure” of the democratic experiment there. However, writes Dr. Kent Davis-Packard, Americans and Egyptians disagree on a fundamental level about the meaning and importance of democracy:

“What has democracy done?” lamented a cab driver, who said he would prefer Egypt to go back to the days of ousted President Hosni Mubarak. “People have died. We have more violence and no security.” For Egyptians like him, democracy was the process by which a government—the Muslim Brotherhood—was elected, failed and then was removed from power by a dramatic street uprising with the help of the military. They heard the West’s encouragement to turn back to the ballot box. But from the people’s perspective, the ballot box did not bring “bread, freedom and social justice”—their demands at Tahrir Square. Instead, it brought constant conflict, uncertainty and no relief from increasingly dire security and economic problems. Like two ships passing in the night, western leaders continue to call for democratic transition in Egypt—while Egyptians increasingly wonder whether democracy can really get them what they want.”

The 2013 coup has also prompted reflection on both the fruits and challenges of the 2011 “Arab Spring.” At the Washington Post, Max Fisher questions the objectives of a new documentary about the uprising. Khaled Famy asks what has really changed in Egypt since 2011. For the French magazine OrientXII, Peter Harling and Yasser el-Shimy reflect on “Egypt’s Quest for Itself.” Finally, on his blog, journalist Patrick Galey looks back on the events he covered last year, asserting that “2013 was the year the revolution died.”