“Democracy is perhaps the most promiscuous word in the world of public affairs. It is everybody’s mistress.” —Bernard Crick 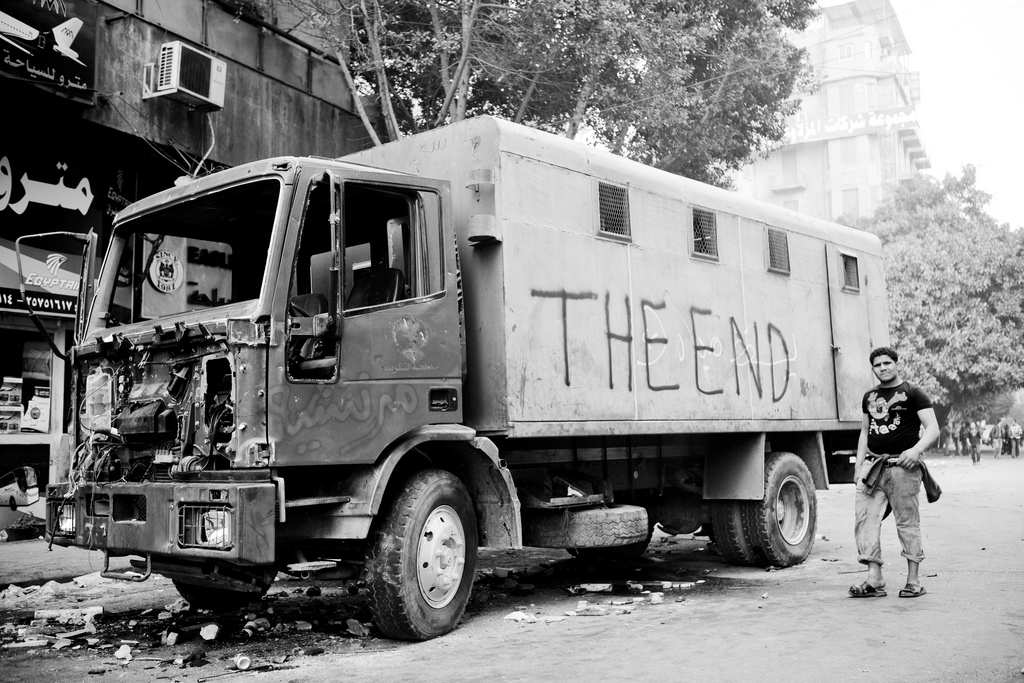 Since the removal of Mohamed Morsi, Egypt’s first democratically elected leader, much of the discourse on the interim government’s handling of the transition of authority has centered on the damage done to democracy. However, what is happening in Egypt today is far deeper and more dangerous than a democratic transition gone awry. Egypt is redefining authoritarianism by both institutionalizing the “deep state” and crystallizing military rule. The result is an entirely new phenomenon that deserves serious attention and demands a new way of thinking. This process has three important elements: the closing of political space, the elimination of public dissent, and the removal of the trappings of democracy.

The closing of political space

Egyptians saw the 2011 revolution as marking the end of the Mubarak tradition of limited political contestation and participation, through the introduction of new and alternative political voices. Those changes brought about institutional changes such as the new Law on Political Parties, and also forced traditional parties, both religious and secular, to articulate specific alternative political platforms so as not to appear redundant. On March 28, 2011, the Supreme Council of the Armed Forces revealed the new Law on Political Parties. This new law requires parties applying for registration to gather 5000 signatures from only 10 of Egypt’s 29 provinces, with the guarantee that their case will be reviewed within 30 days. This new law is being lauded as lifting the political limbo in which most parties had found themselves. Immediately, dozens of parties submitted applications for official recognition.

It appeared that for the first time since President Gamal Abdel Nasser’s overthrow of the Egyptian monarchy in 1952, the secular parties of Egypt were emerging as alternative voices in the Egyptian political landscape. At the time, Egyptian leftist and secular forces were gearing up for a new era of political contestation. Pluralism also extended to Islamists, where the Brotherhood seemed to no longer have a monopoly on Islam. On February 19, 2011, eight days after Mubarak’s ouster, the first party to gain recognition by the courts in post-revolution Egypt was the previously illegal Wasat Party (The Center Party). Founded by Abul Ela Madi and several other former members of the Muslim Brotherhood, along with Coptic leaders and women, the Center Party’s political vision for Egypt is inspired by conservatism but not articulated through Islamism.

The political landscape immediately after the revolution seemed be well on its way to political pluralism, but the current constitution has institutionalized the return to single-party authoritarian rule. The constitution’s Article 74 prohibits political parties formed “on a religious basis,” a clause that has been used to ban the Muslim Brotherhood’s Freedom and Justice Party. The constitution will also weaken and marginalize leftist and secular groups that the deep state sees as threatening to the current political status quo, by charging them with espionage and defamation of the state. This was the tactic that was unfurled with the April 6 movement and the liberal constitution party—undercutting any chance for real political contestation and political pluralism in the future.

Authoritarian political regimes are characterized by the small size of the group in power relative to the population; the exclusion of political party formation further limits the number of powerful actors. James Madison’s classic argument in Federalist No. 10 recognizes that if one wants to remove political parties, the first step is to destroy the liberty essential to their existence. He went on to say that this was not a feasible option for a republican polity. That lesson has been lost on Egypt’s new leaders. The mass arrest of political activists across the ideological spectrum is facilitating the crystallization of authoritarian rule. Furthermore, parliamentary elections, which are supposed to take place this summer, have not been announced, and the requirements for candidacy have also not been released. Under the threat of violence, parties have not been able to organize or develop political platforms, eliminating even the semblance of political contestation that characterized the Mubarak period. Under this emerging authoritarian political order, the formal trappings of democracy, or “ballotocracy,” are absent. A parliament that is more than a rubber stamp to the military regime in this phase of transition is essential because this first parliamentary assembly will be the one to legislate the constitution that was passed by popular referendum earlier this year, in a drafting process marred by a lack of political and demographic inclusion.

The elimination of public dissent

The protest law passed last November has led to the arrest and conviction of a vast array of voices of dissent. The law requires giving the Interior Ministry three days’ notice before any public meetings or electoral gatherings can be held, and applications can be denied. Violators of this law face up to seven years in prison and fines up to $1,500. This legislation is a method not only of arresting those who protest or advocate non-violent political action, but also of further silencing voices of dissent. According to Major General Abdel-Fattah Othman, unauthorized protests are “a challenge to the state and its prestige.”

While the international focus has been on the convictions of Ala Abdel Fattah and Ahmed Maher, thousands of Islamists have been detained since the ouster of President Muhammad Morsi. Last August’s violent removal of the sit-in at Rabaa al-Adawiya, which resulted in the deaths of over 1,400 people and the subsequent imprisonment of thousands of activists and sympathizers, has further marked the extent to which the state will eliminate and ultimately silence opposition.

The state is also seeking to control religion in the public sphere by tightening control on mosques, purging preachers in an attempt to control the messages issued from pulpits. As a result, the Religious Endowments Ministry, or Awqaf in Arabic, has issued strict guidelines for sermons, and anyone who strays from them in Egypt risks being removed from his post. Since last summer, 12,000 preachers have been barred from delivering sermons.

The removal of the “trappings” of democracy

When the military ousted President Morsi in July, it stated that parliamentary elections would take place before the presidential one. But in December, the order was reversed—essentially concentrating power in the hands of the man who would become president, allowing him to set the requirements for the parliamentary elections. It then came as no surprise when Abdel Fattah El-Sisi, Commander-in-Chief of the Egyptian Armed Forces and Minister of Defense, received permission from the Supreme Council of the Armed Forces to run for president last March—“to answer the call of the people.” Sisi has much support: the institution of the military, the security apparatus, the deep state, and Egyptians who want stability, which an army general symbolically provides. The constitution also widens the already broad privileges enjoyed by the army, by requiring the approval of the Supreme Council of the Armed Forces for the choice of a defense minister to serve for two full presidential terms.

Questions for the future

What then are elections, when true contestation is absent? Will the coming elections represent the interests of the people? Will they be free and fair, when the steps taken thus far have moved Egypt away from political inclusion and towards repression? On April 15, an Alexandria court issued a ban on members of the Muslim Brotherhood running for office in the forthcoming presidential and parliamentary elections—essentially banning the party of the ousted President from running and allowing Mubarak-era members of the National Democratic Party to return to their political positions.

Egypt’s legal framework remains authoritarian in nature. While the judiciary might be perceived as having a level of independence, laws that govern political and social life are reifying the authoritarian state by undermining accountability. When the state of emergency can be both lifted and reinstated, draconian protest laws can be issued, limits on the formation of political parties can be constitutional, and education and religion can be regulated by the state (and the legal establishment can protect this regulation), then the seeming independence of the judiciary is put into question. This can be fatal to the democratic mechanisms that lead to good governance.

Ultimately, Egyptian state institutions have little accountability. There is no mechanism for the enforcement of rights, and thus rights will remain unprotected. Under this new constitutionally protected regime, balance of power is absent, since balance is tipped in favor of the executive. The defense minister, a military appointee, serves for an eight-year term and has the ability to dissolve the parliament. In post-conflict situations the constitution is where reconciliation is made; it is where inclusion is guaranteed. However, in the case of Egypt, the constitution fails to guarantee these institutional protections of democracy.

When a society defines democracy narrowly and procedurally by limiting it to voting, it loses sight of the relationship between democracy and social goods. Since the third wave of democracy, we have learned that social goods protected and provided by the government ultimately improve human capital and establish a level of social justice in society. This improvement of human capital is facilitated through the development of democratic governance, which spreads political influence more evenly.

Under Egypt’s crystallizing dictatorship, political power is concentrated among a small fraction of the population. A constitutionally-secured military dictatorship is well on its way to becoming institutionalized. The current regime in Egypt, which is setting the stage for a Sisi presidency, a rubber-stamp legislative assembly, and perpetual state violence against voices of dissent, is redefining authoritarian control that is much more closely tied to the military and the deep state than it ever was under Mubarak. Welcome to Egypt: this is the new face of authoritarianism.

Dalia F. Fahmy is assistant professor of political science at LIU Brooklyn. She received her B.A. from New York University in politics and Middle Eastern studies, with a minor in peace and global policy studies. Dr. Fahmy then completed an M.A. from New York University in international relations. While pursuing her Ph.D. in political science at Rutgers University, she earned a second M.A. in comparative politics. Dr. Fahmy’s current research examines the intellectual and political development of modern Islamist movements.