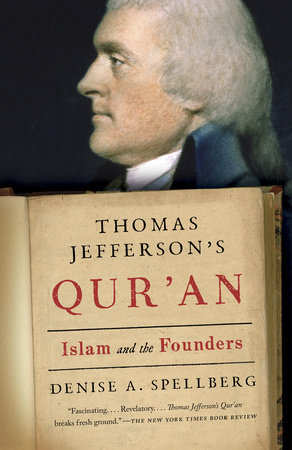 Denise Spellberg’s Thomas Jefferson’s Qur’an was released in 2013, in the middle of Barack Obama’s second term as president of the United States. As we were reminded during the 2016 election season, both of President Obama’s campaigns for presidency were marked by accusations that he was a practicing Muslim and debates as to the legitimacy of a president with such a religious identity. Spellberg’s book was published as a timely history of the religious freedom debates during the founding of the United States, emphasizing the choice that the Founding Fathers made to create a new nation open to all religions. As Spellberg describes in her historical account, Thomas Jefferson argued for the inclusion of Muslims without knowing a Muslim individual; his theoretical sense of welcome toward them extended hospitality and legal protection to other religious minority groups at the time, including Jews and Catholics.

Detailing these debates around religious pluralism, Spellberg contributed to the defense against Islamophobia championed by those such as former Secretary of State Colin Powell, who in response to questions of Obama’s Muslimness asked, “What if he is? Is there something wrong with being Muslim in this country?”

Now, in 2017, Powell’s question back to his interviewers is more potent, as support for Muslim Americans as fully American citizens seems to be up for debate. Though similar conflicts are happening in other countries as well, the history of American religious pluralism as a founding principle shapes the conversation in a certain way in the United States.

In this short series, four scholars reflect on rereading Spellberg’s text in 2017.

This series was guest-curated by editorial board member Anver Emon. -Eds.

The American tradition of tolerance and free speech

Much has happened since Denise Spellberg’s Thomas Jefferson’s Qur’an came out in 2013. When I first read it, I treasured…

From the Founders to Trump: The legalities of “Muslims”

Writing about the image of the “Muslim” at America’s founding, Denise Spellberg writes how debates on religious tests for office…