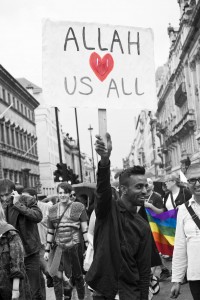 Earlier this summer, the Supreme Court of the United States confirmed the constitutional right of same-sex couples to marry. Unsurprisingly, debates on the meaning and future of marriage have not subsided, but have taken on new directions. Among the hottest topics of debate are how American Muslims should respond to the ruling and whether polygamy will be the next battleground.

American Muslims’ views on same-sex marriage have recently become an issue of wider public debate, and particularly in response to an open letter by Reza Aslan and The Daily Show correspondent Hasan Minhaj. Aslan and Minhaj’s letter is a political appeal for embracing the rights of LGBT communities. “No one is asking you to change your beliefs. If you feel your faith tells you that homosexuality is haram, fine,” they write to American Muslims.  Their contention is that American Muslims should empathize with and support other minority groups, because as a minority they know only too well about discrimination and the importance of enjoying legally protected rights.

We shouldn’t be perpetuating our marginalization by marginalizing others. Rejecting the right to same-sex marriage, but then expecting empathy for our community’s struggle, is hypocritical.

At HuffPost Live, Aslan and Minhaj spoke further about a critical moment of heightened tolerance in the U.S. and about the challenges that Muslims face when voicing their opinion.

Wondering whether Muslims outside the U.S. would support a “coalition of minorities,” BBC’s World Have Your Say asked young Muslims from different countries about their responses to the open letter. Participants were as hesitant as Aslan and Minhaj to enter a theological debate, but highlighted yet another motive for supporting gay rights: they suggested that American Muslims simply cannot afford to be critical of same-sex marriage given widespread anti-Muslim sentiment and the pressure to distance themselves from Islamic extremists, including the atrocities these have committed against homosexuals. Unlike their Christian and Jewish counterparts, Muslims who oppose gay marriage might not only be looked upon as too conservative but also (once more) as a threat to democratic values. One participant said:

If we want to show that Islam is truly a religion of peace, and being part of peace is accepting others and being at peace with others, then we must be able to demonstrate, we can peacefully coexist in a society where there are people whose beliefs, act or have sexual identities we don’t agree with.

BBC moderator Chloe Tilley raised the question of whether Muslims should be asked to support homosexual marriage in order to avoid “giving Americans another reasons to dislike them” and, further, whether it is not “a leap too far” to expect people to accept something that their faith and understanding of the Quran clearly forbids. Can—and should—shared political values trump individual religious beliefs?

Few writers have made a historical and religious case for Muslim support of homosexuality. Ali A. Olomi at ISLAMiCommentary argues that Islamic history also offers examples of toleration of same-sex relationships and romances. Revisiting the use of homoerotic imagery in Islamic poetry and historical evidence of same-sex romance, among other things, Olomi counters allegations that Muslims that accept non-heterosexual relationships are Westernized (for a similar position see this reference offered by Aslan and Minhaj and this publication). Muqtedar Khan for Al Jazeera America also suggests that transformations of the social and political landscape may eventually lead to a change in religious convictions.

True, Islamic law forbids homosexual relations. And same-sex marriage is considered a sin. Still, that does not mean this particular understanding of Islam is not contestable.

While American Muslims have become more assertive in commenting on the same-sex marriage ruling, it is not hard to see that those in support of LGBT rights have been the most vocal. Muslim dissenters, unlike those of other religious groups, have not spoken up to defend their disapproval of same-sex marriage in the public media. This silence may also be understood as prioritizing political choices over religious beliefs, albeit in a different way than envisioned by Aslan and Minah’s “coalition of minorities.”

Meanwhile, slippery slope arguments of a familiar sort have gained steam now that same-sex marriage is legal. A common hypothetical used against the legalization of same-sex marriage was that if same-sex marriage were allowed, polygamy, incest, and bestiality would be next. While the latter two remain strictly taboo, the possibility of polygamy becoming legal has been taken up by people across the socio-political spectrum. With Supreme Court justices themselves having raised the question of legal limits on the concept of marriage and the fundamental right to marry (see Associate Justice Sonia Sotomayor’s 2013 comments in the oral arguments over California’s Proposition 8 or Associate Justice Samuel Alito’s recent interview), it is no surprise to see political commentators and legal pundits weighing in as well.

At Religion Dispatches, William E. Smith engages with the wealth of arguments for and against the idea that “same-sex marriage is a slippery-slope-to-polygamy” to make a case for “a limited version” of the argument that “ends well before the plunge to bestiality or other ‘pro-family’ bogeymen.” As polygamy has gained acceptance, it has also gained more attention, yet both anti- and pro-same-sex marriage advocates have argued against it. Intriguingly, Smith notes, each side lays the blame for the increasing acceptance of polygamy at the feet of the other. Smith faults everyone for not recognizing current developments as part of a “larger reformation period of marriage” that includes the abolition of laws preventing interracial marriage, the advent of feminist movements, and changing practices within religious communities, and is unlikely to stop after the ruling in favor of same-sex marriage.

We have been busy overhauling our marital system at least as thoroughly as happened in the Protestant Reformation so we must ready ourselves for a debate on polygamy, as they had to. And the Reformation debates on, and experiments with, polygamy could be valuable resources—indeed, richer in this vein than they were for same-sex marriage. All of which is to say nothing of the easy biblical case that can be made for polygamy.

Much of the current talk seems to revolve around whether polygamy is in fact the next hot topic, rather than actually debating for/against polygamy, though there are some exceptions. William Baude writes for The New York Times that even if polygamy is next to be debated, the same-sex marriage debate should tell us that it’s difficult to predict how things will unfold.

The deeper point is that we should remember that today’s showstopping objections sometimes come to seem trivial decades later. Very few people supported a constitutional right to same-sex marriage when writers like Andrew Sullivan and Mr. Rauch were advocating it only two decades ago. (Judge [Richard A.] Posner, for example, did not.) As we witness more experiments with non-nuclear families, our views about plural marriage might change as well. As Justice Kennedy put it, “The nature of injustice is that we may not always see it in our own times.”

So the real force of the polygamy question is a lesson in humility. We should not assume that our judges have all the answers. And we should not assume we have them either. Instead we should recognize that once we abandon the rigid constraints of history, we cannot be sure that we know where the future will take us.