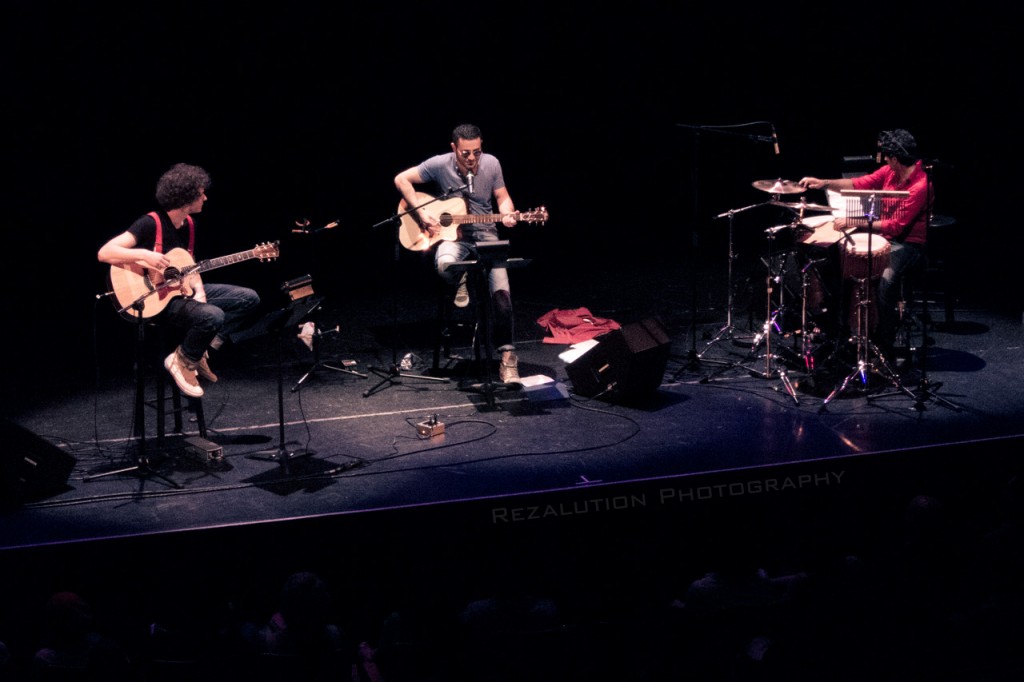 Shahin Najafi never set out to be a rapper, much less “Salman Rushdie of Rap,” but in early 2012, global notoriety was thrust upon the exiled Iranian singer after an ayatollah issued a fatwa against his single, “Naghi.” No doubt the young songwriter aimed to provoke—the track’s cover art depicts the dome of a well-known Shiite shrine re-imagined as a woman’s breast with a rainbow flag flying from the summit—but his satirical rhymes took aim at much more than Islam or conservative clerics. Nevertheless, Najafi became both victim and beneficiary of “catastrophic celebrity.”

How do you create “catastrophic celebrity”? First, find an artist whose work outrages some representative of a religious tradition, landing the artist in dire circumstances. Next, export the story of the outrage and the resulting drama out of its original cultural context, and count on others to disseminate the story without discovering or exploring this context. Several things result, the combination of which creates catastrophic celebrity. First, the artist’s creation gets framed in terms set not by the artist, but by the outraged party. Then, the artist becomes known more for the incident than for the art, while the outraged party simultaneously becomes known for the outcry alone. Meanwhile, readers are prevented from appreciating crucial complexities of the story and its participants. Rinse, lather, repost.

Shahin Najafi was born in 1980 in Bandar-e Anzali, a small town in northern Iran. As a teenager, he fell in love with the plaintive melodies of Quranic recitation and devoted himself to the art for four years. Kicked out of college before completing a degree in Islamic sociology, Najafi served in the military, where intimate familiarity with the struggles of his fellow soldiers—most of whom were working class and poor—shook his religious faith and stirred his political consciousness. After playing in an instrumental pop group and singing in a Gypsy Kings cover band, Najafi began to write his own songs, which soon drew the attention of the authorities. Escaping a sentence of three years in prison and 100 lashes for his politically subversive lyrics, he fled to Germany in 2004.

There Najafi played with several groups in the expatriate community and released Persian-language rock, blues, and hip hop songs on social and political subjects including the 2009 post-election violence, the killing of Neda Agha-Soltan, and the rape of Taraneh Mousavi. The track that catapulted Najafi’s name beyond Iran and the Persian diaspora was released in the context of a Facebook-based internet meme satirically attributing sayings to Ali an-Naghi, the so-called Tenth Imam revered by many Twelver Shia—Muslims who accept a series of divinely ordained spiritual and political successors to Muhammad and await the return of the “hidden” Twelfth Imam. Although no fan of hip-hop culture, Najafi chose rap as the “simple, direct and strong musical language” of the piece. Its pungent verses skewer popular pieties—“prayer rugs made in China”—portraying a society mired in hypocrisy, deprivation, and cultural decay, while not sparing secular activists—“fossilized pundits far from homeland.”

Following a judgment in April 2012 by Grand Ayatollah Lotfollah Safi Golpaygani, a senior cleric and teacher in the city of Qom (a traditional center of influential seminaries), the website Shia-Online.ir offered a $100,000 bounty on the artist’s head. On May 14, 2012, the story broke in the German and English press: The Guardian put him in the company of Sir Rushdie under the headline, “Iranian rapper faces death threats and fatwa for ‘blasphemous’ song.” Najafi went into hiding with protection from the German police.

The outpouring of murderous rage and credible threats on Najafi’s life was obviously catastrophic for him. But the calamity also brought a kind of global publicity that was, ironically, elevating and empowering. The records at Google Trends display a dramatic spike in searches for his name in May 2012. Overnight, Der Spiegel and the New York Times were taking him seriously in extended interviews. In fall 2012, he toured the United States, introducing himself to English-speaking audiences as a poet-provocateur, quoting Nietzsche and Adorno.

Yet even as a catastrophic celebrity makes use of the fleeting fame acquired by outrage-driven publicity, he longs for lasting appreciation grounded in the merits of his artistic achievement itself. What’s more, he recognizes that his momentary elevation brings with it the elevation of those who target him. At a public talk in New York City in October 2012, Najafi pointed out that while prior to the “Naghi” affair, Ayatollah Safi had been virtually unknown outside of Iran, the fatwa and its repercussions had made the 93-year-old scholar and his theological discourse globally relevant.

Ayatollah Safi did not take direct issue with Najafi’s blunt cultural and political commentary. Rather, he declared Najafi an apostate (murtadd, “one who turns from Islam”). In traditional Islamic law, apostasy or ridda is the crime—punishable by death according to many classical jurists—of leaving Islam either by converting to another faith or by becoming an unbeliever. Safi was accusing Najafi of willfully defying God and deserting the Muslim community by appropriating Naghi’s name and memory. Western journalists glossed over the Islamic particularities, translating the accusation as “blasphemy.”

Moreover, by focusing on inflamed religious sensibilities and blasphemy as the ostensibly salient and newsworthy category, international media stories constructed a frame that was congenial to the interests of the seminarian in Qom. Within this frame, Najafi was presented as having issued a skeptical judgment on the sanctity of a Shiite saint, thereby making a contribution to the religious tradition of the outraged cleric. Once this frame was iterated through derivative journalistic coverage, Najafi became internationally known for a contribution to a specifically religious discourse, despite his intention to make a wider cultural critique.

Interestingly, the singularly religious framing did not only deflect attention from Najafi’s own social and artistic aims—it also obscured fissures in Iranian structures of power. No liberal, Ayatollah Safi has been known, for example, for his view that playing or listening to any kind of music is forbidden in Islam. But, his relationship with the ruling powers in Tehran has been complicated. In fact, earlier in his career, Ayatollah Safi was a key player in the defining political struggle of post-revolutionary Iran, the constitutional crisis of the 1980s. From 1980 to 1988, Ayatollah Safi headed the Guardian Council, a body of six senior clerics and six Muslim lay lawyers mandated to determine the conformity of parliamentary legislation to Islamic law. During this period, the Council took issue with much legislation relating to land use, nationalization, and other economic measures that were held to run afoul of religiously grounded private property and contract rights. Escalating dissension eventually led to Supreme Leader Khomeini’s declaration in January 1988 of the doctrine of “Absolute Guardianship of the Islamic Jurist,” which placed the preservation of Islamic government—and the prerogatives of the Supreme Leader—above all personal religious rights and duties. Safi responded to this theologically radical notion with his resignation.

Safi’s oppositional stance continued during the Ahmadinejad era, when he joined with other senior clerics in condemning authoritarian abuses by the regime for reflecting poorly on Shiite theocracy as a model form of government. According to Le Monde, he went so far as to call the official narrative of the 2009 Iranian presidential elections a “grand lie.” Here, at least, the Ayatollah and the “apostate” Najafi agreed. But, like the singer’s own larger purposes, the cleric’s wider context did not fit comfortably within the religion-focused and conflict-driven narrative of catastrophic celebrity.

Sometimes the story that makes someone famous is not his story at all.

Austin Dacey is a philosopher and human rights activist whose work has appeared in numerous publications, including USA Today, Dissent, and The New York Times. He is author of the book The Future of Blasphemy: Speaking of the Sacred in an Age of Human Rights (Continuum, 2012).