A “pastoral earthquake” in Rome? 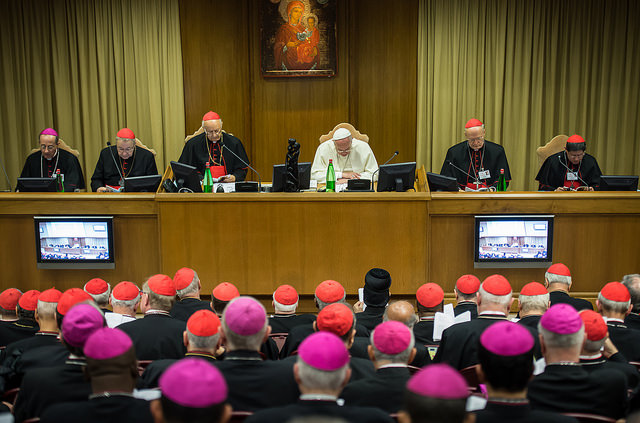 On October 13th, the Extraordinary Synod of Bishops on the Family, an assembly convened by Pope Francis, released a relatio post disceptationem—a snapshot of the discussion thus far—that has triggered much coverage and debate across the media landscape. As church leaders try to determine what exactly makes a Catholic family, the document seems to signal a softening stance on, among others things, divorce, homosexuality, and unmarried cohabitation. While reasserting Catholic doctrine that proclaims the “irregular” nature of such relationships and families, the document also acknowledges their “positive elements,” and frames the pastoral challenge as follows:

It is necessary to accept people in their concrete being, to know how to support their search, to encourage the wish for God and the will to feel fully part of the Church, also on the part of those who have experienced failure or find themselves in the most diverse situations. This requires that the doctrine of the faith, the basic content of which should be made increasingly better known, be proposed alongside with mercy.

Longtime Vatican journalist John Thavis—who called the document’s release a “pastoral earthquake“—has an excellent breakdown and summary of the relatio on his blog. He notes in particular the document’s emphasis on the gradualness which advocates patience and understanding for individuals to walk their own paths towards salvation.

In particular, the section of the relatio initially titled “Welcoming homosexual persons” has caused a stir. It originally reads:

Homosexuals have gifts and qualities to offer to the Christian community: are we capable of welcoming these people, guaranteeing to them a fraternal space in our communities? Often they wish to encounter a Church that offers them a welcoming home. Are our communities capable of providing that, accepting and valuing their sexual orientation, without compromising Catholic doctrine on the family and matrimony?

Without denying the moral problems connected to homosexual unions it has to be noted that there are cases in which mutual aid to the point of sacrifice constitutes a precious support in the life of the partners. Furthermore, the Church pays special attention to the children who live with couples of the same sex, emphasizing that the needs and rights of the little ones must always be given priority.

The shift in tone on homosexuality (though not in doctrine or teaching) has been greeted with enthusiasm by some observers, such as GLAAD and the Reverend James Martin, who called the document “a stunning change in the way that the Catholic church speaks about gay people.” But not all responses have been positive. Critics have described the language of the document as confusing—how can Catholicism avoid “any language or behavior which might be construed as discrimination” (section 46) if biblical and doctrinal teachings are very clear on some of these issues? R. R. Reno, the editor of religion journal First Things, describes such framing as a “route to the dictatorship of relativism,” while other commentators have stated that the document “[dilutes] Church teaching.”

The unofficial English translation of the document from the Vatican has added another complication. The synod, which was conducted in Italian instead of Latin, first created controversy by translating the word valutando as “valuing,” as opposed to “considering” or “weighing.” Then just yesterday, the translation underwent new edits, changing “Welcoming homosexual persons” to “Providing for homosexual persons,” and replacing “fraternal space” with “fellowship” and “precious support” with “valuable support.” It should be noted that the original Italian remains unaltered.

Many media outlets have highlighted the document’s section on homosexuals, including The New York Times (“At the Vatican, a Shift in Tone Toward Gays and Divorce”) and BBC (“Catholic synod: Vatican family review signals shift on homosexuality”). Given that the document is not so much a formal statement on theology as the minutes of a meeting, writers such as George Weigel at The National Review and Tim Stanley at The Daily Telegraph have criticized the coverage of the relatio as overstating its significance.

Meanwhile, church leaders themselves, including those at the synod, disagree about the document’s content. Some clergy have pressed for clarification on specific sections. Cardinal Raymond Burke, prefect of the Supreme Tribunal of the Apostolic Signatura, has said that the relatio was “[lacking] a solid foundation in the Sacred Scriptures and the Magisterium,” while Cardinal Timothy Dolan, Archbishop of New York, emphasized that it is a “draft document,” one that would need “major reworking.” Indeed, on October 14th, the Vatican released a statement emphasizing the relatio‘s status as a “working document,” saying that it does not want to create “the impression of a positive evaluation” of same-sex relationships or cohabiting couples.

Pope Francis looms large in discussions over the relatio, as he convened the synod and picked many of the committee members. Perhaps not surprisingly, the document largely calls for dialogue, listening, and understanding, in keeping with Francis’ policy of more discussing pastoral care and less affirming doctrinal purity—see his “who am I to judge” or “shepherds living with the smell of sheep” comments. Popes can choose what teachings to emphasis and what issues to downplay, and Francis’ papacy has been different in image and tone from his predecessor. But without any meaningful changes to catechism on these sensitive topics, it remains to be seen whether Francis will actually usher in a “Vatican Spring.”