The following is excerpted from the introduction to Rethinking Religion and World Affairs (Oxford University Press, 2012), produced in conjunction with the SSRC’s project on religion and international affairs.—Ed. 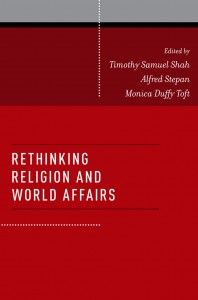 Four guided missiles packed with explosive material hurtled into the morning sky. Though the day was brilliant blue and cloudless, no one saw them coming. They were aimed at a nation that did not see itself at war. Moreover, it was a nation convinced that missiles fired in anger no longer posed a serious threat to its security. The weapons were conventional in the strict sense: they did not carry nuclear warheads.

But the weapons and the attackers who launched them were anything but conventional. The 19 hijackers who commandeered four civilian jetliners on the morning of September 11, 2001, were not sent by a state or nation. They were not motivated by any purely secular or political cause. Born of religious zeal, they sought to strike a blow against a power they believed was in thralldom and service to Satan. Motivated by faith, they wanted to strike a blow for Allah.

Religion, which was supposed to have been permanently sidelined by secularization, suddenly appeared to be at the center of world affairs. Seemingly without warning, faith had transgressed the neat boundaries that organized the thinking and planning of our best and brightest policy makers, policy analysts, and scholars. Religious believers were supposed to stay confined to one side of the boundary that sealed private faith off from global public affairs—a boundary that separated the irrational from the rational, the mystical from the purposeful. However, guided by an astonishing combination of zealous faith and coolly calculating rationality, September 11 showed that organized religious believers could act with purpose, power, and public consequence.

And we—not only America, but the whole world of professional policy-making and analysis—were unprepared. As Robert Keohane, a leading international relations scholar, had the humility to admit shortly afterward:

The attacks of September 11 reveal that all mainstream theories of world politics are relentlessly secular with respect to motivation. They ignore the impact of religion, despite the fact that world-shaking political movements have so often been fueled by religious fervor. None of them takes very seriously the human desire to dominate or to hate—both so strong in history and in classical realist thought. [emphasis added]

In his own post-9/11 analysis, however, Keohane also had the honesty to say: “Since I have few insights into religious motivations in world politics, I will leave this subject to those who are more qualified to address it.”

This edited volume picks up where Keohane left off. In the light of religion’s global resurgence, most dramatized by 9/11, it attempts a radical rethinking of the relationship between religion and world affairs, hence the title. It brings together scholars who are eminently qualified to analyze how and why religious motivations, actors, ideas, and organizations matter for contemporary world affairs. It addresses some of the reasons that theories of world politics and world affairs have been slow to address religious factors, how and why religious factors are influencing important global dynamics, and how we need to adapt our theories of world affairs to the realities and implications of this resurgence.

There was once a virtually unbroken consensus in the foundational works of social science about modernization and religion. One part of this consensus was empirical or factual. The other was normative or ethical. The empirical assumption was that with economic modernization or “development,” religion would decline. The ethical assumption was that with political modernization and its attendant “democratization,” religion should be confined to the private sphere. Description and prescription went happily together.

Both parts of this consensus are now in question. The September 11 attacks clearly demonstrated that the consensus was wrong. Well before and apart from September 11, however, the consensus was increasingly difficult to sustain. A multitude of simultaneously developed and vibrantly religious societies—starting with the United States—explodes the empirical assumption. A multitude of simultaneously democratic and luxuriantly faith-saturated societies—including India, Turkey, and Indonesia—explodes the ethical assumption. And ten years after September 11, 2001, religious militancy remains a powerful force—in Iraq, Afghanistan, Pakistan, Nigeria, and numerous other locales—that individual governments and the international community have proven unable to defeat or even contain.

This old consensus is nevertheless stubborn. It still structures much of our study and understanding of the role of religion in world affairs. It does so because many of the concepts and conceptual distinctions on which it was founded remain firmly lodged in the minds of international relations scholars, as Bryan Hehir describes in chapter 1 of this book. The meaning of concepts such as “secularism,” “modernity,” “power,” and “public life” is assumed without hesitation or complication. With equal confidence, a sharp boundary is drawn between these concepts and phenomena assumed to be their polar opposites: “religion,” “tradition,” “theology,” “faith,” and “private worship.”

Much classical thinking and practice in world affairs is thus a form of border patrol. It is concerned with policing and strengthening the fence between two worlds. The first world is the “secular” and “public” world in which international actors—nation-states and the multilateral organizations that bind them together—are presumed to make rational choices in the pursuit of political and economic power. The second world is the “spiritual” and “private” world in which religious actors—everything from church hierarchies to clerical councils to violent organizations such as Al Qaeda and Hizbollah—are presumed to make faith-based choices in the pursuit of nonrational or irrational goals. As with the empirical assumption about religion and economic development, the factual assumption about these two worlds is that they are two separate universes, with little to no mutual contact or interaction. As with the ethical or normative assumption about religion and political democratization, the ethical or moral assumption about these two worlds is that they should be kept as far apart as possible.

However, it is true that what could be called classical secularization theory recognized the reality and legitimacy of some traffic between these two universes. Classical secularization theory assumed the descriptive and prescriptive forms noted at the beginning: it expected the automatic decline of religion in the face of development and required the hermetic isolation of religion in the face of democracy. On one hand, the forces of development and progress would so impinge on the world of religion that religion would have little to do and less space in which to do it. Modern progress would make the security and comfort offered by religion increasingly unnecessary. Modernization, in other words, would infiltrate, occupy, and diminish the world of the spirit, fostering the “disenchantment” that Max Weber made central to his understanding of modernity. On the other hand, secularization theory held that the forces of democracy should reform and regulate religion to make it compatible with freedom—to inculcate habits of autonomy and rational reflection and encourage individuals to forge new identities as democratic citizens. On closer inspection, in other words, classical secularization theory imagined that the religious and political worlds would and should interrelate to a significant extent.

The crucial point, however, is that the secularization theorists who assigned themselves the task of managing the points of contact between the public “secular” world and the private “spiritual” world allowed—and expected—traffic to flow in only one direction.

The result of this stringent and one-way boundary maintenance has been the long-standing exclusion of religion and religious actors from the systematic study of world politics in general and international relations in particular. This has created a paradoxical situation: religion has become one of the most influential factors in world affairs in the last generation but remains one of the least examined factors in the professional study and practice of world affairs.

For example, the lead journal for political science in the United States is the American Political Science Review (APSR). In its 100th anniversary issue, an article concluded that “prior to 1960 only a single APSR article sought to use religion as a variable to explain empirical phenomena” and that in APSR “from 1980 on, just one article in American Government put religious factors at the center of analysis; and just two in Comparative Politics.” A similar neglect marked the international relations literature. Daniel Philpott, a contributor to this book, judged that in his survey of leading journals of international relations from 1980 to 1999, “only six or so out of a total of about sixteen hundred featured religion as an important influence.” This neglect of religion in research is echoed in teaching. One of the coeditors of this volume, Alfred Stepan, teaches at one of America’s largest and oldest schools dedicated to training graduate students for international careers in government, political analysis, international organizations, the media, human rights, the private sector, and academia: the School of International and Public Affairs at Columbia University. He is currently teaching the first general course on the role of religion in world affairs in the school’s fifty-year history.

Rethinking Religion and World Affairs represents a collective effort to rethink religion and world affairs by questioning the sharp empirical and ethical boundaries that have separated the two. A working group of leading scholars and policy practitioners concerned with religion in the contemporary world was convened by the Social Science Research Council (SSRC) in New York, with the generous support of the Henry Luce Foundation, to devise strategies to transcend this state of affairs. It soon became apparent that thousands of professors never trained in religion and world affairs would be asked to design and teach new courses, media newsrooms to report on religion in greater depth, and legislators, foreign policy makers, humanitarian organizations, development agencies, and feminist and human rights groups to devise new and more appropriate approaches to religion.

Timothy Samuel Shah is associate director of the Religious Freedom Project at the Berkley Center For Religion, Peace, and World Affairs and visiting assistant professor in the Government Department at Georgetown University. He is a political scientist specializing in the relationship between religion and political freedom in theory, history, and contemporary practice. Shah is author of God’s Century: Resurgent Religion and Global Politics (W.W. Norton, 2011), with Monica Duffy Toft and Daniel Philpott, and is editor of an Oxford University Press series on “Evangelical Christianity and Democracy in the Global South” that has so far generated three volumes. His articles on religion and global politics have appeared in Foreign Affairs, Foreign Policy, the Journal of Democracy, the Review of Politics, and elsewhere.