An empirical perspective on religious and secular reasons 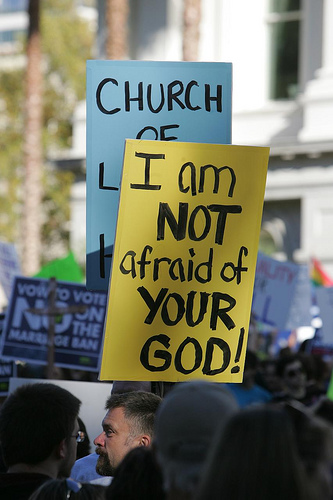 This “religion in the public sphere” thread has featured debates about whether citizens of liberal democratic societies can offer religious reasons for public laws that will be coercive on all citizens, or whether they must use, in John Rawls’s terms, “public reason.” An example of a policy that would apply to all citizens is gay marriage, and we have all encountered religious reasons for banning gay marriage, such as, “Leviticus 18:22 tells us that homosexuality is an abomination before God.” “Public reason” is a bit more obscure, but liberal theorists mean by the term general reasons that are widely or near universally shared by citizens. This would preclude reasons deriving from any “comprehensive perspective,” such as religion, obviously including Leviticus 18:22. On the other hand, to “avoid harm” is a public reason because it is near universally held, and this reason is used by opponents of gay marriage when they argue that gay marriage harms children. (Whether the reason is legitimate in this case is a separate matter.)

It is critical for our society that we get this normative debate right, for the stakes are high. We face increasing religious diversity. Liberal theorists, like Rawls, say that unless we keep religious reasons out of the public sphere, we could descend into a religiously motivated civil war similar to the Thirty Years’ War of the sixteenth century. On the other hand, critics of liberal theorists, like religious ethicist Charles Mathewes, say that unless we allow each other to talk about our deep differences, such as our religious beliefs, we could descend into the same nightmare that concerns the liberal theorists.

This normative debate is about what people should do in public debates, but knowing what people actually do would allow theorists to develop greater nuance in their analyses. When we see what people actually do, we can further inquire as to whether there are social structures that are pushing people toward good or bad behavior. For example, it is possible that the normative structure of the contemporary public sphere works so strongly against certain normative proposals that they should just be abandoned as utopian. Moreover, it is possible that we may gain normative wisdom from the collective practices of citizens. In any event, given the many hundreds of normative analyses, some empirical examinations may usefully agitate the debate.

With this continuum in mind, the research on the religious Right suggests that near the “actual power” end of the spectrum, religious people do not want to give religious reasons, because they do not work.  If they do not work to mobilize a sub-group of citizens to  advocate for banning abortion, they are not going to be effective for forging a majority vote in Congress, which in theory is just as pluralistic as the citizenry. Thus, Eberle and Taylor seem to be arguing for a right that no one would ever use. Political scientists have found that religious Right activists still use religious reasons, but only when among members of their religious group. Given that they are not violating the basic norm of using religious reasons in public, the more subtle normative question is whether having “real” religious reasons is normatively improper.

The use of religious reasons by ordinary citizens talking over the fencepost may be different than their use by activists. I recently published an empirical analysis of whether there is a shared moral language among diverse religious people in the U.S. used in debates over reproductive genetic technologies. In one chapter, I evaluate whether people would want to refer to religious reasons in discussing reproductive genetics with their neighbors. I asked in-depth interview respondents whether one should explain one’s position on reproductive genetic technologies to a Hindu neighbor “using religious terms or secular terms.”

In my interviews, a majority of the people thought one should use religious discourse with the Hindu neighbor, with conservative Protestants being the most likely to say so. Interestingly, a majority of the secular respondents also thought that one should use religious discourse, which I will address below. The most prevalent reason given for advocating the use of religious reasons is that using only secular reasons is not possible if you are religious. For example, a Pentecostal woman said that she would use religious reasons because “that’s who I am . . . so that’s probably how it would come across.” A traditional evangelical woman said, “I can’t separate that because my spiritual beliefs influence everything I do and say. If I really feel that that’s the core of who I am, then to say, ‘it only influences me some of the time,’ is a mistake.”

This seems to be empirical support for the claim made by Calhoun and many others, such as Wolterstorff and Habermas, that people who are religious cannot separate out their religious reasons and their secular reasons—or, more subtly, that they cannot translate between the two. They have no choice but to use religious reasons.

Not quite. Like the religious Right activists described by political scientists, respondents actually wanted to start the conversation with secular reasons in order to be understood. As one evangelical said, he tries to avoid “Christian speak” because “nobody knows what the heck you are talking about.” However, if they were asked to give reasons for their reasons, then the respondents thought that eventually their religious reasons would have to be brought into the conversation, because those are “behind” everything.

There are two implications here for producing a more nuanced normative theory. First, it seems that both professional activists and ordinary religious people, including religious conservatives, want to use public reasons in the public sphere. While social movement organizations may just provide one reason, in an actual conversation between two people, reasons beget reasons. Eventually, religious reasons will be given by those who have them. If you scan the normative literature, you will be hard pressed to figure out whether giving a religious reason as a second- or third-order reason is thought to diminish the possibility of conflict or offense. A second implication is that, contrary to what many theorists maintain, religious people appear to be quite capable of translating between religious and secular reasons, as they claim to first present secular reasons, and only later the “real” religious reasons “behind” those secular reasons, in public debate.

These data speak to another normative issue. Calhoun, expanding on Habermas’s notion of translation, explores the idea that what is needed is not the translation of religious reasons into secular reasons, or the exclusive use of one or the other, but “mutual interrogation,” or a “complementary learning process” about people’s real reasons, religious or otherwise. What would happen if people started invoking their comprehensive perspectives by using religious reasons? Famously, Richard Rorty claimed that religious reasons are a conversation-stopper, because they are unintelligible to those who do not share one’s religious beliefs. So, if Rorty is correct, Habermas’s translation proposal will never work.

Ordinary religious people turn the intelligibility argument on its head. Even though religious reasons are second-order, having religious reasons and not using them is considered insincere. To actually understand the other person’s argument, you have to hear their religious reasons if they have them. As one interviewee said, “it would be disingenuous to use strictly secular terms. I wouldn’t want them to explain their decision to me without their faith being part of it, so I think we both ought to be able to use faith terms to understand the decision making.”

Interestingly, the secular respondents did not want religious people to give secular reasons. Their reasoning is: if this is how a religious person thinks, why shouldn’t they be able to talk that way? Of course, many of the secular people added that they were not going to be convinced by the religious reasons, but they would want others to offer such reasons if they wanted to.  My interview question asked about someone whom the respondent knows, whom they expect would be civil in discussion, and not someone whom they consider intolerant. This suggests that if normative theorists conclude that Habermas is right that we should engage in mutual translation, or that Calhoun is correct that we should pursue “transformation” through conversation about our deep differences, at least the religious people in the U.S. seem willing to engage in translation or transformation with people they know.

This is but a sampling of the normative insights that can be developed from the limited existing empirical data on the use of religious reasons in the public sphere. It would be helpful for normative theorists to identify the critical empirical questions that they have, and for empiricists to discuss with them what is actually possible to determine. Working together, the two groups could really shake up the debate about this critical social issue.