Since November 9, 2016, when the first exit polls for the presidential election revealed that 81 percent of white evangelicals voted for Donald Trump, pundits have been fixated on this statistic. Analysts from across the political and theological spectrums have parsed the percentage in numerous ways in their efforts to explain why such an overwhelming majority of “family values” Christians supported a thrice-married casino mogul who bragged about sexually assaulting women, ridiculed veterans, mocked the disabled, and admitted that he had never felt a need to ask God for forgiveness.1 Countless news outlets have published on this topic, including USA Today, The Atlantic, The National Review, and Politico. Some commentators speculated that four out of five white evangelicals backed Trump for economic reasons; others insisted that scruples about abortion outweighed all other factors. A year and a half later, with polls showing that 75 percent of white evangelicals still approve of the president despite revelations about his alleged affair with a porn star (among other scandals), the debate over how to make sense of this reality rages on.

Rather than continuing to conjecture about Trump’s most faithful constituency, what if observers of contemporary American Christianity asked a different question? What if analysts considered the 19 percent of white evangelicals who did not vote for Trump, or the 25 percent who currently disapprove of him? Better yet, what if commentators stopped reproducing what Melani McAlister calls “a common, and erroneous journalistic frame—one that construct[s] the definition of evangelicals as universally white and conservative”? What might we learn from shifting the focus—or broadening the scope—to include progressive evangelicals and evangelicals of color within but also outside of the United States? 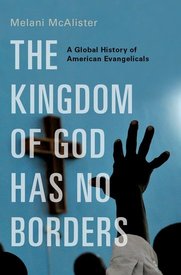 In The Kingdom of God Has No Borders: A Global History of American Evangelicals, McAlister raises and responds to these questions. She joins a growing cadre of scholars who have begun to expand the definition of evangelicalism beyond conventional boundaries by paying attention to politically, racially, and geographically diverse groups that have always been a significant, but often overlooked, part of the tradition. Building on works such as David R. Swartz’s Moral Minority: The Evangelical Left in an Age of Conservatism (2012) and Brantley W. Gasaway’s Progressive Evangelicals and the Pursuit of Social Justice (2014), both of which concentrate primarily on the United States, McAlister widens the purview of her study by exploring “how American evangelicals have engaged the world beyond their borders over the last fifty years, particularly in the Middle East and Africa.” McAlister’s approach enables her to uncover the transnational networks and relationships that helped fuel the rise of both the Religious Right and the Evangelical Left in the latter decades of the twentieth century. The result is a much more comprehensive and complex understanding of the evangelical movement from the postwar era to the present. “When we look at the history of American evangelicalism through a global lens,” McAlister contends, “the picture changes significantly. Evangelical politics are not only about abortion and same-sex marriage, but also colonialism and neocolonialism, war and global poverty, religious freedom and Islam. The profound political differences that exist among evangelicals are easier to see if your vision encompasses both Kinshasa and Kansas.”

One feature of evangelicalism that becomes most visible from McAlister’s global vantage point is the centrality of suffering as an ideal among believers of all nations and political persuasions. Since Christianity is based on faith in Jesus as a crucified savior who endured physical torture, spiritual desolation, and an agonizing death for the sake of humanity, evangelical affinity for motifs of persecution and martyrdom should come as no surprise. Christians throughout the ages have venerated saints shredded to pieces by wild beasts in Roman coliseums, or marked in their bodies by stigmata representing the wounds of Jesus’s passion, or burned at the stake for refusing to recant their convictions. What is astonishing, McAlister shows, are the myriad—and often incongruous—ways in which evangelicals around the world have deployed the trope of sanctified suffering for a wide range of political purposes in recent decades. “The moral power of suffering,” McAlister explains, animated “almost every evangelical social movement, on the right or the left in the late twentieth century”: from anti-communist crusades to anti-apartheid activism, from pro-life organizing to poverty-relief and development projects, from advocacy for religious freedom to anti-racist campaigns. By analyzing how evangelicals have identified—and identified with—victims of persecution enduring various forms of oppression or injustice since the Second World War, McAlister highlights “how capacious, how contradictory, and how potent the politics of suffering could be.”

Although evangelicals across the globe have embraced the rhetoric of Christian martyrdom to advance a variety of divergent aims, the discourse of sanctified suffering has not operated equally in all times and places. If “victim identification” is a kind “currency” that “circulates everywhere in evangelical life, in the United States and beyond,” its value has fluctuated depending on who is using it and what they are attempting to acquire. On the one hand, McAlister argues, a shared theological language and common concern for Christian persecution has enabled evangelicals from outside the United States to appeal to their American counterparts for sympathy and support. These petitions have often resulted in outpourings of compassion, and sometimes monetary or material aid. In such instances, the “border-spanning power” of testimonies and images of bodies in pain have produced forms of transnational solidarity among evangelical communities around the world. On the other hand, only certain types of entreaties have generated a generous response. When Congolese evangelicals attempted to assert their autonomy from Western missionaries during decolonization, or demanded better pay for their work as teachers, for example, their more conservative American colleagues resisted. Both parties espoused “the righteousness of suffering and sacrifice,” McAlister explains. “What was up for debate was whose suffering mattered and how it would be made visible.” And, as she demonstrates, American evangelicals have historically held the power to determine the outcome of such deliberations.

From their position of privilege, many American evangelicals have depicted the afflictions of distant Christians through portrayals that preserve established political, economic, and social hierarchies. McAlister explores a few of these throughout her book. The National Geographic-style photographs of “Unreached People Groups” published by Fuller Seminary’s School of World Mission, for example, “invited believers to both identify with and exoticize the unreached at the same time.” Similarly, the website of Open Doors—an organization that smuggles Bibles to “persecuted Christians worldwide”—“reproduced romanticized images of abject-yet-beautiful people in need of Westerners to save them.” Representing suffering others in ways that emphasize their helplessness, McAlister contends, has allowed American evangelicals to “construct an image of themselves” as heroic rescuers of fellow believers in distress. Although such depictions of people living in “spiritual darkness” or enduring bodily pain may prompt viewers to offer sympathy and aid, McAlister reminds us that expressions of compassion are “inevitably, about power.” Compassion can lead to solidarity with sufferers, and it might even inspire some to greater political awareness about the realities of structural injustice, but often evangelical compassion is “a form of self-gratifying performance” that reflects American condescension and a “shallow . . . sentimental, depoliticized” understanding of global inequities.

Seeking to identify and address the root causes of poverty and oppression would require American evangelicals to recognize their own prejudices and relinquish their social and economic advantages. Instead, many choose to idealize the distress of Christians elsewhere and then to “vicariously embrace the suffering of others” by positioning “themselves as persecuted by a secular American public, making them fellow victims in a global assault on Christianity.” For these believers, the iconography of martyrdom has served as a means of attempting to maintain their favored status at a moment when many of their co-religionists in Africa, the Middle East, and elsewhere around the globe, are asserting their independence from Western authority, demanding a redistribution of resources, and advancing theological and social agendas that do not always accord with those of their counterparts in the United States. By attending to the ways evangelicals from other regions of the world have reshaped “transnational evangelical politics” over the past half-century, McAlister sheds light on the global influences that have transformed American evangelicalism during these decades. Forced to face “the genuine and sometimes uncomfortable limits of their power,” some American evangelicals have confessed their complicity in creating unjust systems and grappled with how to dismantle the structures of colonialism, racism, and inequality that still disfigure the “body of Christ.” But others have responded to the rapidly changing dynamics and demographics of global evangelicalism with escalating anxiety, resentment, and aggression.

The 81 percent of white American evangelicals who voted for Donald Trump may hope his efforts to enforce immigration bans and build walls will protect their privileged place in the United States and in an increasingly globalizing world. But McAlister’s expansive study shows that attempts to fortify the racial, economic, and social barriers that have historically divided the Christian community are encountering growing resistance from followers of Jesus who believe the kingdom of God has no borders.

Heather D. Curtis is associate professor in the department of religion and Director of American Studies at Tufts University. She is the author of Faith in the Great Physician: Suffering and Divine Healing in American Culture, 1860-1900 (2007) which was awarded the Frank S. and Elizabeth D. Brewer prize from the American Society of Church History for the best first book in the History of Christianity. Her recent book, Holy Humanitarians: American Evangelicals and Global Aid (Harvard University Press, 2018) examines the crucial role popular religious media played in the extension of US aid at home and abroad from the late-nineteenth to the early twentieth century.