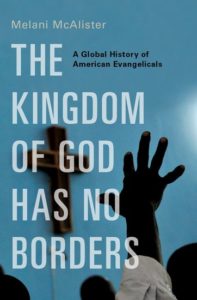 It is one thing to write a good book. It is another thing entirely to write a timely book, and given the choice, most people would settle for the latter. Melani McAlister does not have to make this choice, for with the publication of The Kingdom of God Has No Borders, she has managed to achieve both. She has written an absolutely brilliant and totally absorbing book on American evangelicals at the precise historical moment when American evangelicals and evangelical politics have come under persistent academic and public scrutiny, perhaps the most intense and most searching in a generation. We all know why.

This book has suffered a protracted gestation, and the world into which The Kingdom of God is released is, morally and politically speaking, arguably a radically different one from that in which the idea for the book was originally conceived over a decade ago. But I cannot imagine Professor McAlister complaining. Good things usually come to those who wait, and she must surely feel that all that time spent trying versions of different chapters on audiences at workshops, conferences, and public lectures, and importuning an endless list of interlocutors, is justified by the exquisite timing of its eventual release. Not only that, it has given the author the needed time to carefully consider and polish her arguments. The result is a tightly argued and richly illustrated book that takes the claims and theological projects of American evangelicals seriously, while at the same time paying close attention to the rapidly changing national, regional, and global contexts in which evangelicals pursue their commitments.

For several reasons, most notably their direct implication in America’s perennial “culture wars,” American evangelicals have enjoyed considerable scholarly attention from sociologists of religion, historians, theologians, and political scientists. Thus regarded, The Kingdom of God merely complements an existing archive. But to see it that way is to sell the book short and misjudge its ambition. Where, crucially, The Kingdom of God breaks from the existing literature is in its global orientation—American evangelical activity abroad and the consequences and contradictions arising therefrom.

For all its popularity, the depiction is at best a caricature, hyperbolizing the agency of American evangelicals even as it downplays the agency of their African counterparts. In The Kingdom of God, not only does McAlister demonstrate why the caricature is in fact a caricature, she describes a complex transnational political and agential landscape in which American evangelicals, far from looking down on their African (or Asian, or Latin American) counterparts, often find themselves caught up in moral and ideological contestations in which it is not always clear who has the upper hand because power is constantly changing hands. While African evangelicals may not be able to boast of being “blessed” with the morally ambiguous backing of an almighty state (pardon the pun), they are sharply aware of their nascent power as thought leaders from a continent that is now widely recognized as the center of global charismatic resurgence. At any rate, and as McAlister’s analysis shows, American evangelicalism, often riddled by racial tensions, and ambivalent to the proper way of responding to the legacy of the Enlightenment, is not exactly a homogenous category. Accordingly, not only is the category of “evangelical” deeply problematic, attempts to construct a global ecclesiastical class are intrinsically fraught.

For anyone seeking solid and informed answers (not to be mistaken for assurances) to questions that unceasingly perplex watchers of American (evangelical) politics [for instance, how to account for the virtual subsumption of American evangelicals under the flag of the Republican Party and the fact that the “evangelical left” is today something of an oxymoron], The Kingdom of God is rich in perspective, empirical detail, theological and intellectual insight, and the telling anecdote; not to mention useful biographical and professional information relating to key agents. In paragraph after paragraph, McAlister’s expertise on the history of American evangelicalism and the evolution of a global evangelical public sphere shines through. So, too, does her intimate familiarity with the literature—American and global.

McAlister’s use of three conceptual matrixes—networks, body politics, and emotions—to anchor her analysis gives us an indication of the sheer complexity of her empirical material. In this approach, she generally succeeds. If I have any grouse in this regard, it is that although these matrixes work as what she calls “significant component(s) of evangelical global reach,” the possible dynamics and implications of their interrelation as narrative poles are not pursued. Nor are we, while we are on that theme, allowed to ponder the ways in which a combination of components—and perhaps all three components—can converge in the same case. If we agree for instance that where bodies are involved, emotions tend not to be too far away, the discussion of the alliance of American and Ugandan evangelicals which produced the infamous Anti-Homosexuality bill in Uganda, conducted under the rubric of “Emotions,” would not be out of place under “Body Politics.” I bring this up not to indict McAlister, but to signal the wealth of analytic possibilities implied by her conceptual apparatus. Thus, instead of The Kingdom of God’s legitimate exploration of emotions as “forms of public discourse” that open up public discourse, we might equally consider them as obstructions or hindrances to civic conversation.

The prospect of mobilization of emotions to facilitate or obstruct public discourse brings me to the subject of power. The Kingdom of God has many telling illustrations of how American evangelicals are “galvanized by a vision of their own (global) persecution,” and how that vision is regularly translated into political commitments. Hell hath no fury than an evangelical threatened. But one has to wonder the extent to which this vision of the world as a place of perennial menace is real, and how far “victim identification” serves the evangelical community as a means to leverage its influence for power. While, as McAlister demonstrates, evangelical opinion on most issues can be sharply divergent, evangelicals can be unusually solidary and hardnosed when it comes to the pursuit of a corporate objective. Which is why, in discussing a group with such a knack for politics, I wish The Kingdom of God devoted more space to an exploration of power, specifically evangelical ideas about political power. The omission is especially pertinent given McAlister’s admission that “When American evangelicals are able to harness the power of the state, they shape religious communities and global politics alike.” American, and to a lesser extent, global, readers of the book must wonder what is to come considering the rapprochement between evangelicals and the current occupant of the White House. How will evangelical access to the power of the American state shape American politics?

The Kingdom of God Has No Borders will come to be appreciated, deservedly, as a major bend in the intellectual river. Not only does McAlister convincingly argue that American evangelicals are the very opposite of their popular parody as a single issue religious group (think of NGOs with Bibles), she shows that only a transnational perspective can do justice to the many issues with which evangelicals are engaged, the variety of agents involved in those engagements, and the fluidity of the political terrain on which these contestations are taking place. In a way, I see The Kingdom of God as an unwitting companion piece to sociologist Peggy Levitt’s God Needs No Passport: Immigrants and the Changing American Religious Landscape (2007). While Levitt’s book focuses on how immigrants are transforming the religious landscape in the United States, McAlister’s book is about evangelical internationalism, and a wager that the history of American evangelicalism cannot be fully understood through a domestic lens. That this is long overdue goes without saying, and scholars of religion in America, American history, and history of global Christianity, owe a profound debt of gratitude to McAlister.

Ebenezer Obadare is professor of sociology at the University of Kansas and Research Fellow at the Research Institute for Theology and Religion, University of South Africa. His research has concentrated on the civil society-state interface, with particular interest in informal strategies of resistance under changing dynamics of rule. He has also researched and published extensively on religion and politics, civic engagement, and citizenship in Africa. His latest book is Pentecostal Republic: Religion and the Struggle for State Power in Nigeria (Zed Books/University of Chicago Press, 2018). He is the author of Humor, Silence, and Civil Society in Nigeria (University of Rochester Press, 2016), editor of The Handbook of Civil Society in Africa (Springer, 2014), and co-editor of Civic Agency in Africa: Arts of Resistance in the 21st Century (James Currey, 2014) and four other books.