Discussions of religion in public life usually presume two things about religious conviction: it focuses on a set of beliefs and it is sincere. I would like to suggest an alternative starting point: conviction can emerge through practice and sincerity may not be among the most terribly important or interesting components of conviction. To clarify what I mean, let me offer an example from the history of feminist and queer activism, one in which religion emerges in the public square through the style of camp. 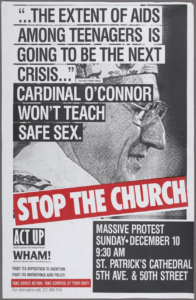 Picture it: New York City, December 1989. A man with long, dark brown hair, a stringy beard, and a crown of thorns joins about 4500 lesbians and gays, feminists, and AIDS activists marching down Fifth Avenue to St. Patrick’s Cathedral.

“This is Jesus Christ! I’m in front of St. Patrick’s Cathedral on Sunday,” he reports from the street. He holds a microphone and speaks directly to the camera. The sounds of protest blend into the daily discord of midtown Manhattan. “Inside,” Jesus speaks over the noise, “Cardinal O’Connor is busy spreading his lies and rumors about the position of lesbians and gays. We’re here to say, we want to go to heaven, too!”

They were protesting the Roman Catholic Church’s opposition to abortion rights, safe sex education, and gay rights. This “Stop the Church” protest was organized by two activist groups, the AIDS Coalition to Unleash Power (ACT UP) and the Woman’s Health Action and Mobilization (WHAM!). They targeted the Catholic bishops, especially Cardinal John O’Connor, the Archbishop of New York, who promoted conservative positions on sexual and public health issues in local and national political battles. Amidst culture wars battles over gender and sexuality, the Church hierarchy reiterated what they considered traditional teachings regarding heterosexual sex, the gendered division of the priesthood, the ban on contraceptives, and opposition to access to abortion—positions that often left “other Catholics” in tension with the official Roman Catholic Church or altogether outside of it.

A number of protesters, some Catholic and some not, found themselves directly opposing the Church hierarchy’s involvement in political issues. Outside St. Patrick’s, activists carried signs with phrases like “Keep Your Rosaries Off My Ovaries” and “Keep Your Church Out of My Crotch.” Some dressed in clerical drag, mocking the authority (and headgear) of the bishops. Others carried racy pictures, like one of a particularly well-muscled Jesus sporting a large erection and promoting condoms. Inside the cathedral, activists blended in with regular Sunday parishioners. When O’Connor started his homily, several protesters began dropping to the floor of the aisles. Through this action—a “mass die in”—they publicized the many lives lost, they contended, because of the Church’s positions on abortion and sexuality.

That day Jesus Christ was played by Chicano AIDS activist Ray Navarro, who was a member of the ACT UP/NY affinity group and video-activist collective DIVA TV. Scenes from the protest would appear in DIVA TV’s 1990 documentary Like a Prayer and more recently in David France’s How to Survive a Plague, which was nominated for an Academy Award for Best Documentary Feature, and Jim Hubbard and Sarah Schulman’s wonderful United in Anger: A History of ACT UP. Here I want to emphasize the strategy of camp at work in Navarro’s Jesus drag to suggest a mode of religious conviction that challenges belief and sincerity.

In addition to joining marchers on Fifth Avenue, Navarro donned his Jesus drag for a series of announcements advocating safe sex and advertising the demonstration. In one vignette, Jesus sits against a wall, bathed in warm lighting. He implores his followers, “Make sure your second coming is a safe one. Use condoms.”

Another vignette starts again with a close-up of Navarro’s face. Jesus turns, deliberately, to address the viewer. “You may have been wondering where I’ve been the last couple thousand years,” Jesus explains: “Me and my friends at the AIDS Coalition to Unleash Power have been busy opposing the Church’s bastardization of my teachings.” At this point, the camera pulls back to reveal Navarro’s body. He wears a white robe draped over one shoulder, leaving the other exposed along with part of his chest. He holds up a Bible alongside a bookmark-sized ad for the “Stop the Church” protest.

“Have you seen a lot of these around town lately?” Jesus asks. “Have you wondered how they could have gone up in such a short space of time? Kind of a miracle, hmm? My hand’s been in it.”

“Personally, I oppose the Church’s position on abortion,” he insists, “and I’m busy fighting its murderous AIDS policy.”

What should we make of Ray Navarro’s Jesus drag—both as a form of public religion and as an example of religious conviction? Is this performance merely an instance of parody? Is he making fun of Jesus or claiming him for the side of those dying from AIDS?

Navarro’s camp conviction challenges the usual interpretive possibilities for thinking about politics and religion, especially by troubling any clear line between the religious and the secular or between sincerity and artifice. Camp is usually defined as a sensibility or style, one often attributed to gay male culture in the United States since the 1950s. Its richest sites range from theater and film, especially classics from the mid-twentieth century or plays on the classics—few could forget Faye Dunaway playing Joan Crawford screaming, “No wire hangers, ever!” in 1981’s Mommie Dearest—to drag performances staged nightly at gay clubs and on hit TV shows like RuPaul’s Drag Race. In her classic statement on the subject, Susan Sontag explains how camp “sees everything in quotation marks: It’s not a lamp but a ‘lamp’; not a woman but a ‘woman.’” Anthropologist Esther Newton offers three defining characteristics: “Incongruity is the subject matter of camp, theatricality its style, and humor its strategy.”

A number of writers describe camp as a tool of marginalized communities—a “strategy for a situation” or “a means of giving gay people a larger space in which to move, loosed from the restraints of dominant society.” Performance theorist José Esteban Muñoz broadens discussions of camp, usually attributed to middle-class, white gay male culture, to include lesbian and Latinx performance. Camp becomes a site of what he calls “disidentification” and can be “understood not only as a strategy of representation, but also a mode of enacting self against the pressures of a dominant culture’s identity-denying protocols.” Groups like ACT UP connected camp performance to queer politics in several powerful ways, one of which was to take up the Catholic Church itself as an object of camp engagement.

Catholicism and camp share a long history—an obsession with liturgy, aesthetics, and form. The homosocial spaces of Catholic tradition, from the all-male hierarchy to women’s convents, have long served as sites of sexual suspicion and aesthetic possibility. It is not for nothing that so many men happily trade the freedom of living as openly gay for the thrills of the clerical closet. Outside the formal Roman Catholic Church, drag activists like the Sisters of Perpetual Indulgence have, since the late 1970s, donned habits as they parade around gay ghettos blessing their patrons and teaching safe sex. Like “real” nuns, the seriously parodic Sisters, as Melissa Wilcox shows in a brilliant study, undergo a period of training and take vows, in this case, “to promulgate universal joy and expiate stigmatic guilt.” They have also been accused of anti-Catholicism. Like the work of the Sisters, Ray Navarro’s Jesus drag is threatening not simply because it is camp, but because it takes place outside the authority of the Catholic Church. It brings something of the sacramental to the people—and not just any people: to lesbians and gay men, feminists, and AIDS activists.

Camp is about making fun, subverting meaning, mocking authority—not things most modern Americans or scholars of religious studies would align with “religion.” But it also requires deep attachment, even intimacy, with the thing that becomes the object of camp. Navarro’s drag re-signifies Jesus in at least two ways. He reclaims Jesus from Christian conservatives but also resurrects Jesus for queer and feminist activists. In his performance, Jesus becomes a figure to play with as well as one to aspire toward, even to inhabit. Navarro’s Chicano AIDS activist Jesus thus becomes not only another representation of the Son of God, but also a performance that makes Jesus present as a feminist and queer activist.

Let me close with two points. First, at the risk of stating the obvious, the “Stop the Church” demonstration—and Ray Navarro’s Jesus drag, in particular—is not what conservative Christians have in mind when they say religion should have a greater place in the public square. Second, if my reading has been at all convincing, “Stop the Church” included some of the most spectacular images of religion in public in recent decades in the United States—not least, Jesus marching down Fifth Avenue to confront his oppressors.

Like many other works of queer art and performance that draw upon religious themes, Navarro’s Jesus raises questions about what we mean, and what our historical subjects mean, when we talk about the presence or absence of religion in the public or political sphere. Jesus camp suggests a style of religious conviction that is not propositional, sincere, obvious, conservative, formal, authoritarian, or traditional. Navarro’s Jesus refuses the authority of Catholic bishops to define the example of Jesus, not through a theological refutation but through a subversive inhabitation. By camping religious conviction, he performs the drag that has been there all along.

This piece is adapted from “Ray Navarro’s Jesus Camp, AIDS Activist Video, and the ‘New Anti-Catholicism,’” Journal of the American Academy of Religion.

Anthony Petro is an associate professor of religion and of women’s, gender, and sexuality studies at Boston University and a 2019-2020 member of the Institute for Advanced Study in Princeton, NJ. His teaching and research interests include religion and culture in the United States; religion, medicine, and public health; and gender and sexuality studies. His first book, After the Wrath of God: AIDS, Sexuality, and American Religion was published by Oxford University Press in 2015.