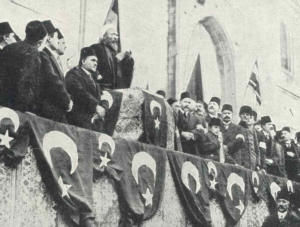 Does it matter if you are Muslim? Lately it seems to matter very much. By drawing our attention to the presumptions embedded in the term “Muslim,” Elizabeth Shakman Hurd’s essay and Cemil Aydın’s book aim to help us think our way out of Islamophobic patterns of thought. As both scholars point out, these patterns run deep across the ideological spectrum.

Aydın’s book takes up the history of the so-called “Muslim world,” a term widespread in casual usage by scholars as well as politicians, in order to reveal that what it names is a “myth,” an “illusion,” a purported unity that “does not exist.” By tracing its origins back to the second half of the nineteenth century, when he argues this myth first emerged, he hopes to give Muslims and their allies a conceptual tool with which “to liberate their political struggles from the prison of the imaginary geopolitical unities of the Muslim world and the West, which have been essential to ideologies that have excluded and racialized them.”

Hurd’s essay takes aim at an even more common and seemingly innocuous term. In her view, the term “Muslim country” is “sociologically sloppy, historically misguided, and politically dangerous,” because it fails to challenge the Islamophobic logic that implicitly licenses the state to draw religious distinctions. She argues that its use—whether by Donald Trump or the New York Times editorial board—is both factually and morally wrong.

At the heart of both arguments is the concern that contemporary political discourse accords an exceptional status to Islam as a totalizing ideology (as opposed to a mere religion), and to Muslims as a transnational body of believers united in their worldview and political aims. This presumed unity then becomes a cudgel to deny full recognition and rights to Muslims in the political communities to which they actually belong.

Both Hurd and Aydın write with scholarly rigor and moral clarity to make powerful arguments against ahistorical and essentialist notions of Islam. I appreciate their contributions as models of public scholarship committed to thinking our way toward a truly emancipatory politics. In that spirit, I want to share a concern raised for me in the course of reading both their works.

Hurd and Aydın are calling for us to abandon, or at least heavily ironize, our use of the terms “Muslim country” and “Muslim world,” on the grounds that they falsely ascribe a political homogeneity to individuals who identify as Muslims. In effect, they are insisting that “Muslim” is a religious identifier and not a political one. Hurd writes, “To assert that there can be Muslim countries and Muslim politics obscures the complex realities of human action and affiliation.” To my ear, omitting the term where it can reasonably be applied is itself a kind of obscuration. But the more troubling obscuration I detect in both their arguments is a will to diminish the historical and contemporary reality of Islam’s political resonance—not just for those who fear it, but for Muslims themselves, and for those of us who look to its ideals and practices for inspiration.

As Aydın’s book persuasively demonstrates, “The idea of the Muslim world is inseparable from the claim that Muslims constitute a race.” Modern Muslims’ various quests for political unity arose not out of any theological commitment to the notion of a global community of believers, but as a response to their colonization by non-Muslim powers. His book does particularly valuable work in tracing the impact of the global shift from one imperial system to another. In the old system, Islamic empires loomed large, and alliances were formed on the basis of strategic advantage rather than ethnic or religious solidarity. Yet over the course of the nineteenth century, a newly emergent racial consciousness challenged the stability of this system, while Islamic polities collapsed to make room for ostensibly secular European rule. When the Ottoman state was the last Islamic empire standing, it became the first focus of the nascent “Muslim world.”

Although Aydın insists that “the idea of a Muslim world could have emerged even without Ottoman leadership or a caliph in Istanbul,” the historically contingent fact of the matter is that Ottoman thinkers played an important role in helping to birth this idea. My own research on the Young Ottoman movement suggests that the concept of a “Muslim world” arose just a bit earlier than Aydın places it, among Ottomans living in Istanbul and abroad in the 1860s and 1870s—on the very cusp of the geopolitical shift he describes. This matters because the attitudes of these Young Ottoman thinkers were not yet locked into a narrative of ageless civilizational conflict between Islam and the West. Their goal was not to oppose Europe, but to balance it.

In an 1872 article entitled “The Unification of Islam,” Namık Kemal described the “civilizational achievements” of Britain and France as a “bolt of inspiration” to Muslims, whom he saw as stuck in a rut that would have embarrassed their forebears. Rather than fight the West, Namık Kemal wanted its help, just as the Ottomans themselves were positioned to help their less advanced coreligionists in other parts of the world. “[I]n a time of progress,” he wrote, “is not a more advanced race a big brother to a delayed one, on the principles of human brotherhood? If they are a big brother, are they not charged with helping their younger siblings to reach the age of greatness they have found?” For Namik Kemal, and for others, the invention of a “Muslim world” was a political strategy for fostering solidarity both within and beyond Muslim societies. It was a way of creating a stable civilizational identity to serve as a platform for participating in, rather than resisting, the new global order.

Namık Kemal’s rhetoric of Islamic unity prefigures the language of another nineteenth-century thinker, the young W. E. B. Du Bois, who in his 1903 book The Souls of Black Folk would write about “that vaster ideal that swims before the Negro people, the ideal of human brotherhood, gained through the unifying ideal of Race.” Like Namık Kemal, Du Bois would stress that the racial betterment he sought was “not in opposition to or contempt for other races.” Instead, it was founded on a vision of racial complementarity, an equality built on difference.

Such rhetoric has few champions among progressive thinkers today. The concept of racial complementarity, like that of racial essence, is now considered thoroughly retrograde. Du Bois began his own shift away from such essentialist notions soon after the publication of The Souls of Black Folk. In its place, he embraced a social constructivist model of race, informed by an appreciation of how material conditions shape our social destinies. Yet for all the radical materialism of his later years, Du Bois the twentieth-century thinker never turned his back on the social reality of blackness or the ideal of black solidarity. As students of Islam in history and politics, we might benefit from the insights of a century of critical race theory in our efforts to think how Muslimness functions as an identity without an essence, and how solidarity can exist in the face of heterogeneity.

Let us also bear in mind that Islam is not a race; it is a religion, a transcendent set of ideals and practices that aim at nothing less than transcending, and transforming, the world around it. The Muslim world may be a “myth,” in the sense that all worlds, all purported wholes, are myths; but it is an extraordinarily potent one that is no less real for being imagined. The unifying power of Islam that Aydın repeatedly calls “illusory” seems to me to be well documented as a historical phenomenon in his own book, in every instance of Muslims crossing boundaries to undertake political projects together. If there is no such thing as a global Islamic community, what do the members of the Global Queer Muslim Network think they are up to? Why do so many Muslims who routinely disregard most of Islam’s injunctions still send their zakat to help refugees from Iraq and Syria?

Islam today remains a powerful spur to collective social action. Aydın acknowledges as much when he affirms, in his conclusion, that Muslims “have the right to act on their internationalist and humanitarian visions to create a more just world,” in accordance with the “religious and spiritual traditions” that inspire them. To that I would only add that the expressly political nature of Islam’s ideals—its standards for the just distribution of power and goods, its protocols for collective decision-making and dispute resolution, its continually evolving set of practices for realizing divine justice on earth, and its ability to sanction the disruption of existing political structures in pursuit of that justice—are central to its power to inspire.

By denying the existence of “Muslim politics,” and dispelling any notion of an Islamic international, Hurd and Aydın hope to disrupt the logic of Islamophobia. I worry that what they propose comes close to mirroring that logic, by putting too little faith, as it were, in Islam as an asset to liberation struggles. Insofar as Islam, like all religions, furnishes a source of ideals that transcend individuals while affirming the dignity and worth of each, it is perpetually ripe with subversive potential. States have good reason to fear it, and our emancipatory political projects depend on it.

Madeleine Elfenbein is a PhD candidate in Near Eastern Languages and Civilizations at the University of Chicago. For 2017-2018, she is an Early Career Fellow at the Lichtenberg-Kolleg, the Göttingen Institute for Advanced Study in the Humanities and Social Sciences. Elfenbein was a recipient of a 2013 SSRC International Dissertation Research Fellowship. More information on her research can be found at maddyelfenbein.wordpress.com.