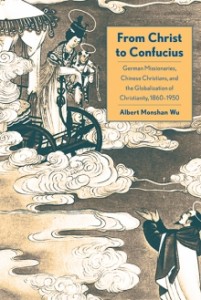 In 1924, the influential German missionary Carl Johannes Voskamp composed a series of lengthy reflections on the relationship between Christianity and culture in China, a land in which he had evangelized for decades. Christians, he wrote, would do well to learn the wisdom of Confucius—who for Voskamp signified Chinese philosophy and literature as a whole—and use it as the basis for forming a friendship and alliance with the Chinese people. While today such calls for intercultural amity appear unremarkable, this marked a dramatic reversal in Voskamp’s thinking. Two decades earlier he had lambasted Confucian thought as the source of China’s alleged passivity and corruption, which impaired the spread of Europe’s Christian and self-evidently universal civilization. As he scoffed in his 1902 book Confucius and China Today, “Western ideas inspire people to hope for the future, [while] Confucianism impels Chinese people to stare into the darkness of their past,” condemning them to a perpetual “angry anarchy.” Like almost all European missionaries at the time, Voskamp viewed China, with its vast population and territory, as a central battleground in the quest for the world’s evangelization. Yet his initial claim that Christianity’s triumph would be achieved by repressing Chinese culture had given way to a call for cooperation, pluralism, and tolerance.

According to Albert Monshan Wu, Voskamp’s conversion was far from an isolated anecdote. In his exciting and beautifully written book, From Christ to Confucius: German Missionaries, Chinese Christians, and the Globalization of Christianity, 1860-1950, Wu charts a fundamental shift in European missionaries’ conceptions of non-Europeans, from child-like barbarians in need of discipline to representatives of venerated civilizations worthy of respect. He meticulously reconstructs a century of missionary conferences, activities, and publications—both Catholic and Protestant—to demonstrate that German missionaries stood at the forefront of this transformation. Like almost all Europeans, Germans of the late nineteenth century were steeped in the call for a “civilizing mission,” and took for granted that their duty was to instill both the gospel and European social norms (especially monogamy) in “heathens” across the globe. However, the shock of World War I and Germany’s humiliating defeat induced German missionaries to develop a new understanding of their place in the world. After the Treaty of Versailles stripped Germany of its colonies, they reinvented themselves as opponents of Western imperialism, claiming that Christian missions should accommodate and even defend non-European cultures through actions like the preservation of local languages and rites. In Wu’s telling, this separation of Christianity from conceptions of “European civilization” became a model for other Europeans in the post-World War II era. After another war decimated Europe and its global power, British, French, and other European missionaries followed their German forbears and embraced a more pluralist approach to foreign religions and cultures.

Equally important, Wu argues that this shift stemmed not only from intra-European discussions, but also from encounters with Chinese Christians. Indeed, From Christ to Confucius refreshingly expands the panorama of most missionary studies to explore Chinese Christians and their tense relations with their self-proclaimed European leaders. These local believers, Wu shows, embraced Europeans’ ideas while routinely agitating for further autonomy (especially in running parishes and churches). The book’s most powerful chapter traces how influential Chinese Christians who grew up in missionary institutions, such as Ling Deyuan and Chen Yuan, harshly criticized their former European educators for their cultural imperialism. Taking their teachers’ nascent anti-imperialism one step further, individuals like Ling and Chen argued that Chinese Christianity needed to divorce itself from its European roots and subsequently supported the Communist regime’s 1951 expulsion of Western missionaries. Germans, to be sure, were never able to stomach such radical critiques. Even when they decried Western imperialism and praised Chinese culture, they continued to see themselves as more “advanced” than the local Christians, and regularly dragged their feet in granting them control over churches and schools. Nevertheless, Wu claims, such cross-cultural encounters left their mark on European Christianity. Slowly and painfully, they forced Europeans to think of Christianity not as a European possession to be exported, but as a truly global religion over which they exercised no unique authority.

While Wu’s narrative is brilliantly researched and argued, it is not always clear that its implications are as broad as he implies. For one thing, From Christ to Confucius maintains that it was German missionaries who initiated a process that would culminate in the 1960s, when both the Vatican and the Protestant World Council of Churches proclaimed that non-Christians could be blessed with salvation. This narrative posits a direct lineage between interwar German doubt about Christian and European superiority and the postwar embrace of a more pluralist and tolerant Christian outlook. Yet there is a difference between treating others as spiritual equals and a begrudging and tactical willingness to cooperate with them to fend off a greater evil. As Wu shows in detail, when missionaries like the director of the Berlin Mission Siegfried Knak talked about cooperating with Confucians in the 1930s, they were primarily motivated by the need to confront allegedly more alarming anti-Christian forces, such as Communism and Japanese imperialism. They continued to express intense suspicions toward other Asian religions, especially Buddhism. Equally important, Knak and others still adhered to strict hierarchical visions of “civilization.” Even when they claimed that Christianity could not justify European imperialism in China, German missionaries continued to assume that they were the “advanced” nation, the teachers of the “immature” Chinese. Chinese religion and culture, that is, was not elevated to the status of equal participant in inter-religious and intercultural dialogues. If Europeans embraced a more tolerant view of non-Western religions and societies in the 1960s (in itself a contested assertion), it was not as direct continuation of the Germans’ interwar writings, in which Chinese culture remained, at most, a strategic ally, a lesser evil to bear with until the major foe had been vanquished.

Furthermore, it is not altogether clear the extent to which Europeans’ self-reflections and re-assessments of Christianity truly emerged from engagement with Asians. Some of the book’s most stimulating passages show how desperate Chinese Christians were to communicate openly with their European supervisors. The Germans, by contrast, appear profoundly self-absorbed, constantly projecting on the Chinese their shifting anxieties about Christianity’s European enemies. As long as Christians felt confident that they would continue to dominate Europe, they showed consistent disdain for Confucianism. Their growing tolerance came only after a series of anti-Christian assaults at home—such as the 1919 separation of church and state in Germany and the rise of militant Communism throughout the continent—shook their complacency and led them to believe that Europe and Asia confronted similar dangers. Even then, Germans rarely went beyond very limited reforms, such as the appointment of a Chinese bishop in local parishes. Europeans, in short, did not seem particularly interested in actually listening to the Chinese, and, as Wu powerfully shows, stubbornly ignored most local complaints and pleas. Long after the Germans had lost their formal empire, their trans-cultural “dialogue” remained often one-sided.

These minor critiques shed some doubt on Wu’s boldest assertion, briefly outlined in the conclusion, that the shift in missionary ideology helped usher in a more secular Europe. Once theologians and Christian activists became receptive to the legitimacy of other religions, and “no longer preached the unchallenged supremacy of Christianity,” he claims they helped diminish Christianity’s authority in its historic center. While this proposition—that tolerance ironically weakened rather than strengthened Christianity—is intriguing, it does not fully comport with the historical timeline, at least as far as China is concerned. As a new wave of scholarship has shown, the collapse of the European missionary project following the Communist victory in China, which is the end of Wu’s story, coincided with the zenith of Christianity’s dominance in Europe. During the two decades after World War II, self-styled Christian parties rose to power almost everywhere, and Christian norms—especially regarding gender and the family—were hugely powerful. Like the missionaries overseas, European Christians at home consented to a more religiously pluralist order not out of humility and self-doubt, but out of a desire to pursue an urgent crusade against atheist Communism. This Christian mobilization did not diminish Christianity’s potency; if anything, it further added to it.

Wu’s fantastic study, then, casts a harsher light on Christianity and politics in the twentieth century than his story fully reveals. It not only uncovers a momentous ideological shift, a complex process of self-reflection, and the emergence of a new consciousness, but also highlights a long continuity within Christian thought of self-centered fixations, an obsession with perceived enemies, and a frantic quest for victory over others. Still, by any measure, From Christ to Confucius is an impressive achievement. Its interweaving of European, Asian, and religious history will serve as a model for anyone interested in Christianity’s global adventure.

Udi Greenberg is an associate professor of European history at Dartmouth College. His first book, The Weimar Century: German Émigrés and the Ideological Foundations of the Cold War (Princeton, 2014), was awarded the Council for European Studies’ prize for best book in the field 2014-2015. He is currently working on a book-length project that explores the transformation of Catholic-Protestant relations in Europe in the nineteenth and twentieth centuries, from animosity to cooperation.