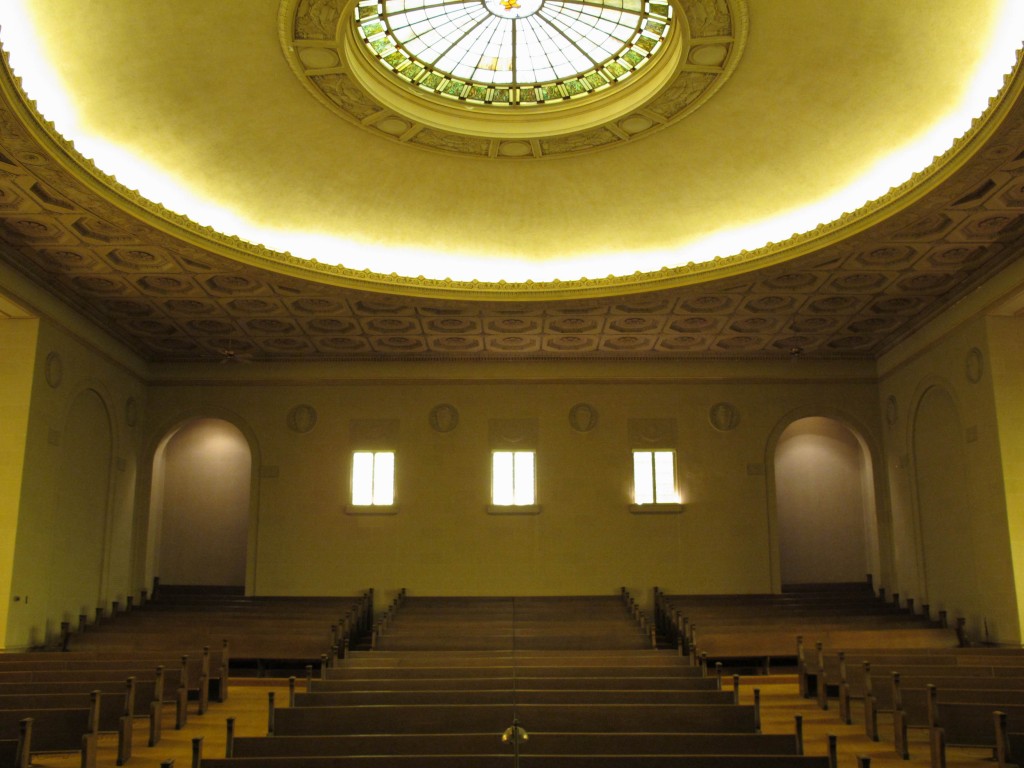 Every Sunday night in Omaha, Nebraska, a small group gathers in a United Church of Christ church lobby to watch and participate in a streaming video broadcast called Darkwood Brew. Both the project and the space—which has been transformed into a hip coffee shop—feel more of a piece with evangelical strategies to attract new members than with the trappings of Midwestern mainline Protestants. The crowd itself is relatively sparse, and much older than you might expect for such an experiment: a couple dozen people, most between 40 and 60 years of age.

I visited Countryside Community Church in fall 2011 as a Research Fellow for the New Media Project (housed at the Christian Theological Seminary in Indianapolis). Darkwood Brew was one of six case studies chosen for the first phase of the New Media Project’s research into how Christian communities in the United States are using, and theologically interpreting, new digital technologies. On its website, Darkwood Brew is described as “a groundbreaking interactive web television program and spiritual gathering that explores progressive/emerging Christian faith and values.” There is some debate among the participants themselves about whether or not the live stream counts as a church service; despite the fact that the weekly program features bible study, discussion, music, and concludes with the Christian rite of communion, most resist the language of “church” to describe what is happening.

This isn’t just nitpicking over semantics. Whether or not Darkwood Brew is “really church” gets to the heart of the community’s theology—how it understands God, the world, and the relation between them. It also highlights some of the tensions and pitfalls that come to the surface when religious communities adopt new technologies.

One of the most common pitfalls—and the one I’ve seen most frequently in my work with Christian communities for the New Media Project—is assuming that digital technologies are “merely” tools to be used for good or ill, depending on the intentions of the users. On this model, whether or not a pastor gets on Facebook, for example, is considered a question of time management or effective reach—Facebook is seen as merely another platform, akin to a church newsletter or email list, from which to reach the congregation with the authorized message. In reality, Facebook often changes the congregation’s perception of pastoral authority, opening much more profound questions about the meaning and practice of ordination, lay participation in theological interpretation, and the dissolution of the private/public personas of clergy.

Likewise, a community’s theological practices will influence the way they approach digital culture. Take, for example, the practice of concluding each Darkwood Brew program with the rite of communion. Anyone physically present in the recording space shares bread and wine. Anyone watching via live stream or re-broadcast is encouraged to grab whatever elements are at hand and join in (bread and wine, certainly, or Oreos and milk as one live streamer confessed). The pastor prays over the act, authorizing it in some way even for those not physically present, and it is clear that Countryside Community Church considers this “real communion.” But to call it such assumes many deep theological premises: the physical elements (of bread, wine, Oreo, or milk) are not significant in and of themselves; the intentions of the receiver matter more than those of the pastor, etc. Many of these assumptions would be rejected by other Christian denominations that place more emphasis on the physical substance of sacramental rites or on the physical presence of the clergy in authorizing those rites.

The communion might be real, but most members of Countryside did not consider Darkwood Brew “real church” or a “real congregation” because, as one long-term member and program leader told me, “church are the people I see on Sunday morning who will make you casseroles when you are sick or watch out for your kids.” This response about the nature of church as physical presence and the meaning and limits of community opens a whole other can of theological worms.

Of course, the tricky thing about new media technologies is precisely the lack of centralized control over the “meaning” of the practices they generate. Viewers joining the online program might very well think of their own participation as “church” regardless of what Countryside intends. This is where understanding the digital practices of religious communities gets interesting.

Theological and technological assumptions, often unexamined, get smuggled into practices that take on lives of their own. Of course, digital and religious practices do not require the “right interpretation” to be valid or significant. Still, it is worth unpacking assumptions about what religion is and how it works, and about what digital technologies are and how they work, as we navigate this new terrain. It is worth unpacking these assumption, if for no other reason than that it turns out that people who study religion academically, or journalistically, often smuggle in their own unexamined assumptions about the intersection of “religion” and “digital culture.”

We can see this at work in some of the most commonly interrogated themes in the academic study of religion: authority, authenticity, agency, and presence. Scholars of religion have debated for decades what each of these terms means and what light they shed on the domain of human thought and practice that is typically classified as “religion.” Indeed, interrogating these terms can often help to highlight just how arbitrary the very classification “religion” is. At the intersection of face-to-face and digitally mediated practices and spaces, each of these terms are re-negotiated, transformed, or reinforced, sometimes surprisingly and sometimes predictably, but always in a way that helps us see the assumptions we bring to the table.

Take, for example, the case of religious authority in a digital age. There is a common assumption that digital technology will undermine traditional ways religious authority is accrued, maintained, and perpetuated. Why believe your pastor when you can read a hundred opinions—or write your own! The Pope’s tweets may generate media buzz but ultimately weaken his singular authority as his voice becomes just one more buried in my crowded feed.

In practice, however, the intersection of digital technology with religious practice might work to reinforce, rather than undermine, religious authority in new ways. In another case study from the New Media Project, a small Lutheran church in Denver comprised of self-professed “tech junkies” uses new media to negotiate all aspects of community life, from scheduling hymn sings on MeetUp.com to using Google docs as a digital prayer chain. The use of new media is an explicit strategy to transfer spiritual authority from the pastor to her newly empowered laity. At the same time, however, these dispersed practices reinforce the pastor’s singularity during face-to-face sacramental ritual, which is especially emphasized in the congregation.

In the early Internet age, which was predominately text based (e.g. chat rooms and message boards), the great promise was a bodiless flow of information from one digital subject to the next. In this context, it made sense to worry about how our understandings of ritual authenticity, agency, and sacred space would be transformed by these disembodied domains. In the great flow of information, would physical ritual matter at all? Think, however, of augmented reality software and wearable network devices: virtual technologies that are quickly developing the ability to tap into the full human sensorium and further diminish the thin membrane between embodied and virtual experience. With the right device could I come to “feel” the water in a baptismal ritual even if I were 200 miles away?

How do we parse agency or the quest for authenticity with the rise of user-generated online content? On the one hand, we are all “produsers” now—able to manufacture our own content for worldwide consumption. Doesn’t this imply that personal agency is predominating over communal identity? Or that my true self is created in the conglomeration of digital practices I manage? On the other hand, you can post (almost) anything you want on YouTube, but you cannot create YouTube’s infrastructure without considerable technical skill. As phone apps strive to be “intuitive” and “frictionless” (the big buzz words of Silicon valley), they also encourage homogeneity of content and style. In the early wars for social network dominance, for example, MySpace, which allowed for extensive user control over visual presentation, lost to Facebook, which allows for none.

Digital practices are, undoubtedly, altering domains of human life that are assumed to matter most for the practice of religion: how authority is created and maintained; the validity or possibility of authentic experience; the importance (or lack thereof) of physical presence for ritual. But what these practices “mean” or how they will show up in our own study is harder to predict without falling into eschatological hopes about the unlimited potential of digital technology or apocalyptic fears about the way the digital will unmoor all that is holy.

We need more scholars devoted to mapping this pervasively networked, digitally mediated landscape and the variety of religious practices it holds. We also need more interpretative and theoretical frames to make sense of these practices, not least of all because “digital religion” is not just the purview of a few new media scholars, but is, as I’ve suggested above, a frame for broader questions we might want to ask as a discipline. Engaging these questions is also germane because it is not just religious subjects that move fluidly between digitally mediated and face-to-face interactions. As scholars (and as human beings) we also navigate digital culture. Our next step forward may be more devoted attention to the possibilities of embracing and interrogating our own presence there.

Kathryn Reklis is Assistant Professor of Modern Protestant Theology at Fordham University in New York City. She holds a PhD in religious studies from Yale University. Her first book, Theology and the Kinesthetic Imagination: Jonathan Edwards and the Making of Modernity (Oxford University Press, 2014), explores the intersection of theology and performance studies to investigate the role of the body, desire, and beauty as sources for theological knowledge in the making of modernity. She is the co-founder of The Moth Chase, a blog on pop culture, gender, and religion and a regular contributor to the "On Media" column at The Christian Century. She is also a Research Fellow for the New Media Project at the Christian Theological Seminary in Indianapolis and Co-Director of the Institute for Art, Religion, and Social Justice at Union Theological Seminary, where she served as Director of Theological Initiatives and Senior Adviser to the President from 2008-2011.