Mourning a political saint in Johannesburg 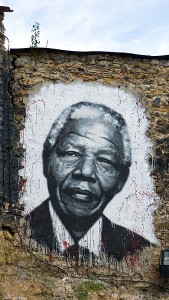 On December 6, 2013, I, along with millions of South Africans, woke to the news that Nelson Mandela had died. For the next ten days, South Africans would be plunged into a liminal period of commemoration: one marked by scenes of celebration, protest, and jubilation rather than tears and lament. As a white North American, conducting field research for my dissertation, this proved an incredible time of reflection. In what follows, I offer some snapshots of how Mandela was memorialized in Johannesburg and what this reveals about the current religious, political, and racial landscape.

A friend remarked on Facebook that she always thought when Mandela died the whole world would stop and weep for days. Instead, life went on. The reaction in South Africa was largely muted —no weeping, no wailing, just a sense of relief that at last their beloved icon was no longer suffering. For the past year, the country had been preparing itself for this moment. So when the news finally broke, people largely went about their business. But by the end of the day, things started to shift. Hundreds of people began to make spontaneous pilgrimages to the home where Mandela died in Houghton, a wealthy suburban neighborhood in Johannesburg, and to Mandela’s former home in the historic black township of Soweto, which has now been turned into a museum. A third memorial site emerged in the wealthy suburb of Sandton at Nelson Mandela Square. Known as the “richest mile in Africa,” Sandton is an economic powerhouse. Bolstered by “white flight” from Johannesburg starting in the 1980s, and the relocation of the Johannesburg Stock Exchange in the late 1990s, Sandton is a symbol of South Africa’s “world-class” market competitiveness. Its gleaming sky scrapers and luxurious malls face the skyline of a dilapidated, though vibrant, city center.

The differences between these sites could not have been starker. Taken together, they illuminate much about the multiple and conflicting legacies of Madiba. Mourners could choose which Mandela they were going to celebrate: Mandela the struggle hero and freedom fighter; Mandela the icon of reconciliation; or Mandela the economic savior. On Vilakazi Street in Soweto, the focus was not so much on the man, but on a larger political struggle. While international tourists regularly visit Soweto, during the Mandela mourning period, it was the locals who flocked there to bring flowers, to sign posters, but more importantly to drink, dance, and sing. In particular, the singing of protest songs by younger black South Africans became a way to express pride and hopes for a better future, an alcohol-fueled tribute to the promise of black political power in a local context still plagued by mass poverty and unemployment. 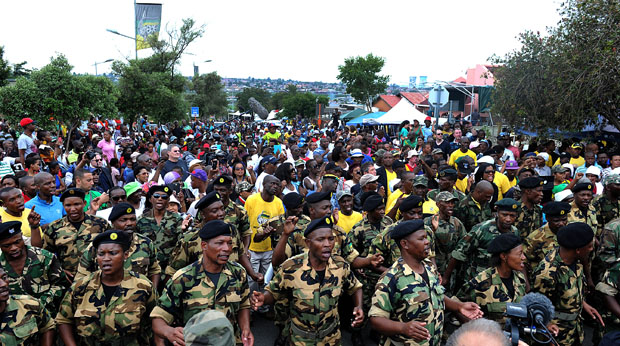 In Houghton, the crowd was much more racially diverse and predominantly middle-class. Also visible were Muslim, Hindu, and Jewish South Africans. Here, perhaps more than any other site, St. Mandela was honored. Parents accompanied their children as they laid flowers and wrote notes to Madiba, thanking him for the gift of reconciliation, forgiveness, and peace. A massive wall of flowers, notes, and candles sprawled anarchically into the street.

Though visitors near the wall were somber, the deafening sound of struggle songs and the constant flash of cameras created a festive mood. Hawkers also descended, quickly finding a way to brand anything and everything with Mandela. 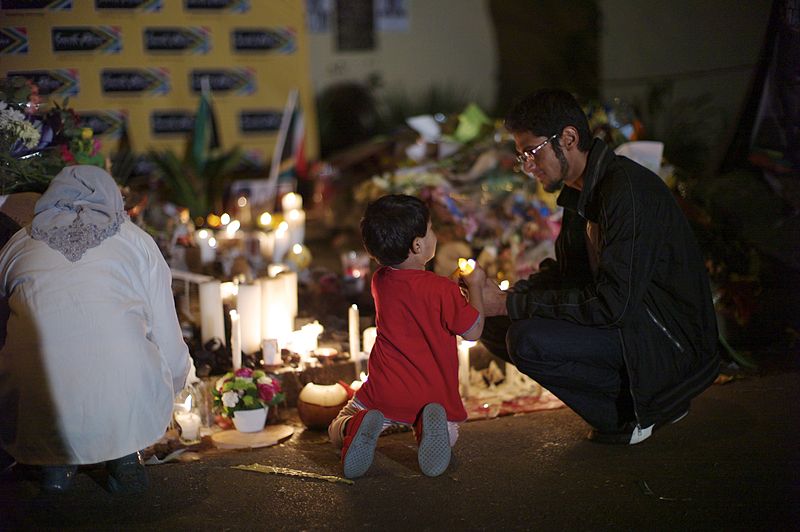 In Sandton, at Nelson Mandela Square, the tone was completely different. The square, adjacent to two luxury shopping malls, is lined with upscale eateries. At one end, stands an imposing 20 foot bronze statue of Nelson Mandela: a visible reminder that the first democratically elected president traded protection of white wealth in return for black political enfranchisement. At this memorial site, everything was neat, ordered, and efficient. No music, no dancing, no alcohol, no hawkers. Uniformed personnel directed the well-dressed multi-racial crowd to a roped off memorial area. 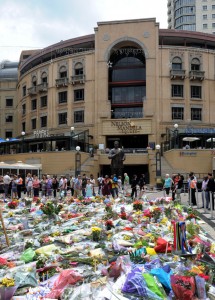 Perhaps because the environment was so controlled, one black woman stood out to me. Wearing a bright wig of South African colors, she had her own message to offer on a hand-painted sign: Mandela, 2nd Jesus Christ.

Much has been said about the “official” memorial service at FNB stadium in Johannesburg, where current South African president Jacob Zuma was unceremoniously booed. Less commented on was the Day of Prayer and Reflection called by President Zuma the previous Sunday. Churches, temples, mosques, and synagogues were encouraged to celebrate Mandela on Dec. 8. The choice of Sunday, rather than a weekend of reflection, points to the dominance of Christianity in South Africa despite religious pluralism and a secular state. The church I attended is a well-known charismatic mega-church in suburban Johannesburg, which sees itself at the forefront of a religious revival in Africa. This church is predominantly black, while its leadership is almost exclusively white. It appeals to upwardly mobile African immigrants and black South Africans, as well as white South Africans who want a sense that they are worshiping in a “Rainbow Nation.”

I was curious to see how this congregation, which views itself on a mission to bring South Africa “back” to God, would choose to mark Mandela’s death. This is a church that seamlessly blends eschatological language of building “God’s Kingdom” with the political rhetoric of nation building. Twenty years after the formal end of apartheid, the idea of creating a new nation still resonates deeply with many. Within this context, Mandela often emerges as the “saint of political miracles” who secured peace and economic prosperity. In charismatic mega-churches, especially, wealth creation is vigorously embraced. Personal wealth is considered the means through which God intends to bless the poor and marginalized: a divine trickle-down plan that mirrors the neo-liberal economic policies adopted by the African National Congress. Thus, as the worship band launched into the national anthem, the congregation responded with visible and heightened emotion. Several black congregants raised their fists in the air —a defiant symbol of the black struggle for liberation and the power of the people. After the national anthem, a carefully orchestrated multiracial group of leaders took a moment to “honour the gift the Lord has given to the nation” through prayer. They also jubilantly reported that Mandela died a “believer,” giving congregants full permission to embrace the fallen hero as a divine agent.

Prior to Mandela’s death, it was not unusual to hear white North Americans worry about what would happen in South Africa when Mandela died. I suspect some of these racial fears are influenced by those white South Africans who remain pessimistic about shifts in power relations. Yet, the lack of panic reported in the wake of Mandela’s death convinced me that a sizable number of white South Africans increasingly feel secure about their social position. Many black middle-class urbanites are also relatively optimistic, an attitude reinforced by the lyrics of a song sung at the church I attended: “South Africa belongs to Jesus.” They believe that South Africa has an important global role to play and that the future is one of prosperity.

On the other hand, most South Africans confess that the country is far from achieving Mandela’s vision, even if they disagree as to the reasons why. Today, South Africa is marked less by unity and a common vision than by a sense of polarization and contestation. The current president Jacob Zuma, in comparison with Mandela, is viewed as a national sinner—besieged by allegations of corruption and sexual assault. Many worry that extreme social inequalities (which are still indexed by race) remain too complex for Mandela’s vision of forgiveness and inclusion to solve. Thus, it is no surprise that what seemed to be really mourned at the grassroots, in places like Soweto, was the notion of struggle itself. The project of black liberation has yet to be fully realized.

Nevertheless, Mandela’s death provided something rare: a multiplicity of opportunities for South Africans, who are so often divided by race and class, to unite around a common cultural symbol (Mandela) and participate in “grey” zones. The memorial sites, and the figure of Mandela himself, offered momentary freedom from ordinary social constraints and renewed hope for a more just and non-racial society. A deep longing to embody the values and ideals associated with Mandela, even if these values are understood differently, was exemplified by the thousands who visited the sites. These memorials provided much needed space to reflect, but more than that, they offered an alternate social experience. The non-stop struggle songs sung from morning to night in Soweto and in Houghton, the passionate singing of the national anthem in the middle of a church service, proves that the revolutionary spirit did not die with Mandela. His mythic legacy will live on because the majority of South Africans will remember Mandela as a freedom fighter who was willing to suffer and die for his beliefs. Despite Mandela’s claim that “I am not a saint, unless you think of a saint as a sinner who keeps on trying,” the pilgrimages made in Johannesburg, and across South Africa, suggest that the public felt otherwise.