Religious Pluralism and Islamic Law: Dhimmis and Others in the Empire of Law 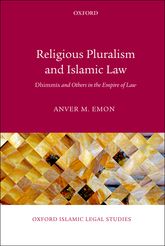 In his new book, Religious Pluralism and Islamic Law, Anver Emon discusses Islamic legal doctrines and their implications for religious diversity and tolerance in Islamic lands:

This book problematizes tolerance as a conceptually helpful or coherent concept for understanding the significance of the dhimmī rules, the Islamic legal doctrines that governed and regulated non-Muslim permanent residents in Islamic lands. In doing so, it suggests that the Islamic legal treatment of non-Muslims is symptomatic of the more general challenge of governing a diverse polity. Far from being constitutive of an Islamic ethos, the dhimmī rules are symptomatic of the messy business of ordering and regulating a diverse society. This understanding of the dhimmī rules allows us to view the dhimmī rules in the larger context of law and pluralism, and in that fashion, creates new spaces for analyzing Sharīʿa as one among many legal systems that, far from being unique, suffers similar challenges as other legal systems that also contend with the challenges of governing amidst diversity.