Light without Fire: The Making of America’s First Muslim College 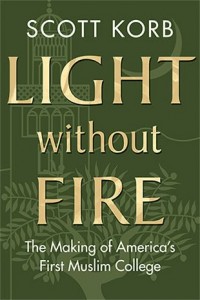 Scott Korb, who teaches at the New School and New York University, recently published a book, Light without Fire: The Making of America’s First Muslim College, that describes the founding of Zaytuna College in Berkeley, California. Founded by Muslim scholars, Zaytuna College is America’s first residential, liberal arts college with the mission to educate professional, spiritual, and intellectual leaders in Islamic scholarly tradition. From the publisher:

In the fall of 2010, anti-Muslim furor in the United States reached a breaking point, capping a decade in which such sentiment had surged. Loud, angry crowds gathered near New York’s Ground Zero to protest plans to build an Islamic cultural center, while a small-time Florida minister appeared on national television almost nightly promising to celebrate the anniversary of 9/11 with the burning of Korans. At the same time, fifteen devout Muslims quietly gathered in a basement in Berkeley, California, to execute a plan that had been coming together for over a decade: to found Zaytuna College, “Where Islam Meets America.” It would be the nation’s first four-year Muslim liberal arts college, its mission to establish a thoroughly American, academically rigorous, and traditional indigenous Islam.

In Light without Fire, Scott Korb tells the story of the school’s founders, Sheikh Hamza Yusuf and Imam Zaid Shakir, arguably the two most influential leaders in American Islam, “rock stars” who, tellingly, are little known outside their community. Korb also introduces us to Zaytuna’s students, young American Muslims of all stripes who admire—indeed, love—their teachers in ways college students typically don’t and whose stories, told for the first time, signal the future of Islam in this country.

From a heady theology classroom to a vibrant storefront mosque, from the run-down streets Oakland to grand ballrooms echoing with America’s most powerful Muslim voices, Korb follows Zaytuna’s students and teachers as they find their place and their voice. He ultimately creates an intimate portrait of the school and provides a new introduction to Islam as it is being lived and re-envisioned in America. It’s no exaggeration to say that here, at Zaytuna, are tomorrow’s Muslim leaders.

Find more information about the book here. A full excerpt from the book can be found at Religion & Politics. Also, read an interview with the author as well as a review of the book in The New Yorker.