The following is excerpted from a chapter in The Post-Secular in Question: Religion in Contemporary Society, a joint publication of the Social Science Research Council and New York University Press.—Ed. 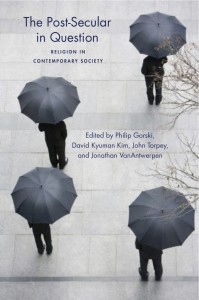 It was, then, a stirring sight to see Habermas sit down with Cardinal Ratzinger in 2004 for a philosophical dialogue. It is hard not to miss a breath at the image of both men in conversation, one the arch-defender of reason and rationality, described by Habermasian scholar Thomas McCarthy as the “last great rationalist,” and the other, renowned as Prefect of the Congregation for the Doctrine of the Faith (and subsequently as Pope Benedict XVI), for his steadfast theological defense of Catholic tradition and moral teaching. At the same time, the twinning of the two Germans made for a fitting tableau: through their long careers, both have shown little interest in sociological realities and have remained intellectually aloof from lived experience.

It was, in any case, an interesting conversation. Among other points, Habermas noted that the Enlightenment project of modernization had gone somewhat awry, has become derailed. In particular, as he had previously elaborated, he noted that globalizing economic markets defy the control of consensual rational judgments, and he lamented not only the extent of global socioeconomic inequality but the mass political indifference toward it. This indifference is part of a longer depoliticization process resulting from modernization and increased affluence and consumerism, highlighted by Habermas decades earlier. For Habermas, the threat posed by current globalizing forces to potentially “degrade the capacity for democratic self-steering,” both within and across nations, makes the need for public communicative reasoning all the more necessary. He thus looks to discover new (i.e., underappreciated) political cultural resources for the democratic revitalization project. Hence, “a contrite modernity,” one characterized by several social pathologies that need fixing, may benefit, Habermas argued, from religious-derived norms and ethical intuitions. He conceded that these religious resources can help human society deal with “a miscarried life, social pathologies, the failures of individual life projects, and the deformation of misarranged existential relationships.”

Many sociologists have elaborated on the perils of globalization and the increased polarization between classes and regions as the profit logic of capitalist markets inexorably trumps normative considerations. Yet only Habermas looks to the religious domain rather than pushing for attentiveness to a rearticulated political ideology of, for example, global social democracy, as a way of reorienting societal thinking about modern socioeconomic pathologies. In his view, “The translation of the likeness of the human to the image of the divine into the equal and absolutely respected dignity of all human beings” offers a way of using religious values to reorient society’s values toward principles of economic and social justice. Clearly, Habermas’s new affirmation of the relevance that religious ideas and ethics have for contemporary political debate marks a major transformation in his thinking. I very much welcome this more inclusive view of religion as a potentially emancipatory political and cultural resource, a resource that can open up and enhance rather than retard public discourse, and energize the creation of more deliberative and more participative social institutions.

Habermas’s view of religion’s potential as a remedial cultural resource for contemporary societal ills is shared by many religious leaders. For example, more than one hundred diverse religious leaders meeting in Rome in June 2009 ahead of the G8 summit collectively affirmed the urgent need for political leaders to recognize the relevance that religious ideas and moral values have in shaping the social fabric. They strongly emphasized that economic and political decisions, devoid of awareness of their moral consequences, cannot serve the common good. These themes are further elaborated in Pope Benedict’s encyclical Caritas in Veritate (Charity in Truth) and are in line with a long tradition of Catholic social teaching originating in the late nineteenth century, through which Catholic leaders, drawing on natural law reasoning, have cautioned against industrial policies that marginalize workers and ignore the needs of the economically downtrodden.

Habermas’s new regard for religion, articulated across several venues since 2001, leads him to embrace the term “post-secular society” in order to demarcate the current moment. He is not the only one to use this language, and there has been a tremendous amount of hairsplitting over what exactly the term means and how it is related to the secular, secularization, secularism, secularistic, and post-secularism. The gain in popularity of post-secular terminology comes in the wake of the postmodern, the postcolonial, and the post-national. Many scholars would concur that there really is something qualitatively different about the post-1970s era, enough to warrant a new term that differentiates the modern era (roughly defined as the period encompassing 1770–1970) from the postmodern. As David Harvey has argued, “There has been a sea-change in cultural as well as in political-economic practices since around 1972. This sea-change is bound up with the emergence of new dominant ways in which we experience space and time” and has produced what he refers to as “the condition of postmodernity.” Similarly, the post-national captures the changing legal and political status of the nation-state in the context of the rise of transnational or supranational entities (e.g., the European Union), and the postcolonial offers a dynamic way of rethinking the cultural agency, transformative identities, and differentiated histories of previously colonized peoples.

It is not compellingly evident that the term “post-secular” is newly warranted. After all, sociologists still have a hard time conceptualizing and especially measuring secularization, something that is surely related to the secular. By extension, it is challenging to assess whether or not secularization has in fact occurred given that there is so much differentiated evidence for and against its sociological reality; even the most secular societies, such as the United Kingdom, still have, for example, public rituals affirming the symbolic and cultural influence of religion on government. If we are unsure about the secular, it may be intellectually premature to talk about the post-secular (although it is certainly a stimulating way to change the conversation).

Yet it makes sense for Habermas—as Habermas, and with his Habermasian worldview—to construe a post-secular society. His understanding of progressive societal evolution and his deep intellectual commitment to the triumph of reasoned argumentation—to communicative action rather than strategic action—suggest that he has long construed the West as essentially secular since the Enlightenment. But now that, as he states, the Enlightenment project has been partially derailed and reason subsumed by strategic market interests and political indifference, it is appropriate for him to rethink the secular. Hence, in my reading of Habermas, the post-secular provides him with a useful analytical device for acknowledging not so much the persistence of religion as the partial failure (derailing) of the Enlightenment, a failure that by default brings religion back and into the secular. The post-secular denotes that the secular, like the Enlightenment, fell short of its originally intended destination. It is not that secularization has not occurred; it is just that there are some complications that the persistence of religion has thrown on its tracks. Overall, Habermas is clear that, despite his recognition of religion’s continuing relevance, “the data collected globally still provide surprisingly robust support for the defenders of the secularization thesis.”

There is some ambiguity in Habermas’s use of post-secular language. He argues that the term “post-secular society” applies only to those affluent societies “where people’s religious ties have steadily or rather quite dramatically lapsed” since the mid-twentieth century. In this designation, he includes European countries and Canada, Australia, and New Zealand. Yet Habermas also argues (in the same passage) that even in Europe, “sociological indicators…of [the] religious behavior and convictions of the local populations” have not changed so dramatically as to “justify labeling these societies post-secular” despite their trends toward deinstitutionalized religion. The confusion with Habermas’s definition emerges because while he talks about “post-secular society,” it seems he really intends to talk about a post-secular Zeitgeist, “a change in consciousness.” Thus, he subsequently clarifies, “Today, public consciousness in Europe can be described in terms of a post-secular society to the extent that at present it still has to adjust itself to the continued existence of religious communities in an increasingly secularized environment.” Driving this post-secular consciousness, Habermas argues, is the resurgence of religion in Europe, evidenced by the increased participation of churches in public policy debates in some “secular societies” and the increased visibility of religion in local immigrant communities (principally Muslim) as well as religion’s increased global presence, especially manifested through various fundamentalist movements. In short, for Habermas, the term “post-secular” can be applied to secularized societies in which “religion maintains a public influence and relevance, while the secularistic certainty that religion will disappear worldwide in the course of modernization is losing ground.”

Because the “post-secular” recognizes the public relevance of religion and of religious ideas in informing civic discourse, I would argue that it is applicable to the United States, notwithstanding differences in U.S. secularism compared to that of Europe or Canada. Although religion has maintained a relatively steady and exceptionally strong hold for Americans, churchgoing Americans typically show a highly autonomous (virtually secular) attitude toward religious obligations and church teachings and, like their affluent peers in Europe and Canada, for example, presume to live in a secular society. Thus, while their religious ties have not necessarily lapsed, they make their own choices about how and when to be religious; their religious beliefs and practices are determined largely by their own authority (acting as modern, self-oriented individuals) than by the coercive power of an external religious authority. Moreover, the United States is secular in that it is a constitutional republic with a strict separation of church and state, and public consciousness of this separation dominates legal opinion and legislative and policy debates notwithstanding the visibility of religion in politics and public culture. In my view, the term “post-secular” is more theoretically robust if we can use it to help us understand the more general relevance of religion as a public cultural resource in all modern democratic societies regardless of their varying degrees or levels of secularism and secularization.

Michele Dillon is Class of 1944 professor of sociology at the University of New Hampshire. Her most recent book is Postsecular Catholicism: Relevance and Renewal (Oxford University Press, 2018).