“In God We Teach” 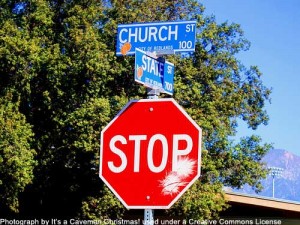 ilmmaker Vic Losick recently released “In God We Teach,” a documentary about a public high school student who surreptitiously recorded a lecture given by his history teacher and accused him of Christian proselytizing:

“He did everything in his power to make sure that you could go to heaven, so much so that he took your sins on his own body, suffered your pains for you, and he’s saying, ‘Please, accept me, believe.’ If you reject that, you belong in hell.”

“In God We Teach” is the story of Matthew LaClair, a student at Kearny (NJ) public high school who secretly recorded this statement (and others) made in class by David Paszkiewicz, his history teacher.

After approaching the local school board for redress and receiving none LaClair took his secret recordings to the media, accusing Paszkiewicz of illegally proselytizing for Jesus in the classroom. When these recordings were made public, the story exploded, engulfing not just Kearny, but rippling across America as well.

Paszkiewicz, defending himself in a letter to the local newspaper, The Observer, claimed that he was just exercising academic freedom, and expressing his opinions in response to students’ questions (questions he claimed that were asked primarily by LaClair.) In addition, he cited several Founding Fathers’ quotations as justification for his own statements. Otherwise he remained silent…that is, until his appearance here, in this in-depth documentary, “In God We Teach.”

LaClair, on the other hand, became a media and First Amendment darling; giving many interviews and receiving multiple awards, while receiving a less-than-enthusiastic reception from his fellow students and citizens, including a death threat. It was clear that the residents of Kearny seemed to support Paszkiewicz regardless of whether he “crossed the line” or not.

While the average American is familiar with the concept of “separation of church and state,” just how many understand what is legal and what is not when it comes to the public school classroom? What are the rules? Who can say what? Does God’s law trump civil law? “In God We Teach” explores the blurred lines between personal belief, religious dogma and civil law through the eyes of an average, blue-collar American town.

In today’s polarized world, discourse can be strident and discussion difficult. “In God We Teach,” however, endeavors to be even-handed, non-hysterical, and yes, even adult in its tone and aspirations. While both Matthew LaClair and David Paszkiewicz present their views in an interesting and entertaining manner, it is not always comfortable viewing. When the dinner table taboos of politics and religion collide in small-town America, the shockwaves reverberate nationwide.