Looking at religiosity and the Bible Belt

Richard Florida follows up on what exactly a recent Gallup poll on differences in religiosity by state tells us about America. He compares the poll’s findings with his own socioeconomic data, which confirms correlations identified by the longstanding World Values Survey: 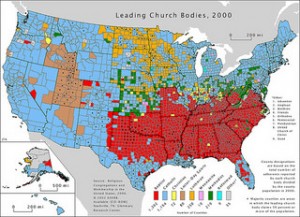 Gallup notes the relationship between religious intensity and American voting patterns, with the most religious states generally skewing Republican and the least religious trending Democrat. Our own analysis bears this out. We found a substantial positive correlation between religiosity and the percent of state residents that voted for McCain (.67) and consider themselves conservative (.78), and a substantial negative one between religiosity and the percent of residents who voted for Obama (-.64) and consider themselves liberal (-.75)….

Politicos on the left and right like to explain religious voters’ proclivity purely in terms of values. But this misses a central point – that religion is inextricably bound up with the nation’s underlying economic and geographic class divide.

See the rest of the story at The Atlantic: Cities.