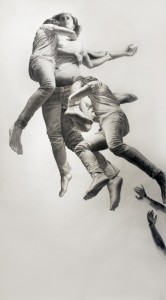 Reading the entries posted at Frequencies, an online project that alleges to be “a collaborative genealogy of spirituality,” brings out the bitchy side of my temperament.

When Thomas Tweed asks, “Is ‘spirituality’ a noun? A verb? Something else?,” I want to send him a pocket dictionary that he can consult in future moments of linguistic crisis, so that he does not produce overwrought prose that only calls attention to himself. (Confidential to TT: it’s a noun.)

When David Kyuman Kim writes, “My iPhone has saved my life. My iPhone is stealing my soul,” I guffaw at the hyperbole. (Does Kim’s iPhone double as a defibrillator?)  And I am bemused by Kim’s authorial voice. It is not novel to point out, as Kim did and should have done, that technology places the satisfaction of an ego’s desires for the world front and center; there is no magic in the iPhone that was not already implicit in Alexander Graham Bell’s “Mr. Watson come here.” But negotiating that egocentrism by compounding it—by writing about one’s own ambivalence about one’s egotism—is quite the feat.

When Thomas Csordas lionizes Blake for his love of “the slumbering creative potential of humanity as a whole,” I want to ask him how the [expletive deleted] he knows that humanity as a whole is creative and not dysfunctional. What are the grounds of his confidence? Why should I share it? If humanity were to see itself as a whole, is it really the case that no one would feel as if her or his singularity had been silenced? Isn’t “humanity as a whole” simply an imposition of Csordas’s own desire onto billions of others? Bah!

In the last post put up at the website, dating from mid-January 2012, Nancy Levene pointed out that the list of topics provided to contributors could rightly extend from what the curators suggest out to infinity; the series of stuttering J’s that make up a long series in the middle of the list (“Jarena John John John Johnny Joseph”) could go on and on. But the first hundred entries are not best figured by “JJJJJJ,” but by the self-referential “IIIIII.”

The authors have done nothing blameworthy. They have only done what the curators of the Frequencies project, Kathryn Lofton and John Modern, have asked them to do. (“What comes to mind when you think of spirituality?” can only be a question about what comes to the authors’ own minds.) Moreover, the curators had good reason to make that request, because of their interest in doing a genealogy of spirituality.

When Michel Foucault articulated his genealogical project in “Nietzsche, Genealogy, History” over forty years ago, the object of his critique was a metaphysical notion of truth, in which terms were seen as having ahistorical essences. The task of the historian, if she is to be truly a historian, is to show that terms, and the social processes that invoke them, can alter over time, and can be contested with no side in the contest necessarily being in the wrong. What the genealogist discovers “at the historical beginning of things is not the inviolable identity of their origin; it is the dissension of other things. It is disparity.“ To call for a genealogy is to call for individuals to dissent, to talk about echoes of spirituality where they are not always expected in our culture—in iPhones, on the floor of a John Cage performance, on a highway, in a cup of coffee, in blood. This is what most of the contributors have done. However, to call for a genealogy is also to call for individuals to dissent from each other, to contest people’s claims that they have truly found the spirit in any of these places. (Otherwise, the scholars participating in the Frequencies project simply do old-style history with a new lingo, by replacing an objective account of spirituality with a group of subjects’ spirituality-stories in which all the stories are taken as having the same objective adequacy and value.) Disparity must be produced by the reader of all of these dissenting stories, in the critique—and perhaps ridicule—of the testimonies that have been collected. For this reason, genealogy must be collaborative. There is no critique without an object. Some position must be unjustified; some argument must be malformed. Someone will get the short end of the stick, and so the critic will always be a bitch who makes someone else his or her bitch.

Nevertheless, Frequencies need not depend upon this two-stage process, in which scholars opine and then subject themselves to dissent. The goal of genealogy, for Foucault, was to confirm “our existence…without a landmark or a point of reference.” If Lofton and Modern are calling for a field to take form—for genealogists to come together as genealogists—then those people should not only dissent from the past, but also self-consciously write about spirituality as if there were no reference point in it. This means not writing in the indicative, as if “the highway is a space of potential” were a factual claim. Instead, it means writing in the subjunctive, claiming that it is possible to take the highway as such space, and that when the highway is so interpreted, certain states of affairs will result. (In this respect, Foucauldian genealogy has important resemblances to Peircean pragmaticism.)

Tweed gets at this point when he claims that the noun “spirituality” has the same function in discourse as an interrogative pronoun. As David Walker—someone hire this man, stat!—makes clear, the questions posed by spirituality are questions to which we all give answers. Spirituality is nothing outside of spirituality-talk. Its questions are embedded in various conversations that have taken place and are continuing. To write about spirituality is to write about a plurality of discourses. But to keep that plurality in mind, we must love the possible validity of each of those discourses. When scholars write as if some objects of affection are better than others, or as if they have intuited Something Real in or through those objects, it is the responsibility of other scholars to yell “NO!,” like a toddler.

I believe the toddlers are our future. Teach them well and let them lead the way. Show them all the fierceness they can express to the outside.

Martin Kavka is professor of religion at Florida State University, where he teaches courses in Jewish studies and the philosophy of religion. He is the author of Jewish Messianism and the History of Philosophy (Cambridge, 2004), and the co-editor of Judaism, Liberalism, and Political Theology (Indiana, 2014), as well as the co-editor of the Journal of Religious Ethics.