Ed Kilgore argues that American Catholics no longer represent a voting constituency that is significantly different from non-Catholics: 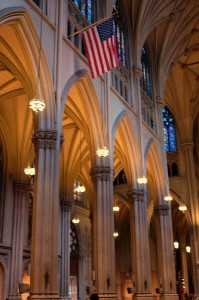 The more you look at the numbers, the idea that there is some identifiable Catholic vote in America, ready to be mobilized, begins to fade towards irrelevance. In the 2000, 2004, and 2008 presidential elections, Catholics voted within a couple of percentage points of the electorate as a whole. It’s notable that both the Democratic vice president and the Republican Speaker of the House are Catholics—and that few Americans are likely aware of that fact.

This was not always the case, of course. From the days of Andrew Jackson to JFK, Catholic voters were considered a mainstay of the Democratic Party coalition. Irish and German Catholics were at home in the conservative Democratic party of the nineteenth century, and were supplemented by southern Europeans as the New Deal Coalition developed in the twentieth. While the Catholic attachment to the Democratic Party has persisted to a steadily diminishing extent in state and local elections, the disproportionate pro-Democratic “Catholic vote” at the presidential level abruptly ended in 1972 and has never returned.

Read the full article at The New Republic.