After the secular age 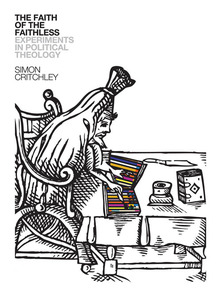 Just out from Verso Press, Simon Critchley’s The Faith of the Faithless: Experiments in Political Theology investigates the role of religion in the postsecular twenty-first century:

The return to religion has perhaps become the dominant cliché of contemporary theory, which rarely offers anything more than an exaggerated echo of a political reality dominated by religious war. Somehow, the secular age seems to have been replaced by a new era, where political action flows directly from metaphysical conflict. The Faith of the Faithless asks how we might respond. …

From Rousseau’s politics and religion to the return to St. Paul in Taubes, Agamben and Badiou, via explorations of politics and original sin in the work of Schmitt and John Gray, Critchley examines whether there can be a faith of the faithless, a belief for unbelievers. Expanding on his debate with Slavoj Žižek, Critchley concludes with a meditation on the question of violence, and the limits of non-violence.

See this post on the Verso Books blog for more on Critchley’s book and an upcoming launch event in Brooklyn featuring the author in conversation with Cornel West.