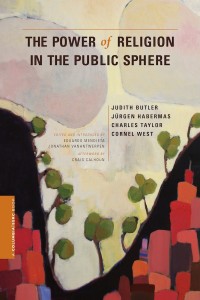 It is, of course, open to question whether in fact the modern social order is undergoing such secularizations. Certainly much of the developing world is experiencing them unevenly and in some cases, such as Egypt today, inversely. This is the context of the current philosophical interest in state secularization, including this subtle and generous essay by Akeel Bilgrami.

Bilgrami enters the philosophic debate triggered by the challenges that uneven secularization pose to liberal-democratic legitimations of state secularization in particular. As John Rawls was early to grasp, we can no longer insist that only secular beliefs and values may engage public reason and hence (more to the point) state rationality. Charles Taylor recently advanced further into post-secularity by suggesting that the Western Church-State separation model has become obsolete. Religion is rather to be managed by a neutralist, but not necessarily secular, state, so as to be treated as just another element inside social “diversity.”

With the Indian case mainly in mind, Bilgrami resists Taylor’s argument that we should thus diminish state neutrality. He argues, however, for a negative concept of state neutrality. For him, the state needs to rank religious practices lower than the ideals and practices of its own “polity,” as he puts it, in cases where they are inconsistent with (i.e. negate) the state’s political ideals. These first-level ideals may vary from state to state, but it is clear that Bilgrami thinks of them in Rawlsian terms both as rights—to life, freedom of speech, and equal treatment under the law and so on, and as goods—like welfare provision, distributive justice, and cheap universal education.

I am in general agreement with Bilgrami’s argument. But I am puzzled by the turn it takes at the point when he squarely confronts the most obvious problem it poses. What about states and polities that don’t accept rights-based, liberal-democratic ideals and the rights and goods that they promise? In such states, there may be no legislative or administrative tension between Church and State, and the demand for neutrality need not get a look-in. The polity may be religious through and through. How might a state-neutralist of Bilgrami’s stripe persuade such a non-secular, non-liberal state to join his position?

The problem is all the sharper because, as has become standard in post-secular liberal arguments, Bilgrami wants to make his case without reference to intellectual secularism. He does so by distinguishing what he calls “atheism” from “secularism.” Atheism (a rather loaded term) denies religion’s propositional truth, while secularism is a “stance towards religion” taken in pursuit of non-religious ends, and which, as such, cannot be true or false. (Here Bilgrami is drawing a distinction similar to the one that Habermas posits between religion’s “validity claims” and its “truth content” [its morality and ethical sociability].) For Bilgrami, there are only “internal reasons” for pursuing secularism (i.e. reasons grounded in one’s own values) not external evidentiary ones. So revealed and natural religion’s falling out of propositional truth is discounted.

Because the secularism that underpins state neutrality is regarded just as a stance set into a particular cultural orientation, Bilgrami contends that mere philosophic argument cannot persuade its enemies of state neutrality’s virtues. That will only happen in history, which Bilgrami claims will follow a particular trajectory. In the future, he supposes, ostensibly unified religious polities will divide. Internal conflicts will erupt in them. They will then be exposed to secularist persuasion by outsiders who can successfully point out contradictions in the confessional polity’s values and legitimations. Appeals to atheism or positive secularism need not play a role in this process either.

Bilgrami calls this historical trajectory Hegelian because of its broadly dialectical progression. He also calls it humanist because it draws more and more people into the same liberal discursive field.

This is an ingenious philosophical prophecy. But the obvious problem with it is that history has not so far worked this way, and Bilgrami offers no good reasons for us to think that it will in the future either.

I can’t address the issues that Bilgrami’s turn to history raises in any depth, so I’ll content myself with three broad points, the first two of which displace philosophic discussion of state secularization by connecting it to capitalism, and thus implicitly to contemporary history’s actual motor. The third places the debate between Taylor and Bilgrami in a different historical trajectory than the one that Bilgrami himself offers, by offering a distant genealogy of Church/State relations.

1. The modern state has an indirect commitment to social secularization, independently of questions concerning diversity, law, and public policy. This is because, under normal conditions, contemporary states are committed to promoting national economic growth, and the conditions for globalized capitalist economic growth are also conditions that advance social secularization. Political philosophers tend to neglect this relationship and its implications when they discuss secularization since they are interested in constitutions, not political economies, and are often also under the thrall of idealized concepts like Habermas’s “public sphere” or Rawls’s “public reason.” But questions about how or whether public reason or constitutions should (in theory) accommodate “religion” are (in fact) largely overshadowed by this underlying material relationship between state and social secularization. Resistance to constitutional secularization in states like Iran is, or will be, undermined by its force, which, we can fairly confidently predict, will largely shape the future.

2. Modern states also nurture the truth protocols embedded in intellectual secularization when, for instance, they subsidize scientific research and technical education. States do this not so much because they want to encourage evidentially-based and scientific truth for its own sake, but, once again, because scientific discoveries and technical competence aid economic productivity and growth. Relations between science and religion are complex—one may even simultaneously be an “atheist” in Bilgrami’s sense and a practicing Christian for instance. Nonetheless there can be little doubt but that science has helped, and continues to help, de-legitimize religious truth as grounded either in nature or revelation. So in funding scientific research and education, states loosely bind themselves to intellectual secularization. Indeed thoroughgoing democratic liberalism, of the kind that Taylor and Bilgrami support, lapses in the education system, since, in certain disciplines, contemporary pedagogy insists on the scientific method. Pluralism and diversity do not apply there. That is the framework in which disciplines like biology and cosmology (the list is long) produce knowledge that encourages religious skepticism, and hence “atheism.” These disciplines too are routinely and properly supported by states, perhaps with most enthusiasm by those whose economies rely most on technical and scientific innovation. At any rate, this again implants a certain secularization into the modern capitalist state.

It is important to note that education’s commitment to science and technology need not appeal to the ethical value of truth and truthfulness as these were spelled out by Bernard Williams in his book of that name. There he argued that a commitment to truth grounded an ethics with the power to establish new associations and forms of sociability. The debate over state secularization also shies away from this attractive thesis.

3. History. Bilgrami’s appeal to history as the setting for state neutrality and its legitimation does not refer to the actual history of state secularization in any detail. This is especially to be regretted since the origins of Western exceptionalism, and hence of modern liberalism and state neutrality, are to be found in the deep history of Church/State relations.

“The West,” as the idea and force with which we are familiar, begins with Latin Christianity’s break with Byzantine Christianity. This was solidly in place by 1000 CE, mainly caused by a split over state organization. The Western empire was committed to dual sovereignty—sovereignty divided between the Pope and the Emperor—while the Eastern empire allowed its rulers authority over the Church. Of course, after about 1400, Western attempts to figure a way of dividing sovereignty between the Church and a territorial ruler violently broke down. New possibilities beckoned. These included: Church reform by accepting state sovereign authority (Martin Luther); attempts at republican theocracy (Jean Calvin’s Geneva); religious civil associationalism (Pietism after Philipp Jakob Spener, and then global evangelicalism); orthodox Erastian confessional state-organization, whether Protestant or Catholic (as in the Gallican mode). Within this array of Church/State relations, a further distance between the Church and State had emerged by the seventeenth century. Civil society along with its elemental subjective component—what John Locke called “opinion”—became important social and political agents.

After the Treaty of Utrecht (1714), when the religious wars ended and a European balance of power was established, the conditions for stable religious “tolerance” emerged inside the machinery of the modern state. At this point, however, the Latin Continent was largely left to Catholicism, and the world’s oceans to Protestant Britain, condemning Protestant Northern Europe to a structural disadvantage whose bitter harvest the twentieth-century would reap. After Utrecht, commerce, finance capital, civil society, and private opinion all flourished, further marginalizing ecclesiastical institutions as powers. A century or so later, after the revolutions of 1848, the ideological machinery for securing national unity was largely transferred to nationalism.

This trajectory ends in the global system of state capitalism we know now, and whose only fully legitimated constitutional form is liberal democracy. But the triumph of democratic state capitalism has not fully met the expectations established by its own normative bases. In this situation, it becomes possible to hope not for more democracy and liberty, not for better and fairer capitalism, not for stronger states, but rather for a divided sovereignty along associationalist lines. That is, for a partial return of the Latin Christianity’s founding structure, for a new dual—or multiple—sovereignty.

Since the late-nineteenth century, that hope has, indeed, driven a minor political-theory lineage with both right and left inflections. On the right: Frederic William Maitland, John Neville Figgis, Otto von Gierke. On the left: the young Harold Laski, G.D.H. Cole, Paul Hirst, and Christian socialism à la R.H. Tawney. And Christian socialism is where Charles Taylor began his career, and which at least intermittently continues to guide it from afar, even (I’m willing to conjecture) when he is arguing the case for a post-secular liberal-democratic constitution as in the essay to which Bilgrami replies.

My brief and bold genealogy of Church/State relations places Bilgrami’s debate with Taylor in a different historical context than the one that Bilgrami supplies himself. It makes it clearer still that one of his differences with Taylor is over the sheer extent of state sovereignty in relation to religion. Taylor wishes to reduce democratic state sovereignty, Bilgrami to maintain it. As I said, I think he is right about that, especially in cases like India. But given the internal contradictions of democratic state capitalism, its failures to meet its own norms and purposes (e.g. equality of opportunity and participation, liberty, widely-based prosperity), I find myself also willing to imagine situations in which the state foregoes its monopolization of sovereignty, and accedes some of its power to associations. As far as I am concerned, these cannot, however, be religious associations, since the argument against religion’s validity claims has indeed been won.

From this perspective, the real challenge becomes: how to imagine and invent strong non-religious associations with substantive values and satisfying practices of life? Associations capable of taking back some state sovereignty, admittedly (as Bilgrami urges) in ways that don’t threaten state neutrality? One theoretical possibility would be for atheists (associating in the interests of truth) to take over the Churches’ rich and solid institutions from the inside, which might indeed herald a return to older conditions and styles of at least Christian ecclesiastical practice, in which belief was not a prerequisite for episcopal ordination. But that is just a politics of hope and imagination.

Simon During is a Professorial Fellow at the School of Communication and Culture at the University of Melbourne. His books include Modern Enchantments: The Cultural Power of Secular Magic (2002) and Against Democracy: Literary Experience in the Era of Emancipations (2012). He is currently working on a book on the idea of the humanities.