Catholic Culture reports that Cardinal Gaudencio Rosales of Manila has “called for prayers of reparation for a blasphemous art exhibit.” What art exhibit, you ask? “Kulo,” a controversial and recently-shut-down exhibition at the Cultural Center of the Philippines features, in particular, pieces by artist Mideo Cruz. Kyle Chayka, of Artinfo.com, explains the scandal: 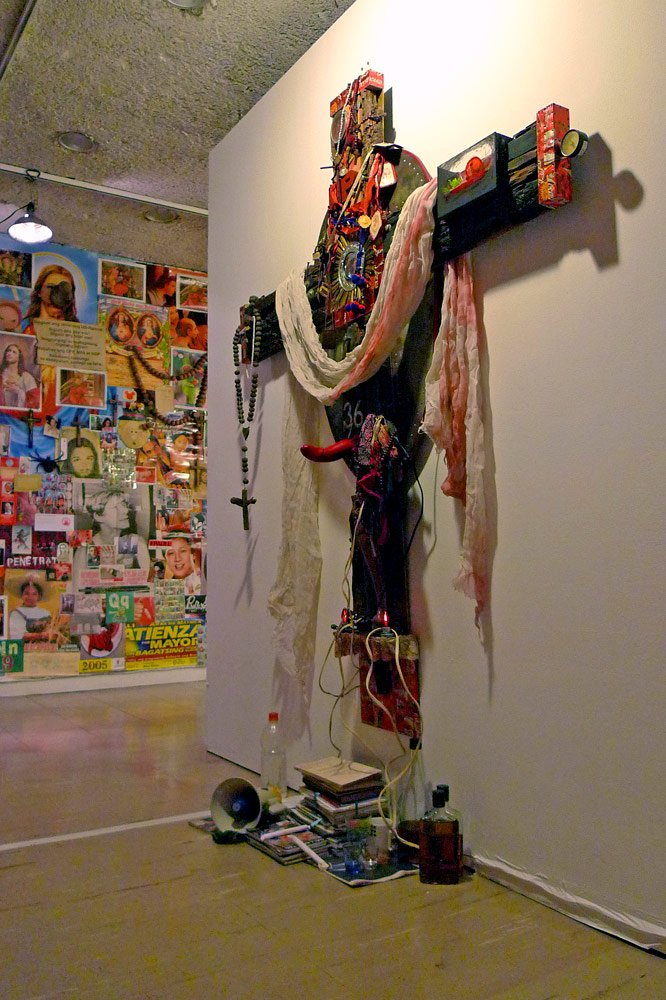 It is a mish-mash of religious and worldly iconography that has divided viewers. The art world in general applauds the expression of the artist’s personal vision, while some Roman Catholics are indignant, with some lay Catholic groups even considering filing charges against the artist and the CCP to “stop (sic) the exhibit in 48 hours or face the legal consequences.”

In the case of “Politeismo”, religion + art does not necessarily equal religious art, the kind of art that fills our museums and private collections—exquisitely-carved wooden mild-faced saints in robes with eyes lifted to heaven or carrying their eyes on a plate; paintings of miraculous scenes, Christ on his cross, or Mary stepping on a serpent, its fangs embedded in her white foot, her head wreathed in stars or roses.

Mideo’s art brings these deities and saints to the level of humans. And why not, one might say? That is the risk run when the object of worship is depicted as human. In this instance, the sacred + religious = sacrilegious, as its detractors claim.

Q:  “With this controversy, what would you say are the prevailing or dominant attitudes in the country when it comes to works that touch on religious matters?”

Mideo: “That’s where I started trying to understand the making of the sacred and how the people contribute to that. Then I reconstruct it with parallel meanings relevant to our life as people. It really depends on the audience how they perceive the images, there are various reactions of course.

Read the rest of Ortuoste’s article and interview with Mideo here.