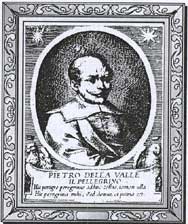 There really is no feeling quite like what you experience when you open a box of documents for the first time in the Vatican Archives. The documents are usually wrapped up in a piece of thick brown paper and bound with twine. Every piece of paper, every letter, is different. After a while, you come to recognize the handwriting, the misspellings, the abbreviations; you can pick up a letter and, before even looking at the signature, you know instantly that it’s Pietro Avitabile or Alvise da Pesaro, the same way you know, when you open a card, that it’s from your mother or your best friend.

Early modernity—the period from the Italian Renaissance through the Enlightenment—was a particularly exciting and dynamic period of time. That’s where we find the beginning of European imperialism, modern science, the discovery of the New World, globalization: in short, the rise of the modern world. In my own research, I am particularly eager to understand how European perspectives on Islam and the Middle East were shaped by the many cultural and intellectual changes of the early modern period. To make my project manageable, I decided to focus on an Italian world-traveler Pietro della Valle. Pietro della Valle was a highly sociable geek with an interest in all things Middle Eastern, c. 1620. His extensive surviving personal correspondence, preserved in the Vatican Archives in Rome, allows me to reconstruct the far-flung intellectual community of which he was a part. By exploring Della Valle and his world, I hope to discover why Europeans suddenly became so interested in Arabic and other “Orientalist” studies in the early seventeenth century, and how this knowledge affected the ways in which they related to Middle Eastern Christians and Muslims.

Istanbul might seem like the natural place to go, but I instead found myself applying for an Italian visa, in late August of 2010, to join Rome’s community of scholars in the many libraries and archives that make the Eternal City such a wonderful and exciting place to pursue research. In the series of entries to follow, I will tell you more about the particular joys and challenges that we historians of early modernity face as well as try to depict what life in the Vatican Archives is really like.

Today, though, I want to tell you a little bit about one of Della Valle’s correspondents, the hapless, naïve Neapolitan missionary Pietro Avitabile, a friend Della Valle made in Naples. There really wasn’t anything tremendously remarkable about Avitabile’s life, other than his tendency to get into all sorts of trouble in the Ottoman Empire (being a subject of the Ottomans’ great Mediterranean rival, Habsburg Spain, certainly didn’t help him). What was special about Avitabile was his commitment to writing regularly. Whenever he had a spare moment, he dashed off a short letter, sometimes just a few lines, to Della Valle, updating him on his adventures and misadventures in the Eastern Mediterranean. A whole world comes into focus as I read Avitabile’s letters, following him and his clutch of equally enthusiastic fellow Neapolitans from Messina to Malta to Istanbul.

What I particularly enjoy about Avitabile’s letters is how very “immediate” they are. Avitabile does not write official reports in his letters (as he would do later) but jots down observations that he hopes Della Valle will find interesting. His letters, of course, are not transparent windows onto reality. The lengthier ones are carefully written and composed, following the expectations of the genre. Still, they seem “fresher” than the relazioni, or formal state-of-the-mission reports summarizing missionaries’ adventures in the field over ten- or twelve–year periods. Unlike the author of a relazione, Avitabile never knows what will happen next, or what will become important.

A letter of Avitabile’s from Istanbul that I came across today is particularly interesting. After a harrowing voyage, Avitabile and his fellow Neapolitans finally land in Istanbul, where they are warmly welcomed by the French ambassador to the Ottoman sultan, Ambassador Cesy. “You would not believe the favors that the French Ambassador shows towards us,” Avitabile writes.

Really? I wonder why the French ambassador would make such extravagant gestures on Avitabile’s behalf. Why does Ambassador Cesy shower Avitabile and his hapless companions with gifts, money, supplies, and free dinners? More importantly, why does the Ottoman state tolerate this kind of behavior? Fervent Bektashi or Mevlevi dervishes certainly wouldn’t receive this kind of welcome in seventeenth-century Spain! What is going on?

Somehow, my research always leaves me with more questions than answers. But my researching friends Christian and Manuel walk by and tap on my desk. It’s 11 AM, time for our coffee break and thirty minutes of Italian-language conversation. The documents will just have to wait.

Rosemary Lee is a graduate student in the Corcoran Department of History at the University of Virginia. Her research focuses on early modern Italy.