The way of the brother

S. Brent Plate offers a new reading of Terrance Malick’s The Tree of Life, complicating the either/or dualism constructed in the film and disseminated in its reviews: 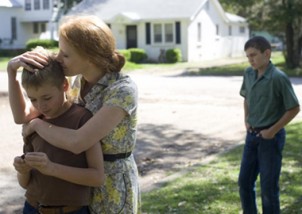 I realize The Tree of Life is not merely about parental spouses acting out nature and grace in divergence from their childrens’ lives. The film, and the reality of growing up, is also deeply about sibling relationships with each other—à la Cain and Abel, Mary and Martha, Flint and Little-Sprout, Helen and Clytemnestra, Jacob and Esau, Romulus and Remus—which is where so many critics and observers have got the film wrong. The Father-Mother choice is there, but Malick provides a way out of the bifurcation: the way of the brother. This does not exclude the nature-grace distinction, but wraps it up in another form. And in distinction to all those old myths in which the siblings rival, fight, and kill each other, Malick’s sibling is redeemed through the other.

Read more of Plate’s take on Tree of Life.