The Theological and the Political 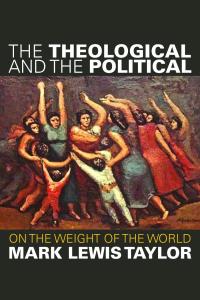 From Fortress Press, an interview with Mark Lewis Taylor, author of The Theological and the Political: On the Weight of the World (Fortress, 2011):

Most of us probably associate joining the political and the theological through either political theology or public theology, but you’ve chosen a different way. Did you find those older approaches inadequate in some way?

Well, the political and public theologies, as often practiced by Christian theologians are often inadequate. They don’t quite work in the challenge of the moment marked as it is today by political and theological thought, appearing in some strikingly new constellations. Why are we seeing, for example, avowed atheist political thinkers writing on the incarnation or the trinity? Why does philosopher Alain Badiou, who “cares nothing for Paul’s gospel,” yet write a political commentary on St. Paul. Slavoj Žižek writes blockbluster bestselling books for academics and draws huge crowds across Europe, the US and in South America, fusing reflection on Christ’s incarnation and Che Guevara, while skewering “political correctness” with a mix of jokes, Hegel, G.K. Chesterton, and philosophical rigor. Another political philosopher, Giorgio Agamben, writes a deeply thoughtful commentary on just the first verse of Paul’s Letter to the Romans. Postcolonial critic Gayatri Chakravorty Spivak dreams of an animist “liberation theology” for our times of financializing exploitation, but then declares all theology impossible, as are, she adds, most of the religions. I don’t think all this can be set aside as just some latest academic fad. It is a sign that theological and political thinking belong to one another in some striking new ways. In other words, thinking about religious beliefs (the theological), and about power and its organization in society (the political) are being re-thought from the ground up. In contrast, political and public theology have all too often thought, “Well, we have theology, we know what it is, now we need to address some political or public issues.” We have our Christology, for example, now let’s spell out its meanings for the public order.” That’s clearly insufficiently complex for our more turbulent and tangled present, in which theology and political theory are engaging one another afresh.