Egypt’s revolution and the new feminism

“I’m making this video to give you one simple message. We want to go down to Tahrir Square on January 25. If we still have honor and we want to live in dignity on this land, we have to go down on January 25. We’ll go down and demand our rights, our fundamental rights. . . . Your presence with us will make a difference, a big difference!”
—Asma Mahfouz

“I made a video asking people not to be scared, asking how long will we live in fear, that we should go to the streets and that there are plenty of men in Egypt, and we can protect ourselves from Mubarak’s thugs. Now I’m getting many threatening calls from Mubarak’s people ordering me not to leave my home, and saying that if I do I will be killed along with my family.”
——Asma Mahfouz, to BBC Arabic Television 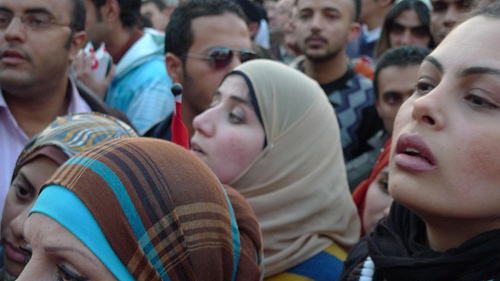 A young Egyptian woman willing to put her life on the line used Facebook to issue this clarion call to her compatriots. On February 25, they went out by the thousands. During the following days, their numbers swelled into the millions. The Revolution of 2011 had started. On February 11, the eighteenth day of the Revolution, President Mubarak was ousted and the stage of building a new Egypt began.

The youth-driven Revolution of 2011, with its call for freedom and justice, is inscribing a new feminism, with a fresh lexicon and syntax. The new feminism—which does not go by the name “feminism,” but by its spirit—redefines the words freedom, liberation, justice, dignity, democracy, equality, and rights. It creates its own syntax, which, the dictionary reminds us, is the “arrangement of words to show their connection and relation.” It announces itself from deep within the Revolution, which aims to resurrect the fundamental principles and rights of citizens and human beings that were wantonly trampled down by the Mubarak government. The new feminism might be called, simply, “freedom, equality and justice for all.” It asserts itself in actions, straight-forwardness, and courage.

Over the course of eighteen days, Midan Tahrir, or Liberation Square, the geographical center of Cairo and the epicenter of the 2011 Revolution, became a swirling kaleidoscope of images of freedom, equality, and justice in the making, with the whole world looking on. Saturday, February 12, the first day Egypt woke up without its harsh dictator of thirty years at the helm of a repressive regime, was the first day in the in the new life of this ancient country. Young women and men who had gone out to sweep away the tyrannies, inequalities, and injustices could be seen on this day with brooms in hand, now literally sweeping the streets clean. With bottles of detergent and brushes in hand, they wiped the walls around the square. They even scoured the pedestals of the lion statues at the Kasr al-Nil Bridge, where the “Battle of the Bridge” erupted on the first Friday of the Revolution, and where the police hurled tear gas at the peaceful demonstrators making their way to Midan Tahrir to practice democracy their own way, feet—not boots—on the ground, when all other avenues were blocked.

In the Egyptian Revolution of 2011, the youth were joined by citizens of all ages—workers, students, professionals, women and men, Muslims and Christians. It was a populist movement mobilized in cyberspace and through local networks, and acted out on national soil. The new feminism is a feminism embedded in revolution. It is so fused with the revolution that to use the term “feminism” seems redundant or superfluous, even anachronistic, and we have just observed that the revolutionary actors themselves do not use it. Yet feminism possesses conceptual and explanatory power, and so we employ it analytically. At the core of feminism is a call for the practice of equality and justice for women, who as a group have suffered historically from systemic inequality and injustice. Women in different parts of the world—Egypt among them—have on many occasions organized to take for themselves the rights that have been withheld from them. They have done so both in their own feminist movements and within broader social and political movements and configurations. Early in the last century, for instance, Egyptian women formed the Egyptian Feminist Union, to fight for their rights as women while they worked simultaneously within the national liberation movement. In so doing, they set a precedent for multi-level activism. Egyptian feminists understood from the beginning that the equality and justice that they sought for women was of a piece with equality and justice for all.

Over the years, activists in Egypt seeking human rights, inclusive of women’s rights and social justice, pushed strenuously for reform. They tried to use classical methods—the vote, the press, television and radio, and public demonstrations—but elections were rigged, the media controlled, and public demonstrations met with violence, which for women often included sexual harassment, molestation, and rape. Reform movements typically involve campaigns focused on particular causes, including causes specific to women. In Egypt, as attempts to reform the existing political system were repeatedly thwarted—that is, brutally rendered impossible—by the state, revolution became the only way, and revolution demands a major overhaul of the political and social order, indeed, that the old system be swept away altogether.

In the twenty-first century, the tools of revolution have drastically changed, while the methods of state repression, as we have seen recently and vividly in Egypt, remain archaic and crude. The regime’s methods stemmed from the arrogant belief that an autocratic regime, with its vast power and violent means of repression, is unassailable. Autocrats take for granted that constitutions can be rewritten at will from on high to extend state power and impose their own rules for succession; that sham elections can produce compliant parliaments; and that the military, policy, intelligence, and security apparatuses possess limitless authority to muzzle citizens.

It is Egypt’s youth who have mastered the tools of the twenty-first century—information and communications technologies—and who are at home in cyberspace, a “country” in which they are free even while they remain shackled in their homeland. It is the youth who possess a belief in ideals, a vision, and a healthy impatience. Navigating the Internet, and with careful coordination on the ground, undaunted they mounted a peaceful assault upon the unmitigated, suffocating power of tyranny and oppression that had left no segment of society untouched.

Cairo’s Midan Tahrir has been called the epicenter of the 2011 Revolution, whose topography extends to Alexandria, Suez, and cities and towns throughout the country, including even the oasis city of Kharga, deep in the Western Desert of Upper Egypt. The choreography of shouting, gesticulating, dancing young men and women, joined by Egyptians of all ages, was caught on live feeds and transmitted instantaneously across the globe. It was captured on film and videos and recorded on cell phones and digital cameras by demonstrators and reporters. This rich visual and oral album displays a gender pastiche of women and men side by side—clusters upon clusters of women amid seas of men, women and men shoulder to shoulder, and families with small children. The demonstrators and their supporters all craved the same thing: an end to the tyranny of the dictator and his corrupt regime, and the emergence of a free society with equal opportunity for all. They called for an end to the inequities of gender, class, and connection that formed the tight and insidious web of patriarchal hierarchy.

With the dismantling of the three-decade-old autocracy of Mubarak—itself a continuation of the previous autocracy—and the hierarchies that spawned spirals of injustice as people’s basic rights were hijacked, the people of Egypt, led by its youth, grabbed for themselves the chance to rebuild.

The builders of the new Egypt want nothing less than full equality in law and practice, justice, and dignity for all. As we speak, a special committee is drafting a new constitution (to supplant the previous one that was arbitrarily altered by Mubarak). Laws that undermine the equality, justice, and dignity of the citizens of Egypt must either go or be drastically overhauled. The Muslim Personal Status Code (also referred to as family law) structures a model of the family based on a patriarchal understanding of Islamic jurisprudence (fiqh). This law, by formalizing male authority and power, shores up a system of gender inequality. The husband is cast as the head of family, with the attendant privileges and prerogatives, along with obligations of protection and support, while the wife, as subordinate, owes obedience to her husband and must render services in return for his support and protection, whether she wants it or not.

Feminists, as well as other reformers, have tried since the early twentieth century to reform the Muslim Personal Status Code. Over the years, they obtained only minor adjustments in the law, which did not disturb the patriarchal family model. A common excuse for this failure to reform the Muslim Personal Status Code is that it is religious law, part of the shar ‘iah, and therefore sacred and immutable. The confusion of fiqh, or Islamic jurisprudence, which is man-made, with the shar ‘iah, which is the path to a virtuous life, ascertained from the Qur’an, has been a potent deterrent of change. However, it is possible to enact an egalitarian family law based in Islamic jurisprudence, as Morocco did in 2004, with the overhaul of the Mudawanna that recast husband and wife as equal heads of the family. It is also theoretically possible, if politically difficult, to enact into law a secular egalitarian model of the family that would reflect the spirit of religion and its ideals of equality, justice, and dignity, the ulemah, or religious scholars, in Turkey say their country’s secular family law does.

With the overthrow of the authoritarian state in Egypt and the dismantling of the buttresses of its power, and with legal reform already underway with the creation of the committee tasked with drafting a new constitution, equality and justice in law and practice now have a renewed chance at realization. The harsh inequities that authoritarianism enforces were there for all to see, in their starkest, most extreme form, in the practices of the regime that the youth eventually took down. Will the youth now be willing to accept patriarchal authoritarianism sustained by the old family law, a law so out of sync with contemporary social realities—with their own realities? It is very hard to see by what logic they could do so. Freedom, equality, and justice cannot be reserved for some only. For the youth, female and male, who raised this revolution, freedom, equality, and justice are surely non-negotiable, and dignity, the order of the day. This is the essence of the new feminism, call it what you will.

Margot Badran, a historian and gender studies specialist focusing on the Middle East and Islamic societies, is a Senior Scholar at the Woodrow Wilson International Center for Scholars and a Senior Fellow at the Prince Alwaleed bin Talal Center for Muslim-Christian Understanding at Georgetown University. Her most recent book is Feminism in Islam: Secular and Religious Convergences (Oxford University Press, 2008). Read Margot Badran's contribution to Egyptian elections.