A Muslim revolution in Egypt 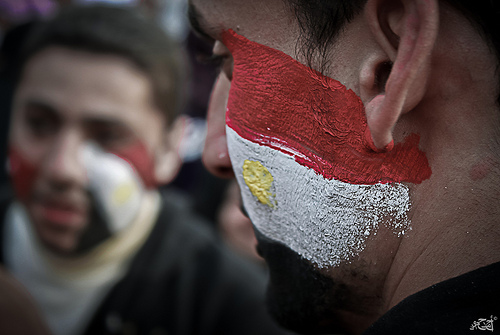 In the wake of the successful ouster of Hosni Mubarak by an unprecedented and, until recently, unthinkable uprising of the Egyptian people, many observers have failed to notice a peculiar feature of the coverage of these events in the American media. News organizations reporting on Egypt in the last two and half weeks have repeatedly raised the specter of the Muslim Brotherhood taking over the government in the absence of an organized secular opposition. At the same time, most have been at pains to point out that the protests for reform represent a granular, grassroots movement, largely “secular” in its orientation. The narrative hook of the story is therefore the danger of a secular movement being taken over by more fundamentalist Muslims if the transition is not orderly, or if it is managed incorrectly. The problem with this story, of course, is that the vast majority of Egyptians, those in Tahrir Square and elsewhere, would not describe themselves as secular in any meaningful sense. There are so-called secularists among them, and certainly also many Coptic Christians, but most are pious Muslims. Polling data by Pew Research and other organizations has consistently shown that Muslims in Egypt support the idea that Islam be a guiding concern for any government in their country. Such data has also consistently shown that they support democracy, freedom, and human rights. This combination has confounded most Western observers. So they fall back to the comforting dualism between religious commitment and secular reason when describing events that happen in the Muslim world. If the Muslim Brotherhood represents Muslim politics, then protesters must represent secular politics. It is a simple dualism, and it is also simply wrong.

Underlying the continuing utility of this trope is the presumption that Muslims as political actors face a stark choice. Secular, liberal democracy vs. Islamist, religious theocracy. There is no middle ground. It is for this reason that the AKP in Turkey continues to be called “mildly Islamist” by The Economist and other publications, while the GOP (which in many ways is far more Christian than the AKP is Islamic) needs no such qualifier. It is this same trope that Hosni Mubarak has used to great effect over the last three decades to justify his repressive regime to his friends in the West. In fact, when James Clapper, the Director of National intelligence, recently tried to make the case to Congress that the Muslim Brotherhood had disavowed violence for participation in democratic politics, he could find no other language to describe it except to call the group “largely secular”! Although he was immediately assailed by folks from the left and the right for this supposed faux pas, he was only giving voice to the internal contradiction built into the dualistic trope through which the West continues to miscomprehend both Islam and Muslims. Recent events in Egypt and elsewhere are unequivocal signs that Muslims will no longer be held hostage to this artificial and corrupt dualism. They are democratic and Muslim. Deal with it.

For a whole host of reasons, it is important that we recognize the people who carried out this magnificent and peaceful revolution as Muslim. In the last ten years, we have been subjected to a constant barrage of villains from the Muslim world. If we are going to call the terrorists Muslim, and the radicals Muslim, and the fundamentalists Muslim, then why not the heroic men, women, and children who have braved the threat of violence for the last two and half weeks to fight for their rights? By calling them “secular” protesters, we diminish the value of their sacrifices. More, we fail to understand the true nature of what is happening in Egypt. Muslims are rising up against an oppressive regime, in the absence of any organized secular opposition. And they are doing this without any notable assistance from the Islamist Muslim Brotherhood. There is no communist party in Egypt. No great secular hero like Mustafa Kamal Ataturk. No liberal stalwart to educate the population about their universal rights as human beings. In between shouting for their economic and political freedoms, Egyptians prayed in the streets. According to numerous news reports, they constantly chanted “jihad” in the original, authentic meaning of the term, struggle against injustice and suffering in this world. And they demanded a voice in the affairs of the state, or, as Mr. Obama put it, an opportunity to control their own destiny. This they did as Egyptians. But also as Muslims. But we choose not to see the truly profound statement that was made here—that Muslims are different from those in the West, and yet not so different after all. Both at the same time. Not one or the other. Revolutions have a wonderful way of clarifying that which is obscure. Let us hope that this one has put to rest, once and for all, the myth of Muslim obscurantism.

Images of men praying in Tahrir Square and of hijab clad women crying out for change have a far more profound meaning than has been acknowledged by the Western media. Other than demanding the fall of the Mubarak regime, Muslims in Egypt today are also challenging the false and restrictive choice between secularism and Islamism. What is happening in Egypt is a Muslim revolution, not an Islamic revolution, or a Secular revolution. We in the West would do well to acknowledge that.

Khurram Hussain is a doctoral student in the Religious Studies Department at Yale University, a Visiting Fellow at the Center for Global Islamic Studies at Lehigh University, and a guest contributor to here & there.

Khurram Hussain is a doctoral student in the Religious Studies Department at Yale University and a Visiting Fellow at the Center for Global Islamic Studies at Lehigh University. His dissertation, titled "Islam as Critique," focuses on the theology of nineteenth-century Indian Muslim reformer Sayyid Ahmad Khan as a mediatory discourse between Western modernity and traditional Islam by putting Khan in conversation with the work of Reinhold Niebuhr, Hannah Arendt, and Alastair MacIntyre.