Adieu to philosophy of religion? 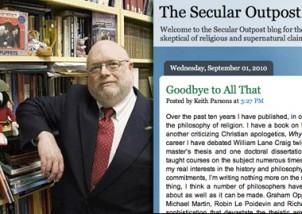 Julia Galef reports for Religion Dispatches on philosopher Keith Parsons’s decision to quit doing philosophy of religion. In September, Parsons, Professor of Philosophy at the University of Houston-Clear Lake, had announced on the The Secular Outpost:

I have to confess that I now regard “the case for theism” as a fraud and I can no longer take it seriously enough to present it to a class as a respectable philosophical position—no more than I could present intelligent design as a legitimate biological theory. BTW, in saying that I now consider the case for theism to be a fraud, I do not mean to charge that the people making that case are frauds who aim to fool us with claims they know to be empty. No, theistic philosophers and apologists are almost painfully earnest and honest… I just cannot take their arguments seriously any more, and if you cannot take something seriously, you should not try to devote serious academic attention to it.

Referring to Parsons’s use of the term “fraud,” Galef writes:

Compared to more esoteric subfields like philosophy of language or metaphysics, philosophy of religion is much more likely to attract people with deep-seated, lifelong beliefs about the topic. Because viewpoints in philosophy of religion are so emotionally fraught and bound up with a person’s lifestyle, values, and relationships, changing one’s mind is a daunting prospect. The central point of contention—the existence of God—is most fraught of all, not to mention starkly binary.

But some readers questioned this construal of the options. Commenting on Galef’s article, Drew theologian Catherine Keller wrote:

Parsons is making an honorable choice. I just want to whisper, for readers who may feel their hearts sink at the difficulty of persisting these days, so long after “the death of God,” as non-atheist thinkers: don’t get trapped in the drab premises of this debate! Any theist worth her salt should relinquish “God,” if that overwrought monosyllable signifies nothing but the boiled down, literalized, formalized, dogmatically tight and dreary little notion presumed by both the philosophers of religion and by the philosophical atheists alluded to in the article. “All-knowing, all-powerful, all-good”, “existing” like some thing among things. Or not. Take heart! Theology is replete with livelier options, all different from each other but all free of that deadening either/or: theopoetic, Tillichian, Whiteheadian, feminist, ecological, relational, deconstructive, postsecular, polydox–even biblical! Not just middle ground, but open terrain! Let the dead bury the dead.

Richard Amesbury is Professor of Theological Ethics and Director of the Institute for Social Ethics at the University of Zurich. He is the author of Morality and Social Criticism (Palgrave Macmillan, 2005) and Faith and Human Rights (Fortress, 2008). Read Nathan Schneider's interview with Amesbury here, and read Richard Amesbury's contributions to Reflections on summer reading, Reflections on summer reading, Surveying religious knowledge, Religion and the midterm elections, After Sandy, and Values and violence: Thoughts on Charlie Hebdo.