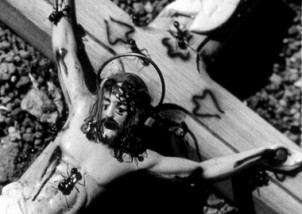 David Wojnarowicz’s “Fire in My Belly” is an expression, not of hostility to the Christian faith, but of a deep, and profoundly agonized, spirituality, argues S. Brent Plate, contra the Catholic League (and 0thers), who successfully lobbied last month to have the piece removed from the National Portrait Gallery’s “Hide/Seek: Difference and Desire in American Portraiture” exhibit, ostensibly because of its depiction of Jesus’ crucified body encroached upon by ants. “In the midst of the hoopla,” says Plate, “is a deeply religious artwork made by an artist struggling with and through the embodied life of the spirit.”

As Plate amply demonstrates, though it is hard to imagine needing a reminder, “Christianity itself has produced some of the most gruesome images of tortured, dying, suffering, and dead bodies, especially Jesus’s own body.” Plate sees an evocative affinity between “Fire in My Belly” and some of the great works of European religious art—e.g., Matthias Grünewald’s “Small Crucifixion” (c. 1511/1520) and Hans Holbein’s “The Dead Christ” (1521)—as well as with the surrealism of Salvador Dalí (in which the ant motif is recurrent). The theme of Wojnarowicz’s piece, Plate writes, is indubitably death. “More specifically,” he continues, “it is the vulnerability, penetrability, and perpetually possible disintegration of the human body,” concluding:

Now, in the time of Advent, a time of reflection on the in-flesh-ment of the divine in a human baby, there is little more important than a deep understanding of the humanity of Jesus. And to be human means to take on this mortal body, to suffer, and to die. To become food for the ants.

So, given Plate’s compelling excavation of the recognizably Christian undercurrents of Wojnarowicz’s piece, why, then, was it removed from the National Portrait Gallery? The push to have the piece taken down began with a story on CNS News, which opened:

The federally funded National Portrait Gallery, one of the museums of the Smithsonian Institution, is currently showing an exhibition that features images of an ant-covered Jesus, male genitals, naked brothers kissing, men in chains, Ellen DeGeneres grabbing her breasts, and a painting the Smithsonian itself describes in the show’s catalog as “homoerotic.”

This litany of offending images suggests that the opposition had more to do with the federal funding of an occasionally graphic exhibit on homosexual desire than with theological or iconographic considerations, and that “Fire in My Belly” was just an opportunity for outrage that was not to be missed. As Talking Points Memo’s Brian Beutler reported earlier this month,

After the initial [CNS} story went live, the reporter who wrote it [Penny Starr] turned to House and Senate leaders of both parties to seek comment by email. [. . .]

Starr received responses soon thereafter from a spokesman for House Republican Leader John Boehner and from Minority Whip Eric Cantor, who demanded the exhibit be “pulled” and threatened the National Portrait Gallery’s funding.

“This is an outrageous use of tax payer money and an obvious attempt to offend Christians during the Christmas season,” said Cantor. “When a museum receives taxpayer money, the taxpayers have a right to expect that the museum will uphold common standards of decency. The museum should pull the exhibit and be prepared for serious questions come budget time.”

From there the story became the subject of multiple segments on Fox News. “[Y]ou have the tax dollars funding this wonderful art display,” snarked Glenn Beck.

As regards National Portrait Gallery Director Martin E. Sullivan’s decision to pull the video, despite the opportunity for a principled defense of the freedom of expression, more venal, if not entirely unreasonable, motives appear to have taken the day. As Sullivan told The New York Times:

“It’s really a very tough call to make. Obviously the Portrait Gallery is a part of the Smithsonian. It’s just one of many, many players in this new discussion or debate that’s going on in Congress about federal spending, the proper federal role in culture and the arts, and so forth. We don’t think it’s in the interest, not only of the Smithsonian but of other federally supported cultural organizations, to pick fights.”