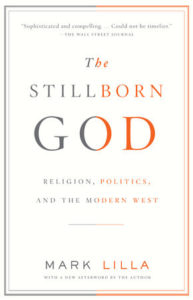 Developed and elaborated by Hobbes, Locke, Hume, and others, the Great Separation dictated that for the purposes of political philosophy and political argument all appeals to higher revelation would be considered illegitimate. Modern political philosophy, in this reading, has relinquished comprehensive claims about the being of God, the structure of the cosmos, the nature of the soul, the origin of things, and the end of time by disengaging reflection about politics here on earth from theological speculations about what may lie beyond it. We in the West have disengaged our reflection about the beyond, arriving at the mature realization that the logic of political theology, whatever form that it takes, leads to a dead end. The escape from political theology is, for Mark Lilla, the most distinctive feature of the modern West.

This positive, at times triumphalist, narrative gathers some momentum in Lilla’s book, at least at first. It is a compelling and confidence-inspiring story. Yet at other moments The Stillborn God approaches historical and contemporary European negotiations of religion and politics with hesitance and even trepidation, with Lilla concluding near the end of the book that “the river separating political philosophy and political theology is narrow and deep; those who try to ride the waters will be swept away by spiritual forces beyond their control.” In this second, more defensive mode of argumentation, which competes throughout the book with the first, Lilla presses the reader to acknowledge the danger of negotiating a third way between political theology, defined as appealing at some point to divine revelation, and, political philosophy that attempts to attain political good absent such appeals on the other. This tension between the West’s alleged accomplishments in the domain of religion and politics and the prospect that these salutary advances are under siege from a variety of quarters runs throughout the book, pushing the narrative forward and lending coherence to what otherwise might read more like an introduction to the religious politics of several Western canonical political thinkers than an intervention into contemporary debates on religion and politics.

Lilla’s claim that the Great Separation is unique to the West has important implications for global politics, and I want to point toward some of the difficulties surrounding his assumption that (Western) postmetaphysical political philosophy is located on a fundamentally different and distinct plane than political theology. I question the assumption that Western theopolitical identities, practices, and institutions are fundamentally different and distinct from other civilizations that allegedly have yet to discover the resources to make such a transition possible.

For Lilla, Westerners are the exception because we live on what he calls “the other shore.” Civilizations on the “opposite bank” puzzle us because we have only a distant memory of what it was like to think as they do. They are, moreover, unlikely to follow our path because to successfully navigate the hazardous shoals of political theology as we have done would require a difficult excavation of theological resources. Lilla seems skeptical that this will occur, in part because he seems to lack confidence in the capacity of other traditions to negotiate these difficult matters, and in part because our own crossing to the “other shore” has been complicated “by the fact that the religious anthropology that supplanted theology as the foundation of Western political thought contained paradoxes and problems of its own.” This crossing has been placed in jeopardy by, among others, intellectual traditions that seek to revive political theology within the West, such as those that draw on the writings of Ernst Bloch and Friedrich Gogarten, and Lilla is as critical of these as he is candid about the alleged shortcomings of other civilizations. Thanks to these internal dissenting traditions, he laments, political theology has once again entered through the back door of Western civilization, threatening the hard-won gains of the Great Separation and overwhelming liberal theologians such as Cohen and Troeltsch with messianism by exploiting the “gnostic potential embedded in the Bible’s promise of redemption.” Lilla’s remedy for this backsliding into political theology is to rely upon “our own lucidity” to reign in the impulse to theologize politics, to hold ourselves in check when tempted by questions of theology, cosmology, and metaphysics. It is a question of discipline. The liberal deity is a stillborn God; political theology has been reborn.

Reading Lilla’s argument next to The Invention of World Religions, Tomoko Masuzawa’s study of the vicissitudes of European discourse on world religions and its relation to the formation of modern European identity, gave me a different take on these questions. Masuzawa offers an alternative historical and philosophical framework for contextualizing Lilla’s argument as part of a broader tradition of secular European discourse on world religions. As she suggests, “the new discourse of pluralism and diversity of religions, when it finally broke out into the open and became an established practice in the first half of the twentieth century, neither displaced nor disabled the logic of European hegemony—formerly couched in the language of the universality of Christianity—but, in a way, gave it a new lease” (xiv). Lilla’s self-congratulatory contention that we in the West have made it (though fitfully and not without setbacks) to the other shore appears as part of a long historical trajectory of Western discourse about religion that has served to reinforce a particular understanding and practice of European identity, global power, and hegemony. Modern discourse on religion and religions, as Masuzawa argues, was from the beginning a discourse of secularization at the same time that it was a discourse of othering. A symmetry and affinity appear between these two “wings” of the religion discourse, enabling it to “do the vital work of churning the stuff of Europe’s ever-expanding epistemic domain, and of forging from that ferment…the essential identity of the West” (20).

Lilla’s argument serves to buttress a particular understanding and practice of a “secular” West that claims to be developmentally more advanced than its non-Western rivals, while reinforcing Western identity in opposition to a series of others (both inside and outside the geographical West) defined by their location on the “other shore” of an allegedly clean political philosophy-political theology divide. Whether and how other civilizations and internal dissenting traditions will be quarantined to this “other shore” is not entirely clear. In any case, the presumption that we have left the rest of the world on the opposite bank does a great deal of work in international politics. In an earlier post on this blog, Nicolas Guilhot suggested that part of the problem in international relations scholarship is the assumption that “the very idea that the ‘science’ of politics that has shaped our understanding of international affairs is substantially different from religious worldviews or political repertoires claiming a relation to some form of transcendence.” In other words, and contra Lilla, could it be that we are all on the same shore, struggling with questions of transcendence and immanence in different languages and traditions? If so, Guilhot is right that we have to let go of the notion that “we” in the West “enjoy some kind of epistemological privilege because our understanding of world politics has somehow worked itself out of its own cultural embeddedness and acquired universal relevance by becoming secular.”

Lilla’s confident defense of the West’s hard-won, allegedly “postmetaphysical” accomplishments and accompanying call to arms against threats to these accomplishments emanating from both inside and outside the West propel his argument forward. This alternation between a confident narrative of theopolitical success and the frightening potential that it will be (already has been?) derailed helps to explain why the author finds the prospect of navigating the waters separating political philosophy and political theology so threatening. Lilla’s conclusion that those who spend time exploring these waters risk the possibility of being swept away by “spiritual forces beyond our control” attests to the unresolved tension between his aspiration for a clean divide between political theology and political philosophy and the messy realities of the politics of religion in the real world.