Secularism of a new kind 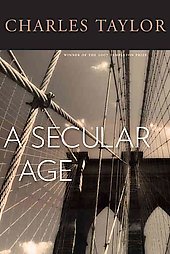 I have long admired Charles Taylor and have read most of what he has written and always found him helpful. Yet for me, A Secular Age is his breakthrough book—one of the most important books to be written in my lifetime. Taylor succeeds in no less than recasting the entire debate about secularism.

From the very first pages it is clear that Taylor is doing something different from what others writing about secularization have achieved, because he distinguishes three senses of secularity. Almost all the literature on secularization with which I am familiar falls under Taylor’s first two categories of secularity:

• Secularity 1: the expulsion of religion from sphere after sphere of public life.

• Secularity 2: the decline of religious belief and practice.

Many excellent books have been written on these two aspects of secularization.

• Secularity 3: “the conditions of experience of and search for the spiritual” that make it possible to speak of ours as a “secular age.”

I doubt that many people have even perceived this third dimension, and Taylor’s book should be as much a revelation to them as it has been to me.

To bring Secularity 3 into view, one must call in question some of the presuppositions of the usual discussions of Secularity 1 and 2: namely, that “science” (or “rationality” or “modernity”) has undermined the possibility of religious belief. Taylor devotes much of his book to a history of the conditions that gave rise to Secularity 3, and they simply can’t be summarized with the usual formulae.

Taylor argues that the Reformation—with its radical rejection of the monastic life and the demand of a kind of monastic discipline for everyone—is just the preliminary culmination of a thousand years of pressure of Christianity toward Reform. He then shows how, even when Protestantism itself comes in question, long-term pressure toward Reform continues, first in 18th-century Deism and its attendant strong emphasis on Benevolence, and then in the 19th-century emergence of unqualified (secular) humanism with its emphasis on progress.

According to Taylor, it is not “science” or “Darwinism” that accounts for these developments, but the continuation of a moral narrative that was already long present in Christianity. Even the emergence in the late 19th century of anti-humanism (Nietzsche) cannot be understood except in terms of the particular features of what was being rejected: namely, both Christian and secular social ameliorism. By seeing the emergence of the secular age in narrative form primarily, rather than as a theoretical discovery, I think he makes the whole thing far more intelligible and explains our present quandaries far better than any competing accounts.

Perhaps the most obvious person to compare Taylor with would be Peter Berger, whose many books cover some of the same ground but never with the same thoroughness or historical depth of Taylor. José Casanova, particularly in his important book Public Religions in the Modern World, deals with some of Taylor’s issues, but again his canvas is much smaller. David Martin has written interestingly on secularization, but has stayed mainly within the framework of Taylor’s Secularity 1 and 2. I really can’t think of anyone who has explored what Taylor is calling Secularity 3 with anything like his breadth and penetration.

Perhaps the closest predecessor for Taylor’s arguments is Max Weber, though Taylor’s differences with Weber are still major. Like Weber, Taylor argues that the Reformation attempted to obliterate the difference between the religious (in the sense of monastic) life and daily life by giving the latter a profound religious meaning in the doctrine of the calling—an effort that, to the extent that it succeeded, ended up undermining the very tension that the Reformation itself generated. But he diverges from Weber in maintaining that the success of the drive toward Reformation, mirrored to more than a small degree by the Counter-Reformation initiative, gave rise to new problems.

On the one hand, the very success of these efforts seemed to imply that their religious underpinnings were no longer necessary—that secular “progress” could take over from religious impulses. Yet, as the book’s Part III shows, the new secularity produced its own problems, sometimes but not necessarily leading to a retrieval of religious belief. What we have now is a situation in which neither belief nor unbelief can be taken for granted and where ever more numerous examples of both continue to appear on the scene.

Part IV and particularly Part V outline the possibilities and conundrums in the midst of which we live.

In closing, it is worth pointing out this is not a work of apologetics. Indeed, it would be hard to find a book in this area with so little polemic, so generous an understanding of all the possible positions—including those farthest from his own—and with so little need to show that any side in this multi-sided process of change is more virtuous than any other. Taylor is clear from the beginning that he writes as a believing Catholic: he believes that the Christian effort to reinvent itself as part of the new secular world is a positive event. Yet he is merciless as to its many failings.

I have always admired Taylor’s generosity of spirit, his lack of the usual scholar’s need to put other people and other positions down. That he has been able to maintain his irenic spirit in considering issues of the greatest importance not only to the modern world but to himself as an individual is a tribute to him and an example to be followed.

I think the book could well be the primary text for graduate seminars, and parts of it could be assigned in undergraduate courses, though it is a little too long and perhaps too demanding to be used as an undergraduate text except in a few universities and liberal arts colleges. I would also consider the book a “must read” for anyone concerned with religion and modernity—and that includes a great many people in today’s world.

Robert Neelly Bellah (1927-2013) was an American sociologist and educator, who for 30 years served as professor of sociology at the University of California at Berkeley. His books on the sociology of religion include Beyond Belief: Essays on Religion in a Post-Traditional World (1970), The Broken Covenant (1975), Habits of the Heart (1985), The Good Society (1991), and Religion in Human Evolution (2011). In 2000, he was awarded the National Humanities Medal by President Clinton. Read Nathan Schneider's interview with Robert Bellah.