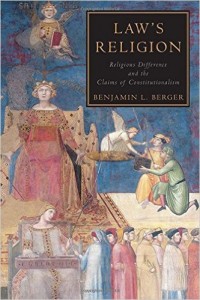 Prevailing public stories about religion and contemporary constitutionalism place great faith in the capacity of legal multiculturalism, rights-based toleration, and conceptions of the secular to manage issues raised by religious difference. Yet the relationship between law and religion consistently proves far more fraught and far more agonal than this conventional account would suggest. More than just descriptively wanting, this conventional framing conceals the insistently political character of the interaction between constitutional law and religion.

In search of a more satisfying account, Law’s Religion: Religious Difference and the Claims of Constitutionalism knocks law from its perch above the realm of culture, arguing that, in the modern liberal state, the constitutional rule of law is an aspect of, not an answer to, the challenges of cultural pluralism. In service of reimagining the cultural location of law, Benjamin L. Berger urges a phenomenological turn in the study of law of religion, an approach that gives analytic priority to understanding the experience of law—the ways in which law frames experience and, as a consequence, is itself experienced by religious individuals and communities as a potent cultural force.

Denying us the comfort of law’s conceit of its autonomy from culture, Berger sheds light on how constitutional law’s way of imagining religion shapes religious freedom; on the nature and limits of legal tolerance; and on what all of this might imply for the ethics, virtues, and practices of adjudication. Though generated from a close reading of Canadian constitutional jurisprudence, the account developed in Law’s Religion reveals tensions and lessons relevant to all liberal legal orders dealing with questions of constitutionalism and religious difference.

In this series, scholars from across the disciplines engage with and respond to Berger’s work.

In Theory From the South: Or, How Euro-America is Evolving Toward Africa, Jean and John Comaroff consider the juridification of…

Ben Berger’s book Law’s Religion: Religious Difference and the Claims of Constitutionalism is a work of great insight. I found…

Several decades ago in an essay entitled “Making Up People,” the Canadian philosopher Ian Hacking wrote that, “if new modes…

I cannot help but see a pun in the title of Benjamin Berger's book, Law’s Religion: Religious Difference and the…

Benjamin Berger’s Law’s Religion: Religious Difference and the Claims of Constitutionalism is a welcome addition to the vibrantly interdisciplinary scholarship on…