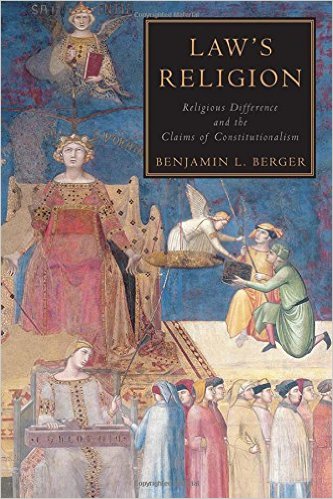 Several decades ago in an essay entitled “Making Up People,” the Canadian philosopher Ian Hacking wrote that, “if new modes of description come into being, new possibilities for action come into being in consequence.” Benjamin Berger’s new book Law’s Religion: Religious Difference and the Claims of Constitutionalism is generative in exactly this sense: it re-describes and it gestures toward new possibilities for action. Berger begins with a deceptively simple question: were we to take neither legal concepts nor normative political or legal theory but rather the experience of the law as an analytical point of departure, what would this entail for the study of law and religion?

Deeply informed by the phenomenological turn in the study of law and legal reasoning, and beautifully written, Berger’s book tackles this challenge by taking the reader on a guided tour of the culture of Canadian constitutional law’s rule with regard to religion. His approach is grounded in the conviction that scholars of law and religion need to explore not only the law’s conceptual commitments vis-à-vis religion but also “the experience of being worked upon by a legal regime that operates, in this case, from a position of toleration.” The book delivers an impressive understanding of those commitments and of that experience with regard to Canadian multiculturalism. It prepares the reader to see and to welcome the points of friction and dissonance that emerge between legal constructs of religion, on the one hand, and the varied individual and communal practices that fail to conform to these authoritative constructs on the other. In demystifying the Canadian constitutional rule of law, Berger also re-politicitizes it. Acknowledging the limits of all forms of legal discourse when faced with the unruly character of lived experience, he develops a powerful critique of liberalism’s imperial ambitions in the realm of constitutional law. He also explores the potential of an alternative adjudicative ethos beyond legal liberalism. I’ll say a few words about each of these contributions.

Law’s Religion takes the reader on a journey to the edges and the margins of Canadian constitutional legal culture. From that vantage point she can glance back over her shoulder and perceive clearly the ways in which Canadian liberal legal culture is indebted to certain received images and understandings of religion: as individual, chosen, autonomous, and private. “Religion,” Berger writes, “has force in the eyes of the law to the extent that it is aligned with autonomy and choice.” Taking us beyond that insight, Berger then guides the reader through a sophisticated discussion of the “spatial aesthetics of religious freedom” introducing “law’s time” “law’s space” and, perhaps, law’s sight (the latter is my term—what the law sees and doesn’t see) in a fascinating phenomenological reading of Canadian legal practice. In this way Law’s Religion develops more fully an insight from Berger’s earlier work: that law’s pretension to be merely a curator, rather than a component, of cultural pluralism is just that—no more than a pretension. Woven into this re-description, and emerging from it, the reader achieves a sense of the “experiential residue” and related “explanatory gap” that Berger identifies as among the principal costs of the hubris of the culture of law’s rule and its claim to stand above the fray. “Religion,” he concludes, “is not only what law imagines it to be.”

Crucially, we have here an effort to re-politicitize legal discourse and scholarship while stressing the limitations of all forms of legal discourse faced with the untidy and unruly realities of lived experience. A particular strength of this book, then, lies in Berger’s ability to strike a balance between critiquing the current dominant liberal legal forms and practices while also acknowledging the limitations that inhere in each of the alternatives. He thus not only endorses but also enacts in the text the bicameral ethos of fidelity and humility that animates his work. This ethos entails fidelity to a new and chastened understanding of the culture of law’s rule, accompanied by humility in the face of the limits of human understanding when confronted with the ambiguities of lived experience.

Law’s Religion is also an ambitious critique of liberalism’s imperial ambitions in the realm of constitutional law. In the strongest form of this argument, Berger draws on the work of Paul Kahn and others to critique scholars such as Will Kymlicka and Ayelet Shachar. He likens the rigid boundaries of toleration characterizing Kymlicka’s scholarship with the conventional legal approach that he criticizes, in that both structurally insulate and isolate their norms and assumptions from contestation.

Berger’s argument in this respect brings to mind Matthew Scherer’s trenchant critique of John Rawls in his excellent book Beyond Church and State. Scherer’s text re-enacts the force of the Rawlsian argument as a means of diagnosing and destabilizing its persuasive rhetorical power and function. This makes for a gripping account, in that, like Berger, Scherer also communicates the suffocating sense of closure that accompanies the experience of being subjected to the disciplinary edge of liberal theorizing and liberal legalism, respectively. Both authors question the compulsion inherent in this genre: the demand that the reader (or the liberal legal subject) acquiesce in advance to the normative demands of the argument. In the case of “Saint John,” as Scherer’s chapter on Rawls is aptly titled, we come to understand that Rawls was engaged in what Scherer describes as “a sophisticated and rhetorically nuanced effort to foster the conditions of agreement needed to carry the convictions that [Rawls’] arguments are supposed to support.” And also that Rawls remained closed to that which lies beyond the limits of any current instantiation of public reason.

Scherer’s discomfort in the face of these normative demands resonates with Berger’s diagnosis of the “anxiety and awkwardness” of law’s response to religion as practice as opposed to religion as merely belief. In its strongest form, then, Berger not only critiques the presuppositions and assumptions underlying liberal legal subjectivity, though he does that as well, but like Scherer he goes further to hone strategies that allow us to work ourselves out of the grip of legal liberalism. Berger challenges the law’s attempt to foster and impose in advance the conditions of agreement that are “required to carry the convictions its arguments are intended to support.” The results are rewarding. One sets these books down having gained a palpable, even experiential, sense of not only the cost of the ascent to theory but also the work performed by particular practices and traditions of theorizing in shaping sensibilities and channeling (and also foreclosing on) political and legal possibilities.

Law’s Religion also explores, if tentatively, an alternative adjudicative ethos of humility and fidelity. Drawing on the work of William Connolly, Berger pursues this ethos as a means of cultivating indifference and expanding the limits of Canadian practices of legal tolerance. Justice Binnie’s dissenting opinion in the AC v Manitoba (Director of Child and Family Services) case, involving a teenage girl’s refusal on religious grounds to undergo a life-saving blood transfusion, illustrates the potential of this alternative ethos. Berger’s reluctant foray into a more prescriptive mode points to a productive tension or paradox that emerges from this work and that of others. While resisting the demands imposed by what he describes as the “tyranny of insistence on constructive solutions,” Berger also endeavors to articulate an alternative adjudicative ethos “beyond” legal liberalism. To embrace rather than to strive to transcend this paradox is, perhaps, one way of following through on Hacking’s wager.