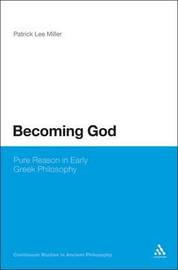 My previous post argued that anyone who wishes both to think well and to feel well about the world should seek a way of thinking as immanent as it is transcendent, a crosswise way of thinking that is more capacious than the logic of consistency defined by the principle of non-contradiction. Fortunately there has long been such a way, the way of Heraclitus: “A thing agrees in disagreement with itself; it is a crosswise harmony (palintropos harmoniē), like that of the bow and the lyre.” In Becoming God I have argued that Heraclitean logic is not only more ancient, but also more accurate than the logic of consistency that Parmenides and the Platonic tradition deployed against it. This tradition has been dominant from the moment of its founding, thanks in part to the rhetorical genius of its founder, making non-contradiction the supreme principle of reason in the eyes of nearly every philosopher since. This post aims first to humble it before the next seeks to revive its Heraclitean rival.

Humble it, that is, but not reject it. For without it, as philosophers say, everything is permitted. Some recent ones have questioned it nonetheless, reviving the Liar Paradox of late antiquity: “This sentence is false.” It appears to be a normal declarative sentence, so it should be true or false. But which? If it were true, what it says must be the case, so it should be false. Yet if it be false, this is exactly what it says, so it should be true. Despite elaborate attempts to defuse it, this paradox persistently threatens an explosion, the logical equivalent of a nuclear detonation, destroying the principle of non-contradiction and thus the imperative to think consistently. But even those who champion the paradox recognize the incoherence of abandoning this principle altogether. Their goal is to humble it, not reject it. Similarly respectful of it, this post seeks only to demote it from the status Aristotle assigned it, namely “the firmest of all.”

Whether or not it can be saved from the Liar—which could perhaps be dismissed as an anomaly, radioactive uranium to be safely contained somehow, somewhere where it will not corrupt the rest of our thinking—the principle of non-contradiction exhibits a more serious flaw: it cannot accommodate anything in time, let alone time itself, where we live and breathe and have our being. Here, in brief, is the problem: this logical principle requires that everything temporal be consistent at a moment, although no moment is itself consistent. Aristotle formulates the principle this way: “The same attribute cannot at the same time belong and not belong to the same subject in the same respect.” He adds that we may supply other qualifications as needed, but the most important of all he has already mentioned: time. Yesterday, for example, was not contradictory if it was both cloudy and not-cloudy; it may have been cloudy in the morning and sunny in the afternoon; the attributes cloudy and not-cloudy belonged to yesterday at different times. If anything were to undermine the principle, then, it would have to do so at the same time—in other words, in a moment, in the twinkling of an eye.

Now, ironically, Aristotle himself observed that if time were a succession of moments, each one would have to perish, for only so could these moments yield to one another and produce the flow of time. When, however, could a particular moment perish? In which moment could it do so? Not in itself, for then it would both exist and not exist; nor could it perish in any other moment, for then it would be simultaneous with a different moment. Both options, in short, would violate the principle of non-contradiction. So too would the same options available to any moment that is supposed to be born. It could only be born in itself or in another moment, and both are equally contradictory. Indeed, the paradoxical options available to anyone who freezes time into moments resemble nothing so much as the dilemmas produced by a student of Parmenides, Zeno of Elea.

Zeno’s most beguiling paradox, the Flying Arrow, invites us to imagine the flight of an arrow frozen in a moment. Were we to freeze a flying arrow in a ‘now’—catching it on film with a high-speed camera, so to speak—it would occupy a space equal to itself. For if it should occupy a space longer than itself, it would be moving, not frozen. In our photographic analogy, it would be as if our shutter speed were too slow; rather than catching the flying arrow at a moment, we caught it over several moments, creating a blur. Catching it in a ‘now,’ we would find it occupying a space equal to itself, which is to say motionless. In every ‘now,’ at every moment, it must be motionless. Yet at each moment it must also be moving. After all, it is a flying arrow: if it never moves, it cannot fly. In sum, then, at every moment it must be both moving and still. The flying arrow would seem to violate the principle of non-contradiction.

According to Aristotle, however, such an absurd “result follows from the assumption that time is composed of moments: if this assumption is not granted, the conclusion will not follow.” In other words, if “time is not composed of indivisible nows,” but is instead infinitely divisible, there is no freezing the flying arrow in a moment. For if a motion happens over time that is infinitely divisible, every division of its duration should reveal it to be moving. While moving, it must always occupy a space longer than itself, only less so with each finer division. Because there is no final division, neither is there any moment at which the arrow turns out to be still. One solution to this paradox, therefore, is to claim that time is not composed of ‘nows’; instead, it is infinitely divisible, a flowing continuum rather than a particulate succession.

Is the same Aristotelian solution available to explain a related puzzle, the paradoxical change of everything in time? Consider an especially vivid instance of this change: fire. As a process, it is ever-changing, a sort of motion. Dividing the duration of its burning—where this burning is parallel to the arrow’s moving—we shall never reach a moment when it ceases to burn, anymore than we shall reach a moment when the arrow is still. The parallel is important to keep in mind, because the same photographic temptations arise for fire that arose for the flying arrow. We imagine capturing a fire on film, and with the image of such a fire before our minds, we are tempted to think that we have frozen it in exclusive satisfaction, the way we were tempted by Zeno to think of the arrow as perfectly still in a ‘now.’ But if time is infinitely divisible, however finely we divide the duration of the fire’s burning, it is no more static in this division of its duration than was the arrow perfectly still in its own. In every division, no matter how fine, the flying arrow is moving. Correlatively, in every division, no matter how fine, the fire is burning.

This burning is a satisfaction with fuel, lest it be extinguished, but it is also a need for fuel, lest it be static. Fire, wrote Heraclitus, is “need and satiety.” It cannot consistently burn in a moment, anymore than an arrow can fly in a moment, and so it should come as no surprise that any analysis that freezes it so creates a conflict. Thanks to the analyses of Aristotle and Zeno, though, we can say more precisely that the logical offense occurs only when we conceive of time as divisible into ‘nows.’ Yet there is a deep irony here that Aristotle himself does not seem to recognize: the principle of non-contradiction that he himself codified requires us to conceive time and change this way. It analyzes time into moments in order to insist, as a necessary condition of being and knowledge, that the attributes of everything so analyzed be consistent with one another.

Yesterday was both cloudy and not-cloudy, but this was no true conflict because its contradictory attributes belonged to it at different times. No such analysis is available when we use the principle to think fire, however, because its satisfaction and neediness remain forever intertwined in each moment. So likewise, it turns out, whenever we scrutinize anything else in time, which is itself both dying and being born, inextricably together, in every moment and forever. If the principle of non-contradiction really is a necessary condition of knowledge, as Aristotle claimed, knowing any object must require freezing it in a moment and finding it consistent then. But if everything in time—everything that undergoes process, change, and motion, albeit less visibly and dramatically than fire—must be inconsistent in each moment, nothing temporal can be known as such. Indeed, because Aristotle thinks that nothing contradictory can be, nothing temporal can ever exist as such.

Philosophers who revere the principle of non-contradiction thus require true existence to be unchanging, timeless, and eternal. Plato’s Forms are but the paradigms of this requirement, showing most clearly how devotion to consistent thinking favors transcendence by rendering the immanent world impossible, unknowable, and even an evil illusion. If the argument of “Love and reason” was accurate—that a purely transcendent philosophy inhibits love of the world—the emotion associated most often with this way of thinking should be resentment. This was Nietzsche’s abiding critique of philosophers, principally those in the Platonic tradition; this critique drove him and those indebted to him, especially Heidegger, to seek a way of thinking otherwise. Finding his alternative in the philosopher whom Parmenides attacked for his “crosswise” way of thinking, Nietzsche wrote that “the world forever needs the truth, hence the world forever needs Heraclitus.” The next post turns to him, attempting to reveal his concealed logic before using it in a final post to answer Connolly’s invitation “to honor Jesus by offering a distinctive interpretation of his calling and mode of inspiration.”