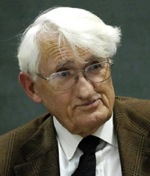 Jürgen Habermas is one of the most prominent philosophers on the global scene of the last half century. His work is of an impressive range and depth. It would be impossible to sum it up in a short essay, but I shall try to single out three facets of his extraordinary achievement which help throw light on his deserved fame and influence.

Jürgen Habermas is known in the world of analytic philosophy primarily as a moral and political philosopher. He has striven against a slide which has often seemed plausible and tempting for modern thinkers, that towards a certain relativism or subjectivism in morals. The difficulty of establishing firm ethical conclusions in the midst of vigorous debate among rival doctrines, particularly when these disputes are contrasted to those among natural scientists can all too easily push us to the conclusion that there is no fact of the matter here, that ethical doctrines are not a matter of knowledge, but only of emotional reaction or subjective projection, that the issues here are not cognitive.

Habermas from the very beginning set his face against these non-cognitivist views. There can be ethical knowledge.  But he wished also to break with a long-hallowed notion of what this knowledge must consist in, that which we find in the traditions which go back to Plato and Aristotle. According to these, ethical knowledge has for its object human nature, or the nature of things. In other words, it is grounded in some normative picture of what humans are like, or else of their place in the universe. According to Habermas, it was the discredit of these “metaphysical” views which gave colour to non-cognitivism in the first place. In order to refute subjectivism, morality needs another kind of rational basis.

The alternative route which he explored was that which makes the rationality of ethical conclusions a function of the rationality of the deliberation which produces them. A deliberation is rational if it meets certain formal requirements. This is, of course, the route which was pioneered by Kant. But Habermas made a revolutionary change in this tradition. Whereas for Kant the principal criterion of a rational and therefore defensible deliberation was that it was sought universalizable maxims, for Habermas the very notion of deliberation is transformed. Following Kant a lone reasoner can work out what maxims can be the objects of a universal will.  But Habermas introduces the dialogical dimension. The ultimately acceptable norms are those which can pass the test of acceptance by all those who would be affected by them.

In other words, for Habermas, ethical deliberation is primarily social, dialogical; it is worked out between agents. Of course, in a secondary way, we can and often do deliberate on our own, but the shape of our ethical world is dialogically elaborated, and this conditions all our moral thinking, even when we want to rebel against the morality of our community.

In proposing this transformed model of ethical reasoning, Habermas was articulating two profound changes in the consciousness of the later 20th Century, one philosophical, the other in our political culture. The philosophical change was the dialogical turn itself, which we see in a host of places: in the critique of monological Cartesian foundationalism by figures like Wittgenstein and the phenomenological writers, in the sociological literature which began to stress the dialogical nature of identity-formation, as we see with George Herbert Mead. One could prolong the list almost indefinitely.

The second big change, in the political culture, also gave a new importance to dialogue. The political identities of democratic societies were no longer seen as defined once and for all by some founding principles or acts. The combined impact of feminism, of multiculturalism, of the battles over identity and recognition, of the gay movement, and so on, brought to the fore how much traditional modes of understanding were based on silent exclusion of minorities. Redefining, renegotiating the political contract came to be seen as an important, often urgent task; and this could only be carried out dialogically.

Habermas’s philosophical articulation of the dialogical turn was not the only one. There are rival attempts  which many (including this writer) would find more convincing, but his was an extremely important and influential one, and this is one of the sources of his deserved prominence.

Moreover, Habermas’s dialogical moral theory was much broader and deeper than that of most analytical philosophers, because it has been worked out against a background of social thought, and above all of a theory of the development of modernity. In this respect, that is, in the scope of his interests, he is more of a “continental” philosopher, for all of his affinities with certain analytical thinkers. This is the  second important aspect which I would like to take up.

Drawing on the work of Weber, Habermas sees modernity as having brought about a transformation in our understanding of reason. There have been a number of formulations of this idea in his work, but I’ll deal here with the one he offered in his immensely influential Theorie des kommunikativen Handelns of 1981. For Plato and much of the Western tradition, reason is a single faculty or power which can strive to define not only the True, but also the Good and the Beautiful. That is, the same reason can establish the shape of all the important dimensions of human life: establishing what really is, deciding what we ought to do, and determining what is truly beautiful. We might speak of the scientific, the moral and the aesthetic dimensions of human life.

What Habermas proposes in the place of this is not, as we have seen, a restriction of reason to the scientific domain, and a relegation of morals and aesthetics to the arbitration of emotion or subjective taste. Rather it is a diversification of the very procedures of reason. Scientific reason tries to map the real; but moral reason, as we saw above doesn’t try to map some other domain, say, of human nature. Rather the whole notion of rationality here doesn’t rely on the idea that valid ethical norms correspond to some domain of fact. Rather the justified conclusion is designated as such by its emerging from a certain form of dialogical deliberation. Being right here has a quite different shape than it does in the factual or scientific domain. And an analogous point is made for the aesthetic sphere.

For Habermas a key feature of modernity is this differentiation of spheres, whereby rational validity ceases to mean a single thing, and to have a similar shape in the different domains. This is the shift which underlies the use of the term “post-metaphysical” applied to ethics and political theory, and which occurs frequently in Habermas’s writings. The morally justified acts or norms are no longer such because they correspond to or correctly map some metaphysical reality.

It is clear that we have here not simply a moral theory but a theory of history, and indeed, a philosophical anthropology of uncommon scope and depth, and this has been another contributing factor to Habermas’ global reputation.

But these two factors would not have had the impact that they have were it not for a third feature: that Jürgen Habermas is an exemplary public intellectual. He has never been content simply with writing, teaching, and discussing philosophy. Unremittingly and with great courage he has intervened in the important debates of our time, for instance in the Historikerstreit within Germany, and more recently in issues to do with the “war on terror,” as well as the future of Europe. One might almost say that theory and practice are organically linked in the thought of Habermas: as a theorist of democracy and of open, undistorted communication, he cannot but intervene when these crucial vales are suppressed or denied, without being untrue to himself.

Or in any case, that is the way he lives his philosophy, with a kind of passionate integrity. And it is this courageous and consistent stance which has made a deep impression on thinkers and citizens, not only in Germany, not only in Europe, but world-wide.

In our time, we can almost fear that the public intellectual is an endangered species. On the one hand, the role can be trivialized by the proliferation of collective petitions for fashionable causes which it is very easy to sign. On the other, in the making of policy the intellectual is often replaced by the expert, master of some narrow field, who is rarely asked to decide on the use to be made of his expertise. In this world, Jürgen Habermas stands out as a shining example of the philosopher-citizen, two roles indissolubly linked in a figure of great depth and integrity. We, in democratic countries and beyond, are all in his debt, and that more than anything else accounts for his unparalleled prominence. He is an inspiration to us all.

A version of this text originally appeared in German earlier this year, in honor of Jürgen Habermas’s eightieth birthday. Later this week, Jürgen Habermas and Charles Taylor will join Judith Butler and Cornel West for a dialogue on the “power of religion in the public sphere,” in an event cosponsored by the SSRC, New York University’s Institute for Public Knowledge, and Stony Brook University.—ed.