Secularism’s enchantments and disenchantments: A reply to Goto-Jones and Zhan 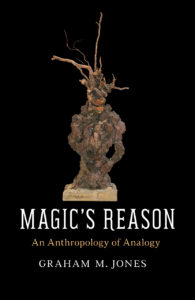 Read side by side, these two stunning commentaries on Magic’s Reason—for which I am immensely grateful—both seem to revolve around an implicit antinomy between what I might call symbolic care and symbolic violence. To think is to compare, Mei Zhan tells us; to compare is to produce similarity and difference, commonality and alterity. To interact—as a close-up magician might with a spectator, in Chris Goto-Jones’s telling—is to enact comparisons between self and other. Comparison carries both logical implications and moral weight. When do our comparisons ennoble and empower, spark creativity and create possibility? When do they mangle and maim, stifle thought and limit freedom? Like anything that imposes order, comparisons may effect care and violence simultaneously. Can we disentangle these valences? How should we social scientists approach comparison—and particularly comparison in the form of analogy—as both thinking subjects and moral agents?

Pondering her daughter’s curricular materials that teach analogy as a basis for scientific thought, Zhan asks, “As a scholar looking for the non-modern within the interstices of the modern, am I nevertheless on my way to producing another modern ‘subject’?” This question really hit home for me as a parent of elementary school aged kids. How can we be sure that the styles of thought our children learn correspond to the values we aspire to teach? And when does the care that well-intentioned (and well-resourced) parents inevitably invest into a child’s education veer into the individuated violence of indoctrination or the collective violence of social reproduction?

Goto-Jones calls attention to a different form of violence masquerading as care—which, in this case, we also see directed toward children. He retraces the steps of the contemporary magician David Blaine, who appropriates misapprehensions of magic among people in the global south to manufacture entertainment for audiences in the global north. It may be “good” because it is “fun,” but the fun is at these hapless spectators’ expense.

Both Zhan and Goto-Jones reflect, quite trenchantly, on the power of analogy—whether inscribed in school curricula, enacted in magical performance, or instantiated in anthropological analysis—to function as either liberatory or oppressive. Goto-Jones raises a challenging critique of Magic’s Reason in this regard. Expressing concern “about the way the category of ‘primitive’ or ‘primitive magic,’ even when deployed so carefully into a matrix of analogy and disanalogy, risks enabling the persistence of a form of colonial modernism.” He even suggests that “the graceful, formal charm and dexterity” of my comparisons may “misdirect us from (and perhaps vanish) this important ethical critique.” By analyzing the symbolic violence of colonial analogies, have I inadvertently perpetuated it?

In posing this question, Goto-Jones places his finger on a substantial problem. I worried about it considerably when writing this book—in dealing with visual data, for instance. Some of the images I analyze and reproduce are so ideologically charged with colonial contrasts that I worried they would buoy forth ideas that my textual critique would not be able to constrain. I insisted on such an ambiguous, abstract, and, indeed, somewhat unprepossessing (my kids hated it!) image for the cover that would not naturalize the categories of modern or primitive I hoped to deconstruct. One of my arguments is that in visualizing these categories, we have learned—through the classical imagery of magic and anthropology—to use stubbornly colonial registers, and I wanted to interrogate the industries and institutions that have historically scaffolded such uses. As a writer, I tried my best to show that, as a purely intellectual problem, magic—particularly in its conceptual association with science and religion—is truly inseparable from the material violence of the colonial situation.

In differentiating between a modern magician, for whom disenchantment is an ethical imperative, and a contemporary magician, who gleefully abrogates it, Goto-Jones makes a very clever point that requires some additional clarification on my part. A Weberian ideal-typic approach is implicit in my mode of analysis: the “modern magician” is an ideal type that may never be perfectly realized in an unalloyed form—not by Jean-Eugène Robert-Houdin or anyone else. Indeed, on my reading, Robert-Houdin was perhaps as much an amoral charlatan as Blaine, if not more. It is often unclear whether magicians hold the deontology of modern magic to apply universally across different spaces of performance, or rather choose to uphold it selectively, with its force trailing off, for instance, in colonial and post-colonial peripheries. Moreover, there are contemporary magicians—I think for instance of Nate Staniforth, author of a beautiful memoir about his encounters with magicians in India—who adopt an ethical stance diametric to Blaine’s, but seem beholden to a decidedly modern anti-modernist romanticism. As with Platonic forms, so with ideal types—the realities are messy.

Still, Goto-Jones’s point holds: How do you talk about the social life of problematic categories without reifying or reproducing them? How do you analyze an oppressive analogy without, in an insidious way, reinscribing it as a plausible—if not credible—comparison? Zhan offers a compelling response to this problem—one that is narrowly applicable to the specific disciplinary trajectory of anthropology, and broadly applicable to the way that people in general go about making sense of the world with analogies that may do more harm than good. Zhan brilliantly catalogues the analogical longings for something “more rational, more secular, more masculine, and more prestigious” that shaped anthropology’s formative years. In showing us how to resist these temptations, she says, Franz Boas helped chart a path toward a much more care-ful way of using comparison. I am gratified that she situates Magic’s Reason as a step, however humble, along this path, calling it a reminder that “analogy . . . is a set of power-laden, ongoing projects of cultural production in which affinities, orientations, and commitments are sorted out.”

I am not sure that is enough to dispel Goto-Jones’s concerns. But, as an anthropologist, I cannot help but agree with Zhan that “I cannot imagine a world or an anthropology without analogies.” And I cannot help but be inspired by her exhilarating suggestion that each analogy “tells a story of its own that extends into other relations, comparisons, and ways of thinking and being . . . where . . . complex possibilities of worldly imagination emerge and unfold.” Analogies are an inevitable element of thinking, as a social scientist or otherwise. Their liberatory or oppressive potential emerges in the associations we choose to forge, and the pathways of correspondence we choose to follow—without ever really having the benefit of fully grasping the complex potentials of the inchoate relations our comparisons engender. In that sense, I hope that Magic’s Reason, far from “vanish[ing] . . . ethical critique” makes ethical critique all the more apparent as a possibility immanent in every comparative juncture.

A tension between care and violence is inscribed within the category of magic itself as it has come down to us through a long historical pathway of inter- and intra-cultural comparisons: in the name of secular progress, modern magicians and colonial anthropologists paternalistically framed projects of disenchanting primitive magics as a mode of ethical care for cognitively deficient publics. From a postmodern, postcolonial perspective such efforts to delegitimize cosmological alterity and impose a secular norm are hard to characterize as anything other than symbolic violence.

In anthropology, magic has always been a microcosm for thinking about bigger things: rationality, knowledge, and belief. We anthropologists may not worry as much today about defining magic, but in this volatile, fake-news, post-truth era of populist demagoguery, the problem of dealing with others’ seemingly irrational beliefs—with cosmological alterity—is more important than ever for us, secular modernity’s ambivalent heirs. I teach an anthropology course called Magic, Science, and Religion at a technological institute. As a final project, I have my students—all supremely rational scientists and engineers—write the ethnography of a science denialist movement. Some find the temptation to scoff irresistible, scouring the internet for the farthest-fetched fringe beliefs. But those who try in earnest sometimes end up finding that denialists’ perspectives are at least as compelling and reasonable as scientists’. If disenchanting the Other’s belief is one of secularism’s preferred modes of symbolic violence, affirming the validity of the Other’s belief is probably the mode of secular enchantment to which anthropological comparisons can most enduringly contribute.

Graham M. Jones is associate professor of anthropology at the Massachusetts Institute of Technology. Combining linguistic and cultural anthropology, he explores how people use language and other media to enact expertise in practice, performance, and interaction. His two monographs constitute a magical diptych: Trade of the Tricks: Inside the Magician’s Craft (California, 2011) describes day-to-day life and everyday talk within the insular subculture of contemporary French illusionists; Magic’s Reason: An Anthropology of Analogy (Chicago, 2017) examines the meaning of magic in Western modernity, shuttling between the intellectual history of anthropology and the cultural history of popular entertainment.