Networks of reception, conditions of audibility: A reply to Johnson and Walker 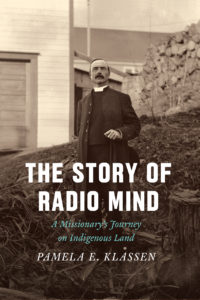 I am grateful to both Miranda Johnson and David Walker for reading The Story of Radio Mind with such generosity and attention, and for their astute comments on the theoretical and methodological interventions that I hoped would be transmitted in its telling. Their critical readings reveal the truth voiced by Walker: “People think always in relation to the networks in which they move.”

Walker’s research moves on a track parallel to my own. In his work on the building of the railroad in nineteenth-century Utah, on Shoshone and Ute land, he denaturalizes the seemingly secular bottom line of business, entrepreneurialism, and technology. To borrow his words about The Story of Radio Mind, in his own work Walker shows how Mormon settlers, entrepreneurs, missionaries, “railway surveyors and government agents mapped visions of white settlement.” He coins the phrase “would-be media of Dominion” to frame my argument about cosmologies of mediation: namely that the communication technologies of photography, printing presses, maps, and radio were tools of missionary-colonial modernity. He so handily receives and rearticulates the point of my book because it resonates with his own—grown out of other networks, on different land.

From another vantage point and set of networks also within range of my own, Johnson writes from her perspective of living and working in a “Commonwealth” settler-colonial state. In her book, The Land is Our History, Johnson shows how post-1960s Indigenous activism and legal challenges in Aoteoroa/New Zealand, Australia, and Canada were remarkably successful in challenging the “founding story of the settler state.” Johnson has reflected with great insight on the seemingly endless task of trying to figure out what one does, as a scholar, in the wake of the realization that the land on which one lives and works is both settled and stolen; that to write any stories of such land requires seeking out and listening to Indigenous narratives, and changing the settled stories in response. So, when she notes that I am “not a cynic” when it comes to thinking about reconciliation and its promises and failures, my sense is that she is not suggesting the opposite, that I am abounding with credulity.

The line between critique and credulity, or between cynicism and naiveté, is at the heart of all of the books in this forum on “modernity’s resonances.” My tack on this question follows one man on his journey from east to west, beginning on Abenaki land, which was claimed in the seventeenth century by the French Crown and then in the eighteenth century by the British Crown. As a young man, Frederick Du Vernet found his networks among Anglican clergy and the Anglo-Canadian elite in Toronto, on land bound by treaties between the Anishinaabeg, the Haudenosaunee, and the British Crown. In mid-life, he ventured to the unceded territories of the Haida, Nisga’a, and Ts’msyen on the Pacific Northwest coast, where his networks expanded in two different ways. First, as a white missionary bishop living among a predominantly Indigenous population, he learned about the diversity of their languages and forms of property, their stories of creation, and their resistance to land dispossession and to state pressure to send their children to church-run residential schools.

Then late in life and in the wake of a devastating world war, as a man coming to understand himself as at once modern, scientific, and spiritual, he entered into a publishing network of psychic researchers. He read books by men of intellectual renown including William James and Henri Bergson, who voiced anxieties about credulity while articulating profound hope for the power of telepathy and “mind energy” with worldwide effects. Embedding these psychic narratives within Christian theological commitments, he came to write with considerable confidence, and seemingly little anxiety, about having proved the power of what he called radio mind.

As the other books in this forum show, psychic research and its affiliates, such as mesmerism, magic, and later on, extraterrestrial speculation, exemplify how telling the story of modernity’s resonances requires tracing the paths of colonial resource extraction, slavery, and land dispossession. Indigenous responses to and rejection of such dispossession are also part of the story. I set Du Vernet’s “technophilic” story at this nexus of specifically emplaced and ongoing Nisga’a, Ts’msyen, and Haida land movements in the Pacific Northwest and a traveling network of intellectual and spiritual exploration with varied colonial currents.

As Walker notes, I point repeatedly to the significance of storytelling in terms of the materiality and physicality of different forms of mediation (e.g., dry-plate photography) and the ethics of relationality embedded within these different forms. In doing so, I draw not only from recent discussions of religion and mediation, but also from arguments of Indigenous novelists and scholars about the significance of storytelling as theory, method, and protocol (codes of behavior). Storytelling is always shaped by protocols of address and relationality. Learning this, I also realized that how I would tell The Story of Radio Mind was as much shaped by visiting archives as it was by my experience of telling stories to my children and of talking with Nisga’a and Ojibwe elders and historical experts.

Walker is very right that The Story of Radio Mind does not qualify as an encyclopedic title, since I only dive deeply into the radio mind part of the story in the last two chapters. As I thought about what form the book might take, I decided that I could not consider radio mind until I explained the earlier places and times in Du Vernet’s journey. I also decided that I could not tell the story if I did not venture to those same places and speak to some of the people who live there today. My travels with students and family members to the Rainy River First Nations, the Nisga’a Nation, the Ts’msyen First Nation at Metlakatla, and to Du Vernet’s episcopal seat in Prince Rupert (among other places) became part of the story of radio mind. The Ojibwe, Nisga’a, and Ts’msyen communities I visited had no memories of Frederick Du Vernet, but they did tell stories of other Christian missionaries and of the “Indian Land Movement” in museums, books, and other documents. After bringing Du Vernet’s diary of his visit to the Rainy River in 1898 to the Kay-Nah-Chi-Wah-Nung Historical Centre, I have since worked with students and community members from the Rainy River First Nations to remediate the diary as an interactive website Kiinawin Kawindomowin Story Nations.

Like Walker, Johnson also points to my persistent focus on the material forms of cosmologies of mediation, characterizing my approach more boldly than I did: “to fuse the spiritual with the material: to place the spirit of matter and matters of spirit at the center of her inquiry.” Similarly, reflecting on radio mind as a metaphor when pondering the fraught concept of reconciliation, she articulates the point of my book in ways that I did not see: “Some ‘frequencies’ are within our range of hearing and we do not have to move in order to receive them. But many others are not, and if we want to make those frequencies audible we will need to shift position, perhaps quite considerably. But how will we know if we are not hearing something? And what motivates us to orient ourselves to a different frequency?” Pointing out the political stakes of what she calls the “conditions of audibility” Johnson gets to the vulnerability of any theoretical—or spiritual—claim: if no one can hear or understand it, it will resonate with no one.

As Johnson makes clear, despite the “facticity” of colonial violence and dispossession and of the persistence of Indigenous refusal of such violence and dispossession, within settler states there are many doubters and deniers of these facts, including many scholars. It is no wonder then, as she points out, that many who do accept that facticity have rejected the concept and project of reconciliation as a “liberal ruse” that tries to “redeem” the settler state by way of a different story.

Framed in the terms of this forum, one of my primary aims in writing this book was to document how Indigenous land movements that countered and, following Audra Simpson, refused colonialism are also among the resonances of modernity. Instead of finding anxieties about credulity or naiveté when reading the stories, ripostes, and petitions of Indigenous people contesting colonialism, however, I found resolute calls to spiritual authority—both Indigenous and Christian—to claim their ground. As Nisga’a Chief Timothy Derrick put it to an Indian Agent in 1908, and as I relay in the book, the chiefs rejected the authority of the Canadian Indian Act and the Indian Agent, along with the very idea of an Indian reserve: “We have come to the conclusion therefore that it is much better for us to try to hold of ourselves the inheritance which God gave our fathers at the beginning.” Indigenous peoples continue to frame their sovereignty as a gift from the Creator, with little care for whether or not such a claim resonated with colonial secular governance. For hundreds of years, Indigenous peoples have been remarkably consistent in referring to their ongoing spiritual jurisdiction in their petitions and legal cases directed at representatives of the Crown in Canada and elsewhere.

Indigenous refusal of colonial sovereignty has long recognized the spiritual vulnerability of colonial settlement. Indigenous leaders such as Derrick regularly clarified to colonial officials that the Crown’s claims to own the land were rooted not in secular law but in Christian doctrines of discovery. They also repeatedly used such doctrines to call to account the Dominion government, whether citing biblical injunctions to not “remove thy neighbour’s landmark” or referencing King George III’s Royal Proclamation of 1763.

The spiritual vulnerability of colonial settlement, I would argue, is one important reason why both Christian and secular condemnations of credulity and superstition have long been so anxious, and so resonant, in colonial modernity. As the persistence of Indigenous spiritual jurisdiction shows, however, even if those living in settler-colonial states use concepts such as property, law, and secular reason to close their ears to the steady hum of Indigenous presence on the land, the vibrations refuse to go away.

Pamela Klassen is professor in the Department for the Study of Religion at the University of Toronto. Her most recent books are The Story of Radio Mind: A Missionary’s Journey on Indigenous Land and Ekklesia: Three Inquiries in Church and State, coauthored with Paul Christopher Johnson and Winnifred Fallers Sullivan. She is the coeditor, with Monique Scheer, of The Public Work of Christmas: Difference and Belonging in Multicultural Societies. Her collaborative digital humanities project, “Kiinawin Kawindomowin Story Nations” can be found at storynations.utoronto.ca.